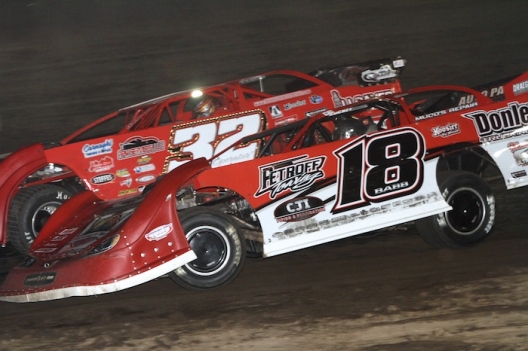 PEORIA, Ill. — Passing was at a premium Saturday at Peoria Speedway for the eighth leg of the UMP DIRTcar Summernationals, but once Shannon Babb figured out his best move, he couldn’t be stopped.

The 41-year-old driver from Moweaqua, Ill., became the tour’s first two-time winner in 2015 with a pair of crossover moves on the frontstretch that took him past Ryan Unzicker and then leader Bobby Pierce over an eight-lap stretch en route to victory.

Along with his $5,000 paycheck, Babb got the honor of tying Billy Moyer of Batesville, Ark., as the all-time winningest Summernationals driver with 89 victories as the long-time competitors continue a seasons-long, back-and-forth duel for the top spot.

“There’s been a lot of blood, sweat and tears that go into this Summernationals racing, and I think Billy’s, when I started this thing like everybody else, he was the man to beat,” said Babb, who won the previous series event Saturday at Fairbury (Ill.) American Legion Speedway. “He was out here winning these every night, and it’s pretty cool to be even with him.”

The polesitting Pierce, the series points leader from Oakwood, Ill., settled for the runner-up spot, three seconds behind Babb while Unzicker, of El Paso, Ill., was third. Eighth-starting Dennis Erb Jr. of Carpentersville, Ill., was fourth and fast qualifier Billy Moyer Jr. of Batesville, Ark., rounded out top five finishers at the quarter-mile oval which drew a series-high 48 entrants along with a big crowd.

Unzicker got the jump on Pierce from outside the front row and led two laps, but Pierce took command on the third lap and stretched it to a full straightaway lead within five laps. With Unzicker holding onto second in the same low groove that Pierce was running, Babb was searching for a faster way around, running right against the outer wall in turns three and four.

After the first of three cautions, Babb navigated that cushion in turns three and four to close in on Unzicker. When the second-running Unzicker exited turn four and drifted toward the frontstretch wall, Babb abruptly cut down to the low groove — nearly touching the rear of Unzicker’s car — and dove under him in turn one on the 11th lap.

Then after running second for eight laps, Babb duplicated the crossover move on Pierce, diving inside the leader in turn one and emerging with the lead a half-lap later.

“The moisture, it was soaking in around in the wall at the top of (turns) three and four, and (turns) one and two, but one and two falls off the banking on exit, but three and four was awesome,” Babb said. “I started fourth and I was in the right position to find that line, and I was able to my way around them guys.”

Pierce wasn’t sure what kind of challenge he’d be facing near the halfway point of the 40-lapper.

“I saw my dad giving me signals that someone was approaching me, and I didn’t know who it was,” Pierce said. “The last thing I knew was that Ryan was behind me, so I thought it was him. Then I saw that red nose coming and I knew it was Babb.

“He just found a line there that no one else found. I’m not sure if he found it before he passed me, or what.”

“It’s tough when you’re leading them things,” Babb said. “I’ve done that before. You’re sitting there driving the best line you can and momentum, he was doing a great job, and I had nothing to lose but to just move around and try to find a way. I got a good run on him and tucked down there in one and two and got around him.”

Pierce, who extended his points lead on his closest pursuer in Moyer, said his car’s handling wasn’t as good as he’d have liked.

“I think we went in a little too tight. I couldn’t turn getting in, and I had to sling it and we had no traction coming off,” he said. “Babb did a heckuva job and we’ll settle for second. It’s a good finish.”

Three cautions slowed the action, none for serious incidents. Billy Drake pulled up lame to draw a lap-10 yellow. A lap-16 caution appeared when Pierce spun the slower John Hahler exiting turn four. And Steve Thorsten had a flat tire on lap 20.

Summernationals competitors head to Belle-Clair Speedway in Belleville, Ill., on Wednesday for a $5,000-to-win event.

Notes: Babb won his fourth series race at Peoria. He previously won in 2005, ’06 and ’11. …  Mike Spatola pulled to the pits before the four-wide parade lap and his crew pushed him back onto the track just before the green. … Scott Schmitt retired after one lap. … Eighteen of 22 starters were running at the finish.

Making his frequent high-side challenges work, fourth-starting McKay Wenger went around John Gardner Jr. on the ninth lap and pulled away for a 12-lap victory. Gardner held off Charley Hess and Donny Walden for the final transfer spot. Chuck Mitchell and Charley Hess got together on the first lap to draw a caution, resulting in Scott Schmitt's backstretch spin. Austin Simpson and Gordy Gundaker tangled in turn two for a lap-six yellow.

Ray Guss Jr. made the outside groove work in winning the third heat, winning a first-lap, side-by-side duel with fast qualifier Billy Moyer. He wasn’t really expecting it. “I was shocked myself,” Guss said, adding that he felt the traction in his right-rear tire. “I thought then we had something.” After that, “I kind of went into protection mode and stayed on the bottom,” but Guss hopes the crumbs blow off the top groove in the feature. “Let’s hope so and get some racing out of it.”. … Louisiana native Timothy Culp had a scare when he first got up to speed in his Peoria debut: he didn’t have brakes. In hot laps, Culp roared down the frontstretch and had his scare. “I just turned as hard as I could and it went backwards to the wall,” he said. Fortunately, a replaced bumper and banging out the quarterpanels took care of the damage. A broken right-front caliper fitting was the culprit. He went on to post a third-place finish in his heat to transfer to the main. … Guss and Ryan Unzicker scored their first heat-race victories on the tour.

In the redraw among heat winners, Bobby Pierce got the pole position with Ryan Unzicker alongside. Ray Guss Jr. and Shannon Babb make up the second row.

Ryan Unzicker continued the trend of outside front-row starters getting the jump, edging away from Dennis Erb Jr. after they run side-by-side down the backstretch on the opening lap. Erb stayed close but never seriously challenged Unzicker the rest of the way while third-starting Kevin Weaver was just behind in third. Jim Moon was in danger of losing the fourth spot early, but he fought off McKay Wenger and transferred to the main  in the caution-free prelim.

Outside front-row starter Ray Guss Jr. powered around fast qualifier Billy Moyer Jr. on the first lap, nipping him at the line and pulling away from an easy 10-lap victory. Moyer spent the rest the race fending off Roger Rebholz, who settled for third, while Todd Bennett got the final transfer spot with a last-lap pass of Chuck Mitchell. The first start was called back and a second caution flew on the fifth lap when Kyle Logue ended up facing the wrong way inside the turn-four exit after tangling with Kolby Vandenbergh.

Polesitter Shannon Babb cruised to a 10-lap victory, keeping Michael Kloos in check all the way. Kloos got second with Timothy Culp a solid third in his Peoria debut. Further back, Steve Thorsten fought off challenges from John Gardner Jr. to hold onto the final transfer spot. A lap-four caution waved when Mike Spatola got the worst of contact with Jake Little, sending him into the infield; both restarted on the tail.

In a race of front-row starters who posted identical qualifying times, outside starter Bobby Pierce got the jump and cruised to victory over Brandon Sheppard. Jason Feger couldn't keep up with the frontrunners finsihing third while Billy Drake got the final transfer spot in the 10-lapper. The first start was scrapped when Ryan Little got out of shape in turn two and stopped.

Billy Moyer Jr. of Batesville, Ark., topped 48 qualifiers Tuesday at Peoria Speedway, earning the pole position for the first of four 12-car heat races. Moyer tripped the clock at 12.975 seconds on the quarter-mile oval, the only driver below the 13-second barrier.

The top four drivers from each heat transfer to the main event with heat winners drawing for the first two rows. A C-main sends four cars to a B-main, which sends two cars to the main event. Four provisionals round out the field.

After teams escaped the storms that rained out Monday’s program at Quincy (Ill.) Raceway — some pulled out of the muddy pits — a beautiful evening at Peoria Speedway awaits for the seventh leg of the UMP DIRTcar Summernationals with 48 Late Models in the pits.

With weather claiming four of the last seven events, the tour will try to get back on track at a track that has hosted the series every season but one going back to 2000.

A new winner on the series would match the longest stretch of consecutive races without a repeat winner — eight — in 1998 and 2000.

Bobby Pierce of Oakwood, Ill., brings a 17-point lead over Billy Moyer Jr. of Batesville, Ark., into Peoria. Neither have series victories at the track.

Time trials, heat races and consolation races will set the 22-car field for the $5,000-to-win event.

Peoria, no doubt helped by perfect weather and drivers with a hankering to race, has drawn a surprising 48-car field, topping Fairbury’s car count by one. … Mike Provenzano was the last entrant. … Kyle Logue of Cisco, Ill., is piloting Larry Riekart’s No. 94 (previously driven by Wes Steidinger). Logue finished second in Peoria’s opener. … Nearby drivers and brothers Steve Lance Jr. and Tim Lance are surprising no-shows. … Donny Walden of Towanda, Ill., who races infrequently, knows he and lots of other drivers face a test in making the feature field. “On the night I come everybody’s here,” Walden cracked. ... Peoria drew just 26 cars in 2013 and 33 last year.