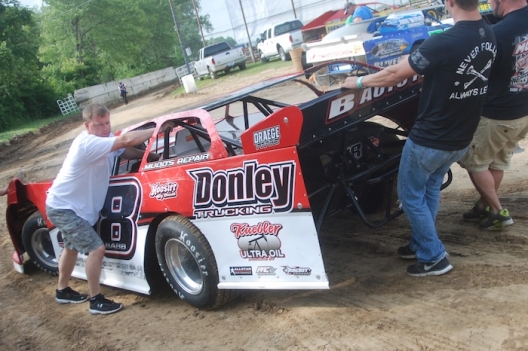 As the consolation was headed onto the track about 8:40 p.m., track officials stopped the program and asked all event attendees to seek shelter because of an approaching storm.

Jason Feger got the jump from outside the front row and raced to a victory over polesitter Brandon Sheppard. who made a few serious bids for the lead. Tyler Erb, who was running fifth with two laps remaining, got third when Justin Reed spun out of fourth and picked up another spot when he slid under Ryan Unzicker. Unzicker got the final transfer spot. The first start was called back for Sheppard jumping the start and a lap-eight caution appeared when Joseph Hughes stopped exiting turn four. The final yellow flew for Reed's spin on a lap-eight restart.

Polesitter Billy Moyer Jr. fended off repeated challenges from fourth-starting Dennis Erb Jr. to win the third heat. Moyer held the high line and Erb did his best to work underneath in the corners without any luck. Richard Frost finished third while Larry Greer got the final transfer spot after Dustin Griffin blew up a left-rear tire on the ninth lap. Timothy Culp made a hard run at Billy Moyer Jr. on the first lap, but pulled up with a flat left-rear tire on the second lap. Another caution appeared on the third lap when Dustin Griffin got sideways and Larry Greer ended up spinning over the turn-four banking, and a final yellow appeared a lap later when Culp tried to rejoin the race.

Gordy Gundaker led all the way from the pole, pulling far ahead of a tight battle for second among Keith Pratt, Chuck Mitchell and Kyle Hammer. Pratt nipped Mitchell for second at the finish while Hammer held on for the final transfer spot. Jim Moon was further back in fifth. The first start was waved off when Keith Pratt got bogged down in the thick turn-two cushion.

Polesitter and fast qualifier Bobby Pierce led all the way in the first 10-lap heat. Fifth-starting Shannon Babb, slid under Denny Woodworth in turn one on the second lap, then stole second from Jason Perry with a lap-seven slide job after a feisty battle for the runner-up spot. Perry nearly lost the third spot to Mark Burgtorf, who tried a last-lap slide job in turn four, but Perry answered to get back ahead at the checkers. Three cautions slowed the action. Charles Van Zandt drew the first yellow on the seventh lap, then on the restart Mark Burgtorf and Denny Woodworth tangled exiting turn four, scrambling the back of the pack and ending Woodworth's race. Jamie Wilson slid over the turn-two banking on the next attempted start.

Series points leader Bobby Pierce of Oakwood, Ill., topped 33 qualifiers Monday at Quincy Raceway to earn the pole position for the first of four heat races. Pierce posted a lap of 13.511 seconds at the 3/8-mile oval.

The UMP DIRTcar Summernationals is looking to break the tour's record of consecutive different winners at the start of the series with Monday’s event at Quincy Raceway. Seven drivers have won seven races so far on the month-long series, including Shannon Babb’s $10,000 victory Saturday at Fairbury (Ill.) American Legion Speedway that tied a 1997 mark.

A new winner on the series would match the longest stretch of consecutive races without a repeat winner — eight — in 1998 and 2000. (Former champions Rick Aukland and Kevin Weaver were among winners in the ’97, ’98 and ’00 streaks.)

Time trials, heat races and a consolation race will set the 22-car field for the $5,000-to-win event.

Brian Diveley's car barrel-rolled through turn three during time trials. The car ended up on its wheels and he climbed out unharmed. ... Shannon Babb’s wife Emalie was scheduled to go home from the hospital today after delivery their baby girl on Friday. Grandmas are helping tend to her and Babb was shooed away. “They said they’d kick my ass if I didn’t go racing, so I said, 'OK, I’ll leave.' ” … Larry Greer of Bowling Green, Ky., is tackling a week of the series solo, traveling without a single crew member. He’ll get some help when the tour gets to Clarksville, Tenn., on Thursday. He’s driving a Longhorn Chassis he bought from Billy Moyer Jr. last fall … Jason Perry of Payson, Ill., is making his first start of 2015. He just received a new hauler last week and he unloaded a new Pierce Race Car out of Jason Feger’s shop. “What a night to shake down a new car, right,” a crew member cracked. … Dustin Griffin of Camp Point, Ill., a former series regular, is making his first series start of 2015 and just his fourth start of the season overall. ... Quincy hosts the World of Outlaws Late Model Series on July 23.