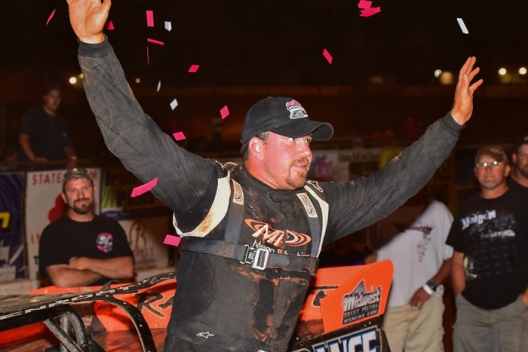 Davenport steadily steered his K&L Rumley Longhorn Race Car forward on the 3/8-mile oval, finally diving underneath race-long pacesetter Chris Ferguson of Mt. Holly, N.C., in turn one on lap 45 to grab the lead. He pulled away over the remaining circuits to scored his record fifth straight Lucas Oil Series feature and a $10,000 top prize, pushing the total earnings for his nine straight wins — highlighted by his June 6 Dream victory at Eldora Speedway in Rossburg, Ohio — to $172,545.

“Wow,” Davenport said, awesome awestruck over his latest success as rain fell on him in victory lane. “Man, what a roll we’re on. I’m still speechless. I wanna race every night.”

Davenport might have pulled off his most impressive triumph of the string at Cherokee, a track he called “almost one of my home tracks now.” Pefectly blending speed and aggressiveness with a cool, calm approach, he kept his car’s tires under him and came from mid-pack to mount a final, deciding push for victory in the closing stages.

“This one wasn’t given to me,” said Davenport, who started a tripleheader Lucas Oil Series weekend in the Southeast with a victory on Thursday night at Fayetteville (N.C.) Motor Speedway. “We didn’t start on the front row.”

After the last of seven caution flags flew on lap 40 for Brandon Sheppard of New Berlin, Ill., Davenport found himself in position to go for the win. He took full advantage of it, pulling off a textbook slider on Ferguson in turn one with five circuits remaining to seize control for good.

“I’ll tell you what, that just took a lot of patience right there,” Davenport said of his road to victory. “I knew when we rolled out here we were too hard on right-rear tire, so I just managed it those first 15 laps and tried not to burn the edges off and blister it — and man, this thing come alive later.

“I seen everybody getting looser and looser, and I could just use less throttle and drive right to ‘em. I knew they had done hurt their tires so it was just a matter of time. As long as the cautions fell right, I could drive right up through there.”

Davenport could smell another victory when he pulled close to Ferguson, who set a new track record in time trials and started from the pole position in his Longhorn machine.

“I almost got too excited there a couple times,” said Davenport, whose seventh Lucas Oil Series win of 2015 added to his points lead as his chases his first national touring crown. “I just had to tell myself to slow down.

“I found a little lane here coming off (turn) four. I could move out and get a good run, and I knew (Ferguson) was running the top down here (in turns one and two) … and that was the only way I was gonna pass him, was slide him, and I hope I gave him enough room. Me and him usually race pretty clean together.”

Ferguson made a strong bid for his third five-figure score of 2015, but he simply had no answer for Davenport — a fate drivers across the country have faced for the past month.

“Them late-race cautions kind of hurt us,” Ferguson said, noting slowdowns on laps 32 and 40. “I was a little bit softer on my left-rear and right front, but I ain’t gonna make no excuses. I should’ve moved up in three and four and I think I would’ve been fine, but he slid me pretty clean and that’s just racing. I just couldn’t hold him off — he is the best driver in the country right now.

“We had a great car all night long, so what can you say?” he added. “I wanted to win this race bad … we had a lot of fans here. We came so close to getting our first Lucas Oil victory, so it is a bit heartbreaking. Even still, second-place against these guys says something about our race team. We never give up.”

Notes: Jared Landers of Batesville, Ark., and Jimmy Owens of Newport, Tenn., each ran as high as second but were early retirees due to mechanical trouble. Landers brought out a caution flag on lap 18 while Owens slowed one circuit later. … Other cautions were caused by Scott Bloomquist of Mooresburg, Tenn., who triggered a slowdown on lap 19 but returned to finish 13th; Josh Langley of Lancaster, S.C.; Sheppard; and Steven Roberts of Jesup, Ga. (lap 46). .... The race paid tribute to the late father of Hall of Fame driver Freddy Smith. … The Lucas Oil Series weekend concludes on Saturday night with a $10,000-to-win event at Smoky Mountain Speedway in Maryville, Tenn.