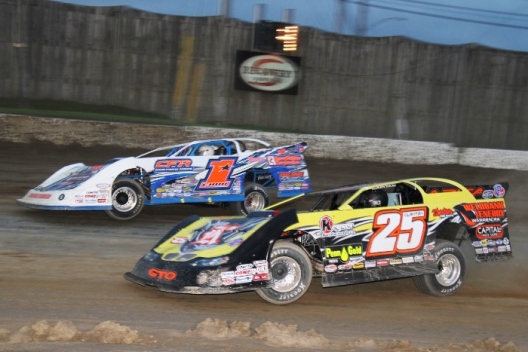 FONDA, N.Y. — Just as the World of Outlaws Late Model Series enters a busy stretch of early-summer action, Shane Clanton is showing signs of another potential hot streak on the national tour.

Clanton, who jumped out to an early lead in this year's WoO championship chase with four victories in the tour's first seven races, returned to victory lane for the first time since his February win streak Thursday night at Fonda Speedway with a dominating performance in the opening round of the four-race Great Northern Tour.

The $8,550 victory stretched Clanton's lead in the WoO standings to 98 points and gives the 39-year-old Zebulon, Ga., racer plenty of momentum as the tour tackles a stretch of seven races in 10 days between the four-race Great Northern Tour and Lernerville Speedway's three-race Firecracker 100 weekend presented by GottaRace.com.

"Maybe we can get on another roll here and just win all of them," said Clanton whose fifth WoO victory of the season marked the 25th series triumph of his career. "We're working on stuff we've been doing all year long and just making minor adjustments. Tonight really suited our race car. Hopefully this is a sign of more things to come."

After taking the lead from outside polesitter Brandon Overton of Appling, Ga., on lap eight, Clanton cruised through the remainder of the 40-lap race in his Weldbank Energy-sponsored Capital Race Cars house car. He pulled away on each of the race's four restarts and built leads of more than a straightaway on the sprawling half-mile oval before ultimately crossing the finish line nearly seven seconds ahead of Chub Frank of Bear Lake, Pa.

In scoring his 14th top-five finish in 17 races this season, Clanton took even firmer control of the points battle thanks to both his strong performance and a turn of bad luck for championship rival Josh Richards of Shinnston, W.Va.

Richards, a three-time WoO champion, was leading his heat race during Thursday's prelims when his Rocket Chassis house car suffered mechanical woes, forcing him into a backup car and a 24th starting spot for the A-Main. Richards was able to rally to a seventh-place finish but dropped another 14 points to Clanton, who's continuing to inch closer to his first WoO title.

Starting from the pole, Frank was in prime position to end his nearly six-year WoO winless streak, but he couldn't keep pace with Clanton. After losing second to Junghans on a mid-race restart, Frank took the spot back on a later restart and held it until the finish.

"We had nothing for Clanton," said Frank, who notched his sixth top-five finish of the season in his Sorbera Family Chiropractic-sponsored Longhorn Chassis. "He definitely had everybody covered. We were just trying to get to second.

"Chase took the inside for the second (restart). I don't know what he was thinking because he beat me on the outside (on the first restart). I never gave it up like that. I was taking the outside every time."

Junghans noted his mistake of choosing to restart on the bottom lane and was disappointed not to complete a first-and-second sweep for Capital Race Cars, but the second-year WoO regular was otherwise pleased with his solid performance in his first ever visit to Fonda.

"It definitely helps coming out of the box on this big swing with a good run," said Junghans, who notched his second consecutive top-five finish in WoO action. "Hopefully we just keep on building off of it and get a W before we go back home.

"Me and Clanton were joking before we came out that we were gonna run one-two. I thought I had it, but on that restart I should've taken the top I guess. I tried everything to get back by him, but I couldn't get it done."

Darrell Lanigan of Union, Ky., advanced from his 10th starting spot to finish sixth, holding off a late challenge from the hard-charging Richards. Eric Wells of Hazard, Ky., was eighth with Morgan Bagley of Longview, Texas, ninth and Rick Eckert of York, Pa., fifth.

Billy Decker of Unadilla, N.Y., started the evening off by lowering the Fonda Speedway Late Model track record in time trials, but his night ended early after he suffered engine problems in his heat race. Decker's lap of 17.135 seconds topped the previous record of 18.367 seconds set by Jimmy Owens of Newport, Tenn., in 2010.

The race was interrupted on four occasions. The first yellow flag was for Overton's lap-nine run-in with Greg Oakes of Franklinville, N.Y., while Bryan Bernheisel of Lebanon, Pa., slammed the wall exiting turn-four on lap 18 to bring out the second caution.

Dan Stone of Thompson, Pa., got the worst of a lap-22 tangle with Jim Bernheisel of Lebanon, Pa. Contact between the two cars in turn one squeezed Stone's machine into the wall and sent him into a slow rollover. He was OK.

The Great Northern Tour heads to Ontario, Canada, next for events at Brighton Speedway on Saturday and Cornwall Motor Speedway on Sunday. The northern trek wraps up back in New York on Tuesday at Weedsport Speedway.