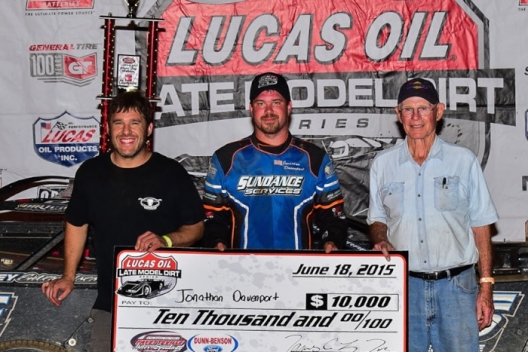 FAYETTEVILLE, N.C. — There may not be many phone booths left in Fayetteville, but Superman jumped out of one Thursday evening and headed for Fayetteville Motor Speedway.

Jonathan Davenport of Blairsville, Ga., who carries the nickname of the superhero, continued his unimaginable hot streak by overtaking Earl Pearson Jr. of Jacksonville, Fla., after a mid-race restart and cruising the rest of the 50-lapper to extend a personal winning streak to eight features in a row.

The Lucas Oil Late Model Dirt Series points leader extended his margin on Pearson in the title with his fourth series victory in a row and 10th of his career, earning $10,000 in the Dunn-Benson Ford Wayne Gray Memorial.

“I think I’m finally getting used to doing all this,” Davenport quipped in victory lane after reeling off thanks to Longhorn Chassis, car owners Kevin and Lee Roy Rumley and a litany of sponsors on his No. 6 car that’s been unbeatable over the last month.

“This Longhorn has just been something incredible here lately … I just can’t thank everybody enough for giving me this opportunity,” said Davenport, adding his concern for tire wear in the race’s late stages. “We got going there (after taking the lead on lap 28), I rode hard for probably five laps there, and then I just backed it down, and then I saw my (crew) guy on the back straightaway was saying they were closing back up on me, so I was sort of going a little bit harder, but I started feeling my right rear (tire) vibrate, so I knew if I just kept it in the bottom, we were blowing up enough dust that nobody could roll me on the outside.”

“On that restart, I just protected the bottom and he just made it work up top there and drove around us,” Pearson said. “But all in all, a good run for us. One helluva crowd here and we’ll just go on to (Cherokee Speedway in) Gaffney (S.C.) tomorrow and see what we can do there.”

Francis improved six positions in posting his best series finish since Feb. 11 while Bailes came from the 11th starting spot to round out the top five. Polesitter and fast qualifier Justin Labonte led the first five laps but faded to finish seventh.

While Labonte got the jump on his fellow front-row starter Pearson at the outset, Davenport slipped high from outside the second row, dropping back to seventh when the field passed the flagstand the first time.

The eventual winner was still struggling when Pearson went past Labonte on the backstretch after an early restart while hometown favorite Scott Autry, Francis and Casebolt dropped Labonte back to fifth a lap later.

Davenport got up to fourth by the 21st lap, just before Autry’s crowd-pleasing run ended with mechanical problems, knocking him out of the second spot as he was closing on Pearson.

On the restart, Davenport blasted the high side in turns one and two, nipped Pearson at the line the next time around, and began pulling away to continue his career-best Late Model win streak.

“I screwed us up there on that first lap, then I done it again,” Davenport said. “But I knew the top (groove) getting into (turn) one here would come back. Everybody kept slowing down trying to roll that bottom and go under that hole, and I just picked my time, and man, it just worked out.

“We got to third at the perfect time. Steve told the bottom there and that gave me on the outside. We got a good restart, and I said, 'Well, I’m already this far, I’m going to go ahead and blow her off in here and see what we’ve got.' ”

Pearson was committed to sticking with the lower groove.

“I knew we didn’t want to see that (caution),” the runner-up said. “Any time you get double-file, somebody can get a run on the top there when you want to protect the bottom — and that’s what he did. He made it work.

“At least we could stay within five or eight car lengths of him. I don’t think we couldn’t gotten back around him without lapped traffic or something like that. He’s doing one heckuva job right now. We’ve gotta go home and do our homework and get a little bit better.”

Notes: With rain threatening the program, Thursday’s heat races were scratched and the feature was lined up based on time trials. … Lauren Longbrake drew a caution on the first attempted start. … Scott Bloomquist pulled to the pits and never returned, failing to complete a lap. … Michael Marlowe drew a caution on lap five. … Don O’Neal went to a backup car after problems in hot laps; he was among early retirees.