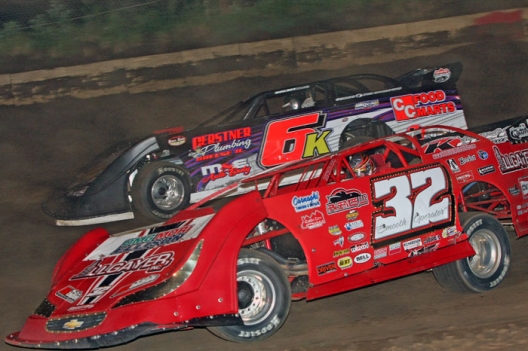 JACKSONVILLE, Ill. (June 16) — Bobby Pierce certainly felt he was due for a win on the UMP DIRTcar Summernationals trail.

But breaking through for his first Hell Tour victory of 2015 in Tuesday night’s 40-lap Wildman Kelly Classic at Jacksonville Speedway? That definitely surprised the sensational 18-year-old driver Oakwood, Ill.

“This isn’t a track I really expected to win a race at,” Pierce said after scoring a $5,000 triumph at the high-banked, quarter-mile oval that padded his early points lead on the month-long Summernationals series. “I’m normally good on these small tracks, but I haven’t been good here before … so this win is pretty shocking to me.”

Pierce handled the bullring with relative ease. He charged past race-long pacesetter Michael Kloos of Trenton, Ill., to assume command on lap 11 and never looked back, driving away from the pack to capture the caution-free event by 2.651 seconds over Summernationals rookie Timothy Culp of Prattsville, Ark., who recorded a career-best finish on the Hell Tour.

Reigning Summernationals champion Shannon Babb of Moweaqua, Ill., settled for a third-place finish — the same spot in which he started — after his repeated bids to overtake Culp during the race’s second half fell short. A late-charging Jason Feger of Bloomington, Ill., finished fourth after starting ninth, while Kloos slipped to fifth in the final rundown after starting from the outside pole and leading laps 1-10 in his debut run at Jacksonville.

Pierce managed to tame the challenging track, which developed an unruly top side after being drenched by heavy for most of the previous day.

“The cushion was the main thing,” Pierce said after registering his sixth career win on the Summernationals. “It was like a curb out there, and running 40 laps on that, you don’t want to use your stuff up. But you also know that you can gain three-tenths (of a second) if you really go for it and hit it just right, so there’s a fine line there of going for it and being real cautious with your stuff.

“Once I knew I had a big lead (from signals provided by his father Bob) I kind of slowed down a little bit to save my stuff a little bit.”

Pierce ran hard to get in the lead, however. After starting from the pole position but getting outgunned for the top spot at the initial green flag by his front-row mate Kloos, Pierce stalked the pacesetter until finally slipping underneath to move ahead on the 11th circuit.

“It’s always better to be second than first in those situations, especially where you got some of the lapped cars running three-wide (in front of the leader),” Pierce said. “I just kept digging on the bottom and he kind of got stuck in the middle. That’s what happens when you’re in the lead and you don’t know what the second-place guy is doing.”

With no one stepping up to threaten him in a race that took about 10 minutes to complete, Pierce cruised to a victory that gave his Summernationals championship chase a big shot in the arm — even if Jacksonville was just the fifth event of the 27 now scheduled to comprise the series.

“It’s definitely a plus,” said Pierce, who drove his predominantly red Bob Pierce Race Car. “I want to stay consistent with this deal, and when I can get a win I’ll take it so this is an extreme confidence booster. It’s the fifth race of the tour so it’s still real early, but hopefully now we can knock off a lot more of these races.”

Culp, 24, rang up his bridesmaid finish in his first-ever visit to Jacksonville. He recovered from a broken water pump that cut short his hot-lap session at the start of the night to open many eyes with an advance from the fifth starting spot in the feature.

“I knew we had a pretty good car after the heat race, but the cushion was just so brutal I had to figure out how to get around it,” said Culp, who hopes to follow the full Summernationals schedule this season. “We started the feature and kind of got in line there. I was following Babb (in fourth place), watching where he was running, and that cushion was still kicking my butt, so I said, ‘Shoot, I gotta find some other way.’

“Some of those lapped cars in the back were running around the bottom and throwing a bunch of loose dirt right in the middle (of the track), so I just started rolling through there and I got to Babb. Then there was just a huge pile of traffic, and it just worked out where I snuck by Babb and (Billy) Moyer (Jr.) to get up to second (on laps 19 and 20).”

Culp was a straightaway behind Pierce when he reached second place, however, and never caught the caution flag he needed to erase his deficit and potentially battle for his career-first Summernationals checkered flag.

“Bobby was a pretty good ways out when I got to second and I started reeling him in a little bit,” Culp said. “He was in traffic, but so was I, so I would’ve liked to have seen a caution at the end there to at least give the fans something to see. I think we might’ve had something for him because I know he was on a little harder right-rear.

“But congrats to him. He ran a great race, and I’m happy we got to run one-two.”

“I saw Culp got to second there on my Race Monitor after the race, and that’s real good for Bob Pierce Race Cars,” Pierce said. “A one-two finish for us — that’s cool.”

Notes: With radar indicating rain moving in quickly on Jacksonville Speedway as the third Dirt Late Model heat was on the track, speedway and UMP DIRTcar officials decided to alter the evening’s planned schedule to get the full-fendered headliner underway as soon as possible. The UMP modified consolation was canceled and the Dirt Late Model teams were instructed to make a quick turnaround after the heats and immediately return to the track for feature action. … The Late Model A-Main began at 8:46 p.m. CT and ended 10 minutes later. Rain began falling moments after the checkered flag was thrown, but Jacksonville officials managed to finish the UMP modified and street stock features before the precipitation became too heavy. … Babb’s third-place finish was his best of the 2015 Summernationals. … Billy Moyer Jr. of Batesville, Ark., hustled from the sixth starting spot to second place by lap 15, but he lost the position to Culp on lap 20 and steadily faded to a seventh-place finish over the remaining distance. The primary reason for his fall was his car's bent front and, which was damaged when a lapped car forced him high and into the outside wall. … NASCAR star Austin Dillon of Welcome, N.C., wasn’t a factor in his first Summernationals start of 2015, slipping from his eighth starting spot to 12th at the finish. … Twenty-one cars took the green flag after Jake Little of Springfield, Ill., developed mechanical trouble during the pace laps and was pushed off the track. … The Hell Tour continues with Round 6 on Wednesday night at Farley (Iowa) Speedway, about four hours northwest of Jacksonville.

With rain closing in on the racetrack, officials decided to cancel the UMP modified consolation and go right into the 40-lap Dirt Late Model feature after a short break following the heats.

At 8:25 p.m., track crews were making final surface prep and teams were hastily readying their machines for the A-Main.

Bobby Pierce will start from the pole position the feature, which is expected to begin shortly after 8:30 p.m.

Billy Moyer Jr. of Batesville, Ark., established a new track record during group qualifying, turning a lap of 11.894 seconds to earn overall fast-time honors in the 22-car field. He will start from the pole position in the third heat.

Other heat polesitters after turning group fast-timers were Michael Kloos of Trenton, Ill., and Bobby Pierce of Oakwood, Ill., whose lap of 11.909 seconds just before Moyer made him the first driver to break into the 11-second bracket at Jacksonville.

Three 10-lap heat races will be contested with all drivers qualifying. No consolation will be run.

After a two-day break — for a Sunday-night rainout at Wilmot (Wis.) Raceway and a scheduled off-day on Monday — the UMP DIRTcar Summernationals returns to action with Tuesday night’s Round 5 at Jacksonville (Ill.) Speedway. The quarter-mile oval hosts a 40-lap A-Main paying $5,000 to win.

The series returns to Jacksonville for the fourth straight year and makes its seventh overall visit. Jason Feger was victorious in last year’s event.

Wednesday’s program, which includes UMP Modifieds, is scheduled to kick off with hot laps at 6:15 p.m. CT.

Bobby Pierce of Oakwood, Ill., sits atop the points standing heading into the fifth event of the now 27-race UMP DIRTcar Summernationals, leading Billy Moyer Jr. of Batesville, Ark., by a slim margin of five points (225-220). Billy Moyer of Batesville, Ark., who will not compete in tonight’s program, is third in the standings (217 points), followed by Jason Feger of Bloomington, Ill. (199) and Frank Heckenast Jr. of Orland Park, Ill. (180), who also will not enter the evening’s action. … Heavy rain that hit the track on Monday has left many areas of the pit area extremely soft, causing some drivers — including Shannon Babb of Moweaqua, Ill. — to get their haulers stuck in the muck while attempting to park. Rain is threatening the evening’s action, but as of 5:30 p.m. CT no precipitation has fallen all day. … Ryan Unzicker of El Paso, Ill., who is sixth in the points race, used the two-day break to get back to his shop and regroup after getting off to a slow start on the Hell Tour. “We scaled the car, we got the generator fixed and we got the lift (gate) fixed, so we’re ready to go,” said the rejuvenated Unzicker. “I didn’t get my lawn mowed, though. I’m gonna have to pay somebody to do that.” … A new face ready for action is NASCAR star Austin Dillon, who has his Shane McDowell-wrenched Team Dillon Racing No. 3 in the pit area for his first of three consecutive nights on the Summernationals trail. … Billy Moyer Jr. spent the past two days parked at his engine builder Bill Schlieper’s shop in Sullivan, Wis. Schlieper did some updating to Moyer’s two existing powerplants, and Moyer left with a fresh engine to put his arsenal back to three motors. Does that mean he’s ready to do the whole Hell Tour now? “We’ll see after Friday night (at Tri-City Speedway in Granite City, Ill.),” he said. “If we go to Fairbury (Ill.) on Saturday, that probably means we’ll keep going."