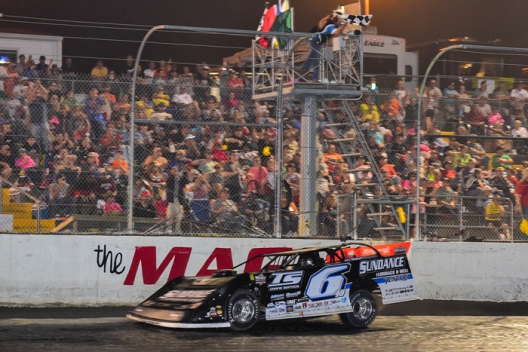 COLUMBUS, Miss. — Fourth-starting Jonathan Davenport of Blairsville, Ga., took the lead from outside front-row starter Scott Bloomquist of Mooresburg, Tenn., on the 17th lap and never looked back, racing to a $20,000 Lucas Oil Late Model Dirt Series victory in Magnolia Motor Speedway's Clash at the Mag.

Davenport, the Lucas Oil Series points leader, notched his third straight series victory and extended a personal winning streak of seven straight feature victories stretching back to the Memorial Day weekend. The victory marked the ninth of Davenport’s Lucas Oil career and his series-leading fifth of the season.

“I am so thankful to (car owners) Kevin and Lee Roy Rumley, Bryan Liverman and everybody back at the shop at Longhorn Chassis. We are a rarity in Late Model racing, building our own engines and chassis. I can't thank (Longhorn’s) Bobby and Terry Labonte enough for what they have done for our team.”

Bloomquist led the first 16 laps of the event until Davenport took command. Sheppard then moved into second with Landers close behind. Landers made his move for second after a lap-24 restart, but no one could catch Davenport.

"We got up on top and the car was just phenomenal,” Davenport said. “The track crew watered the top a little bit before the start of the race and it seemed to help. I kept pounding that cushion and at the same time was trying to keep it out of the wall. The tires held up really well. We are on a roll and looking forward to Fayetteville on Thursday night.”

Landers continued a recent resurgence with his second-place finish, his fourth top-five finish in seven starts.

"We had a really good race car,” Landers. “That was quite a race for second place all race long. Nobody has anything for that No. 6 car right now. We are making a tremendous amount of progress on this Sweet-Bloomquist car. We are getting closer to a win.”

Owens, looking for his second series victory of the season, agreed that Davenport is the driver to beat.

"We ran pretty well this weekend. That was a dandy of a race for second, but right now we are all running for second,” Owens said. “Jonathan is just flat out kicking our tails. I have been there. I know how it feels. Hopefully we can beat him next weekend.”

Bloomquist’s chances ended with a backstretch spin on the 55th lap. Neil Baggett of Shannon, Miss., rallied from 20th and into the top five early, but he got into the turn-two wall on the 26th lap. Those were among 10 cautions in the long-distance grind.