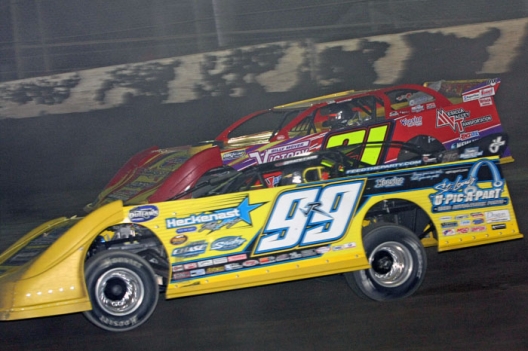 The fact of the matter, though, is that Heckenast didn’t have to pull off a race-deciding pass. When Weaver suddenly retired on lap 33 after pacing the race from the initial green flag, Heckenast inherited the top spot and cruised to his long-awaited first-ever victory on the Hell Tour.

For the 26-year-old driver from Orland Park, Ill, all that mattered was breaking through on the Summernationals.

“It’s just so great to finally get this first one,” Heckenast said after his $5,000 triumph. “I’ve been trying really hard to win one of these.”

Mike Spatola of Manhattan, Ill., briefly challenged Heckenast on a lap-35 restart but lost ground and settled for second place, 0.471 of a second behind the victor at the checkered flag. The runner-up finish came at the track where the 24-year-old Spatola won his first career Summernationals feature in the 2011 opener.

Scott Schmitt of Tonica, Ill., finished third after starting from the pole position, giving him a career-best performance in Summernationals action. He ended up with a podium finish just four days after celebrating his 28th birthday.

Bobby Pierce of Oakwood, Ill., grabbed the series points lead after two events with a fourth-place finish and Tanner English of Benton, Ky., advanced from the eighth starting spot to complete the top five.

Heckenast came from the fourth starting spot to emerge victorious. He passed Schmitt for third on lap four and overtook Billy Moyer of Batesville, Ark. — the winner of a record eight Summernationals events at Kankakee since 1987 — for second on lap 16 before catching the break of the race to assume command for good.

It was the 52-year-old Weaver who appeared primed to be the star of the evening after he swept off the outside pole to grab the lead at the start from Schmitt. Chasing his first Summernationals win since 2013 at Wilmot (Wis.) Raceway, Weaver perched his Pierce Race Car at the top of the 3/8-mile oval and kept his pursuers at bay.

But Weaver’s bid ended on lap 33 when he pulled up lame on the homestretch and drove straight off the track and into the pit area, forced out by terminal engine trouble.

“It definitely hurts,” Weaver said. “The $5,000 (first-place prize) would be nice, and of course to win a Summernationals (race). They’re always tough to win. You gotta take advantage when they come to your local track … it would’ve been nice to get a win. But at least we know we got a good car.”

Heckenast wasn’t certain of his chances to upend Weaver, but he didn’t feel about the ultimate circumstances of his accomplishment.

“I feel like I’m 40 pounds lighter,” said Heckenast, who realized another goal earlier this season when he captured his first-ever World of Outlaws Late Model Series feature in February at Bubba Raceway Park in Ocala, Fla. “It’ll take a little bit to sink in because it doesn’t even feel like I won the race. It felt like a heat race out there.

“I don’t even want to sound cocky or think we had one coming or anything, but this one (Summernationals) — I’ve been so close, so many times. I’ve had seconds, but just could never put it all together.

“Starting fourth in the heat, I really just didn’t think tonight was our night,” he added. “We didn’t change nothing on the car, just kind of put a different tire on than most I think, and everything worked out when Weaver broke. I think it would’ve been good chance it would’ve been a good race at the end (with Weaver) — I don’t know if we would’ve got him, but I could go anywhere on the track and it looked like he was kind of committed to the top.”

A regular on the WoO tour for the second consecutive season, Heckenast credited the experience he’s gained running his Club 29 Race Car on the national circuit for helping propel him to victory.

“I love the Outlaws — it’s made me better,” Heckenast said. “It took tonight to realize that.

“I’m just really excited — and I’m glad my cousin got second. It was just a great night.”

Indeed, Heckenast and Spatola are relatives, and they led the field to the finish line. Spatola couldn’t quite keep up with his older cousin down the stretch, however.

“I felt like my right-rear tire was giving up there and I knew he was on the same thing,” said Spatola, who won Kankakee’s season opener last month. “I was catching him once I got to second. I thought I could get him, but once that caution came out (on lap 35) I knew that I was done because I really killed that tire. We went back green and I didn’t have anything for him.

“I tried my hardest, but he was just a little bit better. If anyone can beat me, I’m glad it was my cousin.”

The race's only caution flag flew on lap 35 when Billy Moyer slowed with a blown left-rear tire that had been deflating for several circuits. He pitted and returned to finish seventh.

Notes: Rain began to fall during the feature's pace laps but let up enough for the race to be completed. … Ryan Unzicker of El Paso, Ill., slowed on the last lap with a flat tire but held on to finish ninth. … Defending Summernationals champion Shannon Babb of Moweaqua, Ill., retired from the feature on lap 16 due to a broken torque arm bracket on his car’s rearend. He was in action after missing the series opener on Wednesday night at Brownstown (Ind.) Speedway because of a broken transmission in his hauler en route to to the track.

With rain beginning to spit during the consolation, officials are pushing the show as quickly as possible to complete the program before the precipitation intensifies. The UMP modified feature hit the track at 9 p.m. with the Dirt Late Model headliner to immediately follow. … Scott Schmitt will chase his first-ever Summernationals feature win from the pole position after picking the prime spot in the heat-winners redraw. … Joining Schmitt on the front row will be Kevin Weaver, who is bidding to record his 299th career win overall. Despite winning his heat, Weaver and his crew had to repair their car’s right-side door, which was bent from a bout with the cushion. … Billy Moyer Jr. opted to use a Summernationals provisional after his machine sustained nosepiece damage in his final-lap scrape with Rich Bell during the second heat. … Other provisional starters are Jim Moon (Summernationals), Bob Gardner (UMP national points) and Lyle Zanker (track).

Kevin Weaver dominated the action, pulling away from Bobby Pierce to take the win after trading sliders with the youngster on the opening circuit. Tanner English finished alone in third and Rusty Schlenk was fourth, while Rich Bell placed fifth after his last-lap slider on Billy Moyer Jr., who slowed with nosepiece damage. Steve Dimmick attempted to overtake Bell off turn four on the last lap but ran into the back of Bell and got sideways.

Billy Moyer cruised to victory in the first prelim, leading all the way without a challenge. Frank Heckenast finished a half-straightaway behind Moyer in second after overtaking Jason Feger for the position on lap seven. Feger settled for third, with Ryan Unzicker fourth and Timothy Culp passing Steve Thorsten late in the distance to claim the final transfer spot.

Jason Feger of Bloomington, Ill., was the overall quickest qualifier in the group time trials, turning a lap of 13.374 seconds to establish a new track record at Kankakee. He will start from the pole in the first of three 10-lap heat races.

The top five finishers from each of the heat races will transfer to the main event with the heat winners drawing for the top three starting spots in the 40-lapper.

Three drivers will transfer from a consolation race and four provisional starters will be added to fill out the 22-car field.

Thunderstorms are dancing around northern Illinois, but no rain has fallen at the track and skies have actually brightened with the race time approaching. … Defending Summernationals champion Shannon Babb is in the pit area after missing Wednesday night’s opener Brownstown (Ind.) Speedway because his hauler’s transmission failed en route to the track. … Dan Schlieper of Oak Creek, Wis., is a surprise entrant, climbing back behind the wheel for the first time since Florida Speedweeks to drive the No. 8 Pierce Race Car usually campaigned by Bob Cullen of Chilton, Wis. Schlieper plans to compete in the remainder of the weekend’s Hell Tour events at Cedar Lake Speedway in New Richmond, Wis., and Wilmot (Wis.) Speedway. … Billy Moyer Jr. of Batesville, Ark., and his crew members were up until 5 a.m. making a motor change at C.J. Rayburn’s Indiana shop after the powerplant he used to score a fourth-place finish at Brownstown was found to have terminal damage from overheating caused by a hole in his machine’s radiator. He now has two motors left at his disposal — the engines in his pair of cars. … Bob Gardner of East Peoria, Ill., said he’d love to make the overnight trip to Cedar Lake because he’s never run there but has heard so many good things about the track, but with his crew members having day jobs he can’t make the long haul. He plans to be back in Summernationals action on Sunday night at Wilmot. … Jim Shereck of St. Charles, Mo., was planning to compete in an MLRA event tonight at Southern Iowa Speedway in Oskaloosa, Iowa, but the event’s early cancelation due to rain prompted him to change his course to enter Kankakee’s program. … Kevin Weaver of Gibson City, Ill., is making his Summernationals debut after skipping the opener at Brownstown. “That way I don’t have to do ‘em all,” Weaver joked when asked about bypassing Round 1 of the Hell Tour.

The UMP DIRTcar Summernationals continues Thursday night at Kankakee County Speedway, a stalwart track in the Hell Tour’s long history. Tonight’s $5,000-to-win 40-lapper marks the 26th Summernationals event contested at Kankakee, which was part of the inaugural series in 1986.

Billy Moyer of Batesville, Ark., has won nearly one-third of the Summernationals races at Kankakee, claiming a record eight victories at the track. The 57-year-old, who is in tonight’s field, scored his first Hell Tour triumph at the 3/8-mile oval in 1987 and his most recent came last year.

Other past Summernationals winners at Kankakee who are on hand tonight are Bobby Pierce of Oakwood, Ill., Shannon Babb of Moweaqua, Ill., and Mike Spatola of Manhattan, Ill.

Group qualifying will be used to set the heat lineups for the evening’s action, which is scheduled to begin with hot laps at 6:30 p.m. CT.