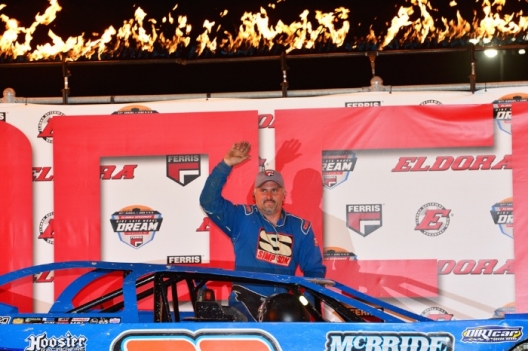 Davenport was nearly unstoppable in racing to his second prelim victory of the weekend. The current Lucas Oil Late Model Dirt Series points leader used a turn-two slidejob to overtake Steve Casebolt of Richmond, Ind., on lap eight and quickly pulled away from the field.

Davenport’s only major obstacle came on lap 12 when he got into the back of a slower car while trying to avoid a tangle between Jared Landers and Wendell Wallace. The contact left Davenport’s machine with slight front-end damage, but it didn’t slow his pace. He cruised through the second half of the race, using the track’s high line to build a lead of 2.620 seconds by the finish.

“This thing was just excellent. It’s just such a pleasure to drive,” Davenport, who scored his fifth straight victory, said of his K&L Rumley Longhorn Chassis. “I was kind of worried when we got in that little wreck. It bent my hood up and I couldn’t turn quite as good getting into the corner. I had to back my corner entry up a little more, but it was still good.”

The race was slowed by two cautions with the first coming for the lap-12 tangle between Landers and Wallace. The second yellow flag appeared when Scott Bloomquist of Mooresburg, Tenn., who was Thursday’s other prelim race winner, slowed from the fifth position.

Erb was just as impressive as Davenport in Friday’s second 25-lap feature, albeit using a different line around the racetrack. He rode the low side of the track from his fourth starting spot to overtake polesitter Tim McCreadie of Watertown, N.Y., on lap 13. Erb never looked back from there, pulling to a lead of 4.656 seconds by the end of the caution-free race.

“The car’s working pretty good,” Erb said of the Black Diamond Chassis he debuted at Eldora this weekend. “I think we made the right choice tonight on tires. Hopefully we can keep working on it and be good tomorrow.”

At the conclusion of Friday’s racing, Davenport assisted in determining the invert number for Saturday’s Dream heat races using Eldora’s new Plinko board. Davenport dropped a chip on the number 3, setting up a three-car inversion for Saturday’s six 15-lap heats.

Tim McCreadie felt much better about his racing fortunes after capturing the first heat. “When it’s like this, this is about when I shine — when you can can maneuver and keep your car in pitch,” McCreadie said of the Eldora track surface. “We struggled last night, but we went to work and this Sweeteners cars is a thousand times better than yesterday.” … Scott James’s homestretch spin after a scrape with Bobby Pierce on lap three of the fourth heat was the only caution flag that flew during the eight preliminaries. He ran into more trouble during the B-Main when he slapped the turn-three wall hard with his car’s right-rear. … Brandon Overton, who finished second in the fourth heat, reported that his father, Bo, who was hospitalized Wednesday night back home in the family’s home state of Georgia, was found to have suffered a mini-stroke. He’s resting comfortably at the hospital and “probably watching the pay-per-view” broadcast in his room, Overton said. … Matt Cochran scratched from the third heat with mechanical trouble.

Outside front-row starter Nick Latham led all the way to capture the 10-lap B-main. Behind him was a wild battle for second among Tim Lance, Riley Hickman, Austin Smith, Chris Simpson and Scott James while Latham controlled the race. Lance ermerged from a late restart for second while Hickman and Simpson got the other transfer spots. Three cautions slowed the action. Polesitter Andrew Reaume spun exiting turn two on the first lap, but somehow the field avoided a pileup. Sixth-starting Tyler Erb got into the wall in turn four on the fifth lap to draw another caution. Scott James shredded a right-rear tire for a lap-nine caution.

Outside front row starter Frank Heckenast Jr. led all eight laps. Kent Robinson charged from the fifth starting spot to run as high as second, but slipped in the final laps to finish third to Matt Westfall. Rusty Schlenk finished fourth, with Eddie Carrier Jr. rounding out the top five.

Polesitter Tim McCreadie jumped to the lead at the drop of the green flag and led all eight laps. Matt Miller charged from his fifth starting spot to finish second, with Mike Marlar advancing one spot to finish third. John Blankenship slipped two spots to finish fourth with Billy Moyer rounding out the top five.

Matt Westfall continued his strong 2015 performance at Eldora in his first season with the Best Performance team, turning the overall fastest lap of the evening with his clocking of 15.374 seconds. “I told (crew chief) Randall (Edwards) before I went out that I was gonna try to be smart and hold it to the wood,” said Westfall, who will bid for his fourth top-five finish in as many feature starts at the half-mile oval this year. “I surprised myself when I saw it (fast time) on the board.” … Josh Richards, who failed to qualify on Thursday after his evening was sidetracked by a slap of the outside wall during his heat race, missed the invert in his heat-race group by one spot. … Sprint car star Tim Shaffer was the fastest qualifier in his heat-race group — and this time he weighed in legally at the scales, not duplicating the DQ he suffered for being light after qualifying on Thursday. … Jerry Bowersock was scheduled to compete in the second group but isn’t on hand because he’s running an open-wheel modified at Limaland Speedway in Lima, Ohio. He plans to return for Saturday night’s Dream finale. … Drivers who didn’t register qualifying laps were Benji Cole, whose car was sidelined by a broken brake line during hot laps, and Jeff Robertson.