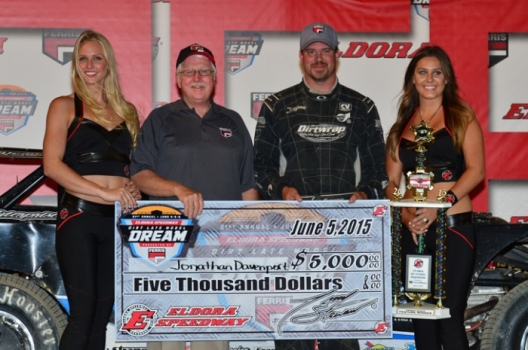 Davenport was nearly unstoppable in racing to his second prelim victory of the weekend. The current Lucas Oil Late Model Dirt Series points leader used a turn-two slidejob to overtake Steve Casebolt of Richmond, Ind., on lap eight and quickly pulled away from the field.

Davenport’s only major obstacle came on lap 12 when he got into the back of a slower car while trying to avoid a tangle between Jared Landers and Wendell Wallace. The contact left Davenport’s machine with slight front-end damage, but it didn’t slow his pace. He cruised through the second half of the race, using the track’s high line to build a lead of 2.620 seconds by the finish.

“This thing was just excellent. It’s just such a pleasure to drive,” Davenport, who scored his fifth straight victory, said of his K&L Rumley Longhorn Chassis. “I was kind of worried when we got in that little wreck. It bent my hood up and I couldn’t turn quite as good getting into the corner. I had to back my corner entry up a little more, but it was still good.”

The race was slowed by two cautions with the first coming for the lap-12 tangle between Landers and Wallace. The second yellow flag appeared when Scott Bloomquist of Mooresburg, Tenn., who was Thursday’s other prelim race winner, slowed from the fifth position.

Erb was just as impressive as Davenport in Friday’s second 25-lap feature, albeit using a different line around the racetrack. He rode the low side of the track from his fourth starting spot to overtake polesitter Tim McCreadie of Watertown, N.Y., on lap 13. Erb never looked back from there, pulling to a lead of 4.656 seconds by the end of the caution-free race.

“The car’s working pretty good,” Erb said of the Black Diamond Chassis he debuted at Eldora this weekend. “I think we made the right choice tonight on tires. Hopefully we can keep working on it and be good tomorrow.”

At the conclusion of Friday’s racing, Davenport assisted in determining the invert number for Saturday’s Dream heat races using Eldora’s new Plinko board. Davenport dropped a chip on the number 3, setting up a three-car inversion for Saturday’s six 15-lap heats.

After winning the first heat, Jeep Van Wormer acknowledged help he’s receiving this weekend from Bruce Nunnally, the owner of Rocket distributor BruceBilt Performance in Knoxville, Tenn. … Steve Casebolt had some mixed emotions after capturing the second heat. “We dug ourselves a big hole last night so I don’t know if we have a just at (a good Saturday heat starting spot) even if we win tonight,” he said. “Those eight laps were pretty fun though.” … Teenager Josh Rice’s spectacular Dream weekend took a turn for the worst when he slapped the turn-two wall hard on the opening lap of the second heat. His crew was scrambling to repair the car’s right-side damage in hopes of making the B-Main lineup. … Jonathan Davenport sounded like a supremely confident driver after overtaking Duane Chamberlain with two laps remaining to win the third heat. “This things is such a pleasure to drive,” he said. “It’s so stuck in the racetrack, I can barely spin a wheel.” … Brandon Kinzer liked the road he took to victory in the fourth heat: “That was kind of old-school Eldora, (racing) around the top.” … Mason Zeigler pulled to the pit area after one lap of the fourth heat. He hit a hole in turn three so hard that it tore the spring steel off his right-side door; the bar then poked into his car’s right-rear tire. … Chase Junghans stopped on the track with two laps remaining in the B-Main due to terminal engine trouble.

Brandon Kinzer emerged from a tight battle with fellow front-row starter Brandon Sheppard and Mason Zeigler on the first lap and completed an eight-lap victory. Sheppard stayed with Kinzer before brushing the wall on the sixth lap in turns one and two, and Jimmy Mars moved up to finish a close third. They transferred to the first prelim feature along with Davey Johnson and James Rice. Zeigler retired on the second lap with apparent right-side damage.

Held up by an early duel for second with Devin Moran, Jonathan Davenport finally broke away, reeled in early leader Duane Chamberlain, and led the final two laps. Davenport pulled away to win by more than 2.3 seconds over Chamberlain while Moran was further back in third after swapping slide jobs with the winner in the early laps. Jared Landers and Jimmy Owens got the other two transfer spots in the caution-free heat.

Outside front-row starter Steve Casebolt grabbed a victory, transferring along with Chad Simpson, Shannon Babb, Billy Moyer Jr. and Shane Clanton. Josh Rice, 16, the group's fastest qualifier, got into the wall on the first lap and never completed a lap.

Outside front-row starter Jeep Van Wormer led all the way for an easy victory in the opening heat. Van Wormer had a half-straight lead on polesitter Jake O'Neil at halfway and never let up. O'Neil held the second spot until the final corner when Scott Bloomquist slid past for a runner-up finish. Behind O'Neil, Darrell Lanigan and Randy Weaver grabbed the other transfer spots in the caution-free prelim.

Scott Bloomquist skipped hot laps because he didn’t want to go out on a still-wet track surface as the first driver in line, but obviously the lack of practice didn’t hamper him. He was the fastest qualifier in the first group (and the second-fastest overall) with a lap of 15.406 seconds and showed some swagger during an interview on stage when he revealed his confidence-level for Saturday’s Dream on a scale of 1-10: “Ten,” he said. … Josh Rice continued his head-turning performance as a 16-year-old Dream rookie, turning the fastest lap in his heat-race group. … Shane Clanton missed the invert in his heat-race group, timing fifth-fastest. He expressed plenty of confidence in the speed of his car in Thursday night’s feature; he said he felt good enough to battle for victory in the second feature but fell to fourth because he “overheated my tires” when he made an early bid for the lead. … Earl Pearson Jr. was the slowest qualifier in his heat-race group after slapping the wall during his time-trial laps. It marked the second straight night that he caught the concrete, but the bodywork damage to his Moring Motorsports car this time wasn’t as severe as when he got into the wall during a heat on Thursday night. … Jason Bodenhamer did not take a qualifying lap. He loaded up his car this afternoon after crashing hard during Thursday night’s program.