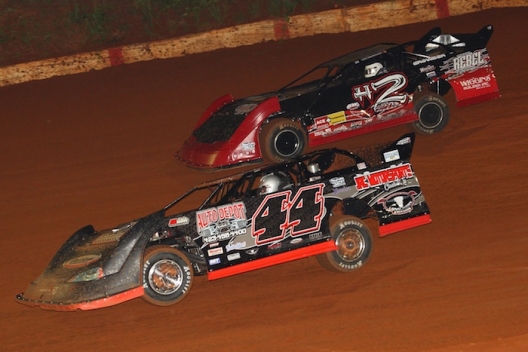 Heath Lawson
Winner John Owenby (44j) battles Matt Henderson (H2) at Tri-County.
What won the race: Taking command from Matt Henderson on the 32nd lap, fourth-starting John Ownbey of Cleveland, Tenn., raced to a $2,000 victory in the Bill Hendren Memorial 40. Henderson led the first 31 circuits from the pole but fell to 11th late with damage after contact from Ownbey.
Quotable: “It’s been 13 years since I’ve been to this track, but this is a new team, and everything just seemed to get better for us as night went on,” Ownbey said. “The car was pretty tight early in the race, but the longer we went, the racetrack came to us and we had what we needed at the end.”
Key notes: Ownbey became the tour's 11th different winner in as many 2015 events. .... Drew Deaver brought out a lap-five caution. ... Nick Lyons and Sylvan Schuette tangled on the 23rd lap; fourth-running Ronnie Johnson pitted under caution with a flat tire. ... Paydon Shook spun on lap 24. ... Johnson went around on the 33rd lap. ... Hometown driver Ray Cook competed at Tri-County for the first time since he began promoting the track; he voluntarily tagged the tail of the feature and finished ninth. ... Kenny Collins won the Super Late Model feature.
On the move: Chase Edge of LaFayette, Ala., started 15th and finished eighth.
Points chase: Entering the race, Johnson had a 66-point advantage over Edge atop the standings.
Car count: 20
Fast qualifier: Matt Henderson
Time: 13.367 seconds
Polesitter: Matt Henderson
Next series race: June 6, 411 Motor Speedway (Seymour, TN) $2,500
Editor's note: Results and race details are unofficial.