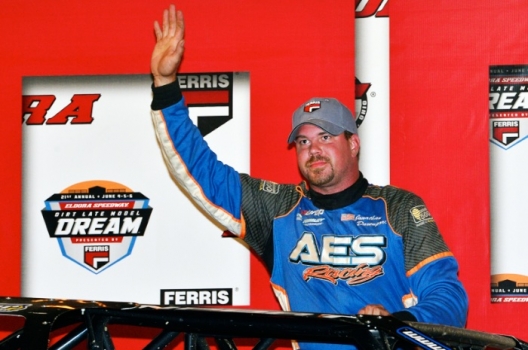 ROSSBURG, Ohio — A Georgia battle royale broke out Thursday at Eldora Speedway — and Jonathan Davenport of Blairsville came out on top.

Davenport mixed it up with Dale McDowell of Chickamauga and Shane Clanton of Zebulon in the early laps, taking command midway through the 25-lapper and racing to a $2,500 payday in the night's second preliminary feature for the Dream XXI presented by Ferris Mowers.

Davenport whipped around McDowell on the backstretch on the 12th lap, then turned back’s McDowell’s late attempts to regain the lead for a victory on the first of three nights of action at the Big E.

“I got to the bottom and I was decent there, but I was just way too tight there and I got to floating the nose a little bit,” Davenport said. “I saw that the outside lane was pretty good so I figured that’s where I needed to be. (Car co-owner and designer) Kevin (Rumley) made a couple last-second shock changes there and it seemed to work pretty good.

“We started getting in traffic there and I guess the bottom got dirtied up a little bit and so did the top and the lapped cars were racing side-by-side. So I just tried to pick the fastest lane of the lapped cars and just stayed there because I couldn’t get by them.

“I couldn’t turn off the cushion like I needed to. We’ve got a little work to do, but it all worked in our favor tonight and we’re going to try to get another tomorrow.”

McDowell settled for second in the caution-free feature while eighth-starting Dennis Erb Jr. of Carpentersville, Ill., rallied for a third-place finish in his new Black Diamond Chassis. Clanton, who had a near-miss with the wall on the seventh lap, ended up fourth while polesitter Jimmy Owens of Newport, Tenn., rounded out the top five finishers.

Davenport’s victory was his fourth in his last four starts over the past two weeks, and McDowell wasn’t able to deny him.

“He could roll around that top good,” said McDowell, who said his car’s handling tightened up. “And when you’re out there leading, you really don’t know where to go. I just held my line and when he drove by me I moved around a little bit. This was the first night on this car … I think we make some adjustments and if the track stays the same we can improve on it.

“There’s an awful lot of good race cars here. The competition is as stiff as ever. We just got to have everything go our way tomorrow ... get in the race first and once we get in the race I think we’ll be alright.”

All but one of the race's 24 starters were running at the finish as outside front-row starter Chad Simpson of Mount Vernon, Iowa, was the only retiree between the two preliminary features.

Thursday’s finishes combined with finishes in Friday’s preliminary features will set the heat race lineups for Saturday’s racing, which culminates with the weekend’s $100-to-win finale.

Dale McDowell’s fourth-heat victory came in a brand-new Warrior car, not the machine that he drove to a $100,000 victory in last year’s Dream. His brother-crew chief, Shane, said they decided to build a new car because the winning ’14 machine “just got numb to changes” so fresh iron seemed to be a logical path. They took the car to Smoky Mountain Speedway in Maryville, Tenn., earlier this week just to take some slow shakedown laps, and Dale said the mount felt good after his preliminary triumph. “I told Shane, ‘It’s like a first date — gotta see how you get along,” Dale said. … Chad Simpson was pleased with his second-heat victory but realized afterward that he must make at least one improvement. “We gotta get our entry because obviously I left too much room for Clanton to get in there under me,” said Simpson, referring to Clanton’s slider attempts late in the distance. … Eight-time 2014 feature winner Randy Weaver was satisfied with his third-place finish in the third heat, but he admitted that he’s still getting adjusted to the high-speed racing at Eldora. “You gotta get used to moving with the wind here,” Weaver said. “The air really has an effect on the car here. My roof never moves — not even at a big place like Virginia Motor (Speedway) — but when I got two or three car lengths away from that 81 car (Jason Riggs) my roof started moving around so much I thought it was gonna blow off.”

Outside front-row starter Tyler Erb edged around polesitter Jay Johnson early and raced to a 10-lap victory. Tim Manville made his way to second by halfway, but he couldn't catch the winning Texan in finishing second, his hands full with seventh-starting Chase Junghans. Shannon Babb came from 11th to get the fourth and final transfer spot over Brandon Overton, who rallied from 15th in the high groove but lost momentum amid traffic.

By virtue of an inversion by qualifying time of heat winners, Jimmy Owens of Newport, Tenn., is unoffiically on the pole for the 25-lap feature with Chad Simpson alongside. Brandon Sheppard and Dale McDowell are on the second row.

Fourth-starting Dale McDowell blew around polesitter Bobby Pierce down the backstretch to lead the third lap and cruised the rest of the way while testing the high and low grooves. Dennis Erb Jr. came up to finish second with Pierce securing the third spot. Further back, outside front-row starter Casey Noonan and fifth-starting Billy Moyer Jr. got the final two transfer spots. Steve Casebolt charged from back in the field to contend midway through the feature, but he didn't complete the race. Dustin Nobbe got hard into the turn-one wall on the first lap and pulled into the backstretch pit entrance.

Jimmy Owens fought under Jason Riggs on the third lap and cruised the rest of the way. Riggs had his hands full the rest of the way with sixth-starting Randy Weaver and Matt Miller, one of the night's quickest qualifiers who was hampered by traffic the first two laps. Weaver and Miller finished for third and fourth with Chris Simpson getting the fifth and final transfer spot. The first start was called back for a jumped start.

Outside front-row starter Chad Simpson led all the way, edging overall fast qualifier Shane Clanton for the eight-lap victory. Simpson led comfortably most of the way before turning back a late challenge from Clanton, who slid in front of the leader exiting turn two on the final lap before Simpson slipped back ahead with a nifty crossover move. Clanton transferred to the main event along with Scott James, John Blankenship and polesitter Mike Marlar.

Brandon Sheppard turned back an early low-side challenge from Jonathan Davenport, then kept him in check up high for an eight-lap victory. Davenport settled for second with the top two far ahead of the field and Sheppard survived a scrape with a lapped car on the seventh lap. Also transferring was third-finishing Devin Moran along with Steve Francis and James Rice. Cody Mahoney scratched after the fan blade broke his water pump in time trials.

Brandon Overton of Appling, Ga., is racing tonight while his father, Bo, is undergoing tests in a Georgia hospital after being admitted due to a fainting episode on Wednesday night. The 25-year-old Overton is hopeful that his father’s health scare isn’t anything serious. “He’s 60 and in good shape,” Overton said of his father. “But he works so hard — like he’s 30 years old — and he gets so stressed out about this racing.” … Former World 100 winner John Blankenship of Williamson, W.Va., has his car — a Rocket machine his father, Don, bought back recently from Mark Dotson of Cameron, Mo., who purchased the elder Blankenship’s entire racing team last December — sitting behind a decidedly smaller trailer than he’s accustomed. While his No. 23 was transported to Eldora by Dotson in Blankenship’s former hauler, Blankenship has a tiny trailer more suitable for go-karts holding his tires and other assorted parts. “I can almost stand up in it,” Blankenship quipped of the trailer, which he has hooked to the rear of his motorhome. … First-time Dream entrant Austin Smith of Cedartown, Ga., is parked alongside fellow Capital Race Cars campaigner Shane Clanton of Zebulon, Ga., a former Dream and World 100 winner. The 18-year-old made his Eldora debut at last year’s World 100, however. … Mike Marlar of Winfield, Tenn., had his trip to Eldora slowed by hauler problems in Ohio. It marked the second straight year that his rig has broken down en route to the Dream. … Dennis Erb Jr. of Carpentersville, Ill., is debuting a new Black Diamond Chassis.

The 84 drivers at Eldora were split into eight group by draw and those groups of 10 or 11 will face off in time trial and heat races … Drivers in the first, third, fifth and seventh groups will compete for starting spots in the first feature. … Drivers in the second, fourth, sixth and eight groups will compete for starting spots in the second feature. … Those heat races will run alternately. … The top five drivers from each heat transfer to the main event. … Each group will run a consolation race with the top four finishers transferring to the final two rows of the main event lineups. … Among rule changes for 2015 is the removal of the LM-30 as a tire choice. Drivers must choose between Hoosier’s UMP DIRTcar-legal LM-20 (softer) and LM-40 (harder). … Drivers entered who didn’t show up for Friday’s action: Walker Arthur, Chris Brown, Ryan Gustin, Dustin Linville, Brad Neat, Ted Nobbe, Josh Walker and Jacob Hawkins. … Also a no-show was Chris Madden of Gray Court, S.C., who has started the past six Dreams, finishing 11th or better each time.