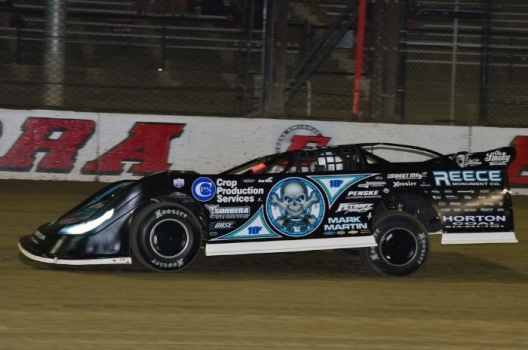 ROSSBURG, Ohio — Polesitter Scott Bloomquist of Mooresburg, Tenn., is clearly ready to continue what he called “World Domination” after his victory in last year’s World 100.

Turning back a challenge from Jeep Van Wormer before the halfway point of the 25-lapper, Bloomquist found his way past traffic and pulled away for an easy caution-free victory, earning $2,500 in Thursday’s first preliminary feature of the Dream XXI presented by Ferris Mowers

“The car’s been really good here,” Bloomquist said. “We always love coming to this racetrack.”

The third-starting Van Wormer of Pinconning, Mich., nearly caught Bloomquist after 10 laps, pulling within a few lengths as Bloomquist’s low-side groove and Van Wormer’s higher groove were both blocked by slower cars.

Bloomquist first ventured high, then Van Wormer dove low, once getting within inches of Bloomquist entering turn one. But that move cost Van Wormer momentum, and when Bloomquist put the low-running Wendell Wallace a lap down on the 15th lap, it was all but over as Van Wormer couldn’t keep up.

Bloomquist built a full straightaway lead while Van Wormer managed to hang on to second in the first of two 25-lap features.

“He was running that bottom line, which was really good, and (we) had our top going really well,” said Van Wormer, who considered skipping Eldora after undergoing recent nose surgery. “I seen it was slowing him up a little bit in that lapped traffic and I was coming to him. The guys were in my lane right there at the end of it and I couldn’t get by them.

“I did tear up the spoiler a little bit. But it’s one of those things. To come out of here with a second place, and the cars in pretty decent shape, so we’re happy as heck with that.”

Bloomquist wasn’t sure what to make of his competition — no one got close enough for him to see a challenger — but he was happy with his Sweet-Bloomquist Race Car.

“Not sure what tires the other guys ran, but I was a little bit soft maybe,” he said. “The car just really works good on the bottom. I really think it works good everywhere, so we’re really looking forward to Saturday.”

Bloomquist would like to excite the crowd with his unprecedented $100,000 Dream victory in Saturday’s 100-lapper.

“It’s exciting no matter what,” Bloomquist, who never hides his love for Eldora. “It’s a great racetrack. I got to thank Tony Stewart for all the improvements he’s doing here. It’s just enjoyable to be here.”

Finishing third was 16-year-old upstart Josh Rice of Verona, Ky., while 11th-starting Jared Landers was fourth. Matt Westfall of Pleasant Hill, Ohio, was fifth as the top home-state finisher in a race where all 24 starters were running at the finish.

Thursday’s finishes combined with finishes in Friday’s preliminary features will set the heat race lineups for Saturday’s racing, which culminates with the weekend’s $100,000-to-win finale.

Eddie Carrier Jr. had a pretty simple answer when asked if his slap of the wall off turn two on the opening lap of the second heat was a result of him getting too high on his own: “Yeah,” he replied as he pounded on the crushed sheet metal along the right side of his car. … Earl Pearson Jr. rode the wall through turn two just three laps after Carrier, knocking his Larry Moring machine out of the second with smashed right-side bodywork. “I think it’s a little slimy up there against the wall,” he said. “I just got sucked in.” … Gregg Satterlee faded badly in the third heat, going from the early lead to a non-transferring sixth-place finish. His crew chief, Robby Allen, reported that a combination of an testy engine and a car that wasn’t working right prompted Satterlee’s fall from grace. … Mason Zeigler said he “got loose” in turns three and four at the start of the first heat and spun. “We just aren’t good right now,” said Zeigler, who also battled an overheating engine. … One of the happiest drivers in the pits after heat action was 16-year-old Josh Rice, who finished second in the second heat after swapping the lead twice with eventual winner Darrell Lanigan. “That was a blast,” said Rice, who made his first-ever Dirt Late Model start at Eldora on May 24. Rice’s 22-year-old brother, James, who also qualified for feature action with a fifth-place finish in his second-group heat, was impressed by his sibling. When asked if he had any advice for his brother, James said, “I was asking him for advice.”

Frank Heckenast Jr. slipped under race-longer leader Wendell Wallace at the white flag for a 10-lap victory. Wallace held on for second just ahead of a charging Andrew Reaume, who rallied to finish third. Mason Zeigler got the final transfer spot over fellow Pennsylvania driver Gregg Satterlee, who couldn't recover from a poor start. Eddie Carrier Jr. rallied from the last row to finish seventh.

By virtue of an inversion by qualifying time of heat winners, Scott Bloomquist of Mooresburg, Tenn., is unofficially on the pole for the 25-lap feature with Davey Johnson alongside. Jeep Van Wormer and Darrell Lanigan are on the second row.

Fourth-starting Scott Bloomquist worked his way to the lead in the low groove, leading the final two laps after Devin Gilpin slipped up and got into the wall in turn two. Gilpin barely held on for second over Don O'Neal while Billy Moyer and Shirley, who fell from contention when he got into the turn-two wall, also transferred. Gilpin's early slide job staked him to an early lead as he edged away from the field before getting too high and losing his moment against the wall, setting up a three-wide battle with Bloomquist and O'Neal for the top spot.

Fourth-starting Jeep Van Wormer (high) and Matt Westfall (low) blew past leader Gregg Satterlee on the third lap, then Van Wormer held Westfall in check the rest of the way for the victory. Van Wormer, racing despite recent surgery to repair a broken nose, transferred with Westfall (who was second by one length), Jared Landers, Jerry Bowersock and Duane Chamberlain.  Three starts were required to get the race going. Westfall grabbed the lead on the initial start, but he was docked two spots for jumping from the third position. On the second attemped start, Mark Voigt was the backstretch victim of a three-wide tussle.

Polesitter Darrell Lanigan regained the lead from sixth-starting Josh Rice on the seventh lap and grabbed an eight-lap victory. Rice zipped underneath Lanigan after a mid-race restart and led a few laps, but Lanigan's outside line carried him back out front. Rice transferred along with Chris Ferguson, Jimmy Mars and Kent Robinson. Outside front-row starter Eddie Carrier Jr. got into the turn-two wall on the first lap, pulling to the pits. Earl Pearson Jr. was running third when he duplicated Carrier's error on the fourth lap and drew a caution when he couldn't limp his car to the pits.

Polesitter Davey Johnson survived mid-race challenges from Rusty Schlenk and Nick Latham for a victory in the first heat. Latham and Schlenk nearly collided on the fourth lap between turns three and four, giving Johnson a little breathing room. He transferred along with Latham, Jason Feger, Schelnk and Tim McCreadie, who edged Frank Heckenast Jr. Josh Richards got into the turn-one wall on the second lap and fell from contention. Mason Zeigler spun by himself between turns three and four, putting him on the tail for the second start.

Earl Pearson Jr. of Jacksonville, Fla., reported that he’s feeling fine six days after he rode out a rough series of flips in a Lucas Oil Series event at Tazewell (Tenn.) Speedway. He said the worst he felt in the aftermath of the accident was two days later, when his lower body was extremely sore. “I’m good to go now,” said Pearson, who will make his first start of the season in the Larry Moring-owned Black Diamond car that he is running in selected specials. … At the age of 16, Josh Rice of Verona, Ky., is making his first crown-jewel start at Eldora just two weeks after running a Dirt Late Model at the track for the first time. … Andrew Reaume of Blenheim, Ontario, is back in crown-jewel action at Eldora after missing both majors last year while sidelined for much of the season by Guillain–Barré syndrome (GBS), a serious disorder that occurs when the body’s immune system mistakenly attacks part of the nervous system. Reaume, who suffered a blown engine during preliminary competition in his last Dream appearance in 2013, entered the track’s May 24 Johnny Appleseed Classic but couldn’t take advantage of a front-row starting spot because his rush to prepare a 40-compound tire got him on the track so late that he was still buckling up his belts as the race rolled toward the green flag. “Needless to say, I was a little messed up at the start,” said Reaume, who reported that he’s managing his GBS affliction well by making sure he doesn’t wear himself out physically. ... Jason Bodenhamer hit the turn-one wall on his first qualifying lap the same time Brian Ligon wrecked in time trials. "You live by the edge, you die by the edge," Ligon said after he tried to get on the high side. His car suffered serious front-end damage, but without a backup car, his crew will try to fix it. ... Sprint car star Tim Shaffer was 33 pounds light after time trials, disqualifying his time trial laps.

The 84 drivers at Eldora were split into eight group by draw and those groups of 10 or 11 will face off in time trial and heat races … Drivers in the first, third, fifth and seventh groups will compete for starting spots in the first feature. … Drivers in the second, fourth, sixth and eight groups will compete for starting spots in the second feature. … Those heat races will run alternately. … The top five drivers from each heat transfer to the main event. … Each group will run a consolation race with the top four finishers transferring to the final two rows of the main event lineups. … Among rule changes for 2015 is the removal of the LM-30 as a tire choice. Drivers must choose between Hoosier’s UMP DIRTcar-legal LM-20 (softer) and LM-40 (harder). … Drivers entered who didn’t show up for Friday’s action: Walker Arthur, Chris Brown, Ryan Gustin, Dustin Linville, Brad Neat, Ted Nobbe, Josh Walker and Jacob Hawkins. … Also a no-show was Chris Madden of Gray Court, S.C., who has started the past six Dreams, finishing 11th or better each time.