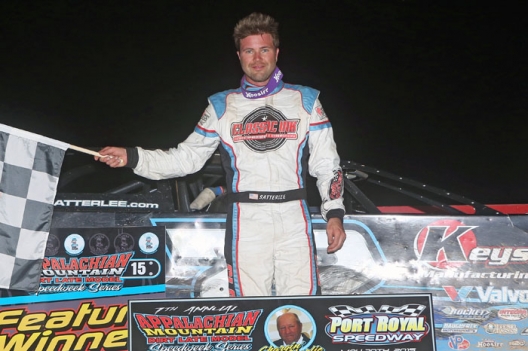 PORT ROYAL, Pa. (May 30) — Practice made perfect for Gregg Satterlee.

One week after making an impressive 18th-to-second run in a regular-show tuneup at Port Royal Speedway, Satterlee returned to the half-mile fairgrounds oval on Saturday night and steered to a $4,000 victory in the 40-lap Charlie Grinestaff Memorial that kicked off the seventh annual Loco-Motives Appalachian Mountain Speedweek.

Satterlee, 30, of Indiana, Pa., had his family-owned Rocket Chassis machine in fine form, winning a heat race and leading all but two laps of the feature off the pole position. He ceded the top spot briefly to Mason Zeigler of Chalk Hill, Pa., on laps 17-18 before charging back in front on the 19th circuit and turning back a late threat from Rick Eckert of York, Pa., to cement his fourth career win on the mini-tour.

“I think we learned a couple of things from racing here last week,” said Satterlee, who tied Eckert, Tim McCreadie of Watertown, N.Y., and Josh Richards of Shinnston, W.Va., for winningest-driver status in the history of the AMS. “But really, we basically were like we were here last year when we had a really good car and ended up blowing a motor (in the AMS headliner). This year we got the job done.”

Eckert, 49, sliced a half-straightaway deficit to Satterlee to just a couple car lengths when the leader was slowed by lapped traffic in the final laps, but the veteran drove his MasterSbilt by Huey car across the finish line 1.100 seconds behind the victor to collect runner-up money.

Third place went to the 22-year-old Zeigler, who was a serious contender for the checkered flag in his first start in the familiar yellow-and-red Rocket No. 43A fielded by Bryan Klinedindst of Manchester, Pa. Sixth-starter Jeff Rine of Danville, Pa., finished fourth after challenging both Eckert and Zeigler for third during the race while ninth-starter Kyle Hardy of Stephens City, Va., grabbed fifth place from Mitch Hack of Mexico, Pa., on lap 30 and finished there in his first-ever start at Port Royal.

Satterlee registered his second career win at Port Royal after spending much of the distance laboring to find the quickest way around the sprawling speedway.

“This seems like one of those racetracks where there’s so many places you can be,” Satterlee said. “It’s really hard to lead here and know where you need to be. If you can follow a car and watch them, you can really learn a lot.

“I was just trying to do what felt best. I was doing that for a little bit and then Zeigler got by me (for the lead) … we were in really heavy lapped traffic and it seemed like every time I picked a line to take, they would go there, and that cost me.

“But then (Zeigler) got kind of caught behind a lapped car and I got a good run off of four,” he added. “He kind of slowed down and I kind of stuffed it in there and slid him into (turn) one to get back by him. It worked out.”

After the race’s lone caution flag flew on lap 26 — for Dylan Yoder of Selinsgrove, Pa., who spun between turns three and four while attempting to overtake Hack for fifth place — Satterlee had the open track he wanted to really spread his wings. He perched his car on the extreme outside of the oval and sailed around it for the remainder of the distance, slowing his pace only during the last couple circuits when lapped traffic came into play one final time.

“A lot of times if the top’s there, I feel more comfortable running that than trying to slow down and go around the inside,” said Satterlee, the 2013 AMS champion. “I was really good up there when I was on my own, but then when we would get in lapped traffic — well, it slowed everybody. It was just like whoever made the right move at the right time would come out ahead, and fortunately we were able to do that.”

Eckert, who won the AMS title in 2010 and plans to enter all the series events this year, appeared to have his chances in the feature but couldn’t close the deal. The race’s outside polesitter had to fight back after opening-lap contact in turn one with Satterlee — contact that Eckert later expressed displeasure with in his post-race comments — dented his car’s door and caused him to lose second to Zeigler. Eckert eventually regained second after the lap-26 restart and ducked underneath Satterlee entering turn one on lap 27, but he wasn’t able to surge ahead and steadily lost ground over the ensuing circuits before mounting an ultimately fruitless last-ditch charge.

“I think I was on the wrong tires,” Eckert said. “I never quite had a car good enough to race with (Satterlee), but when we got in traffic it sort of equaled us out.

“I feel like we made some good changes. I just picked the wrong tires.”

Zeigler also had opportunities to make a triumphant debut in Klinedinst’s machine. He managed to sneak by Satterlee for the lead with an inside move off turn four on lap 17, but he couldn’t stay there and was later effectively done in by the race’s only caution flag.

“I waited and waited and waited, and I finally got a nice pass I thought on Gregg to get the lead,” Zeigler said. “Then he slide-jobbed me there shortly after (on lap 19) and I had to get on the binders and sort of lost him for a second. I thought we had something for him again and was gonna get him back — I reeled him back in — but then that dang caution came out.

“They (Satterlee and Eckert) had different tires on for sure, because I was just a sitting duck on that restart. My tires took like five laps to come back in and I lost a bunch of ground. Once they came back in I was reeling Eckert back in, but we ran out of time.

“For the first night out, though, with these guys, we had a great run,” he added. “I think if I race this a couple more times, we’ll have a really good race car.”

Notes: Mitch Hack settled for a sixth-place finish after starting fourth in the feature and running in the fifth spot for three-quarters of the event. … Rine earned the $150 overall fast-time bonus from Ernie D’s. … Lindsay Barton of Mifflintown, Pa., became the first-ever female driver to qualify for an AMS feature when she finished second in the first B-Main. She was an early retiree from the headliner, finishing 24th. … Port Royal hosted the AMS opener after Friday night’s rainout at Bedford (Pa.) Speedway. Thunderstorms were once again a threat — in fact, Saturday’s racing program at Selinsgrove Speedway, which is just a half-hour away, was canceled by rain late in the afternoon — but only a slight sprinkle that lasted a minute or two around 5 p.m. fell at the track.