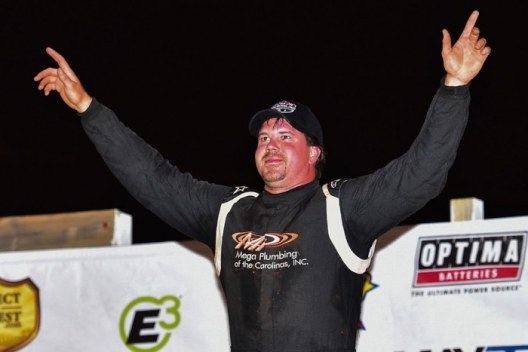 The Blairsville, Ga., driver rallied from his ninth starting spot, taking the lead from polesitter Scott Bloomquist of Mooresburg, Tenn., on the 35th lap and racing to a 50-lap victory on the Lucas Oil Late Model Dirt Series. Davenport earned $10,000 in front of a huge crowd for the Toyota Knoxville 50 at one of the country’s highest-banked dirt tracks.

"That was pretty exciting, wasn't it,” Davenport said in victory as the crowd roared wildly, saluting his come-from-behind victory. "I just love running here. I couldn't wait to get here today, and to top it off, my dad was here to watch us run. He rarely gets to come to the races, so it was great to get the win for Rumleys and my dad.”

Earl Pearson Jr. of Jacksonville, Fla., who entered the racing leading the Lucas Oil Series points, wasn’t around at the finish after a scary rollover accident in the early laps. He was uninjured, but his DNF allowed O’Neal to slip past into the series points lead.

After starting in the fifth row, it took a while for Davenport to get rolling. But he zipped around the outside, picking off competitor after competitor before finally catching Bloomquist with 16 laps remaining.

"That top groove came into it,” Davenport said. “We struggled for several laps to get going. I was below the line I wanted to run several times and finally got up against the wall and the car took off, there was plenty of grip up there.

“A lot of the guys seemed to stick to the bottom and middle and that left the door open for me. I figured we were turning lap times considerably quicker than anybody.”

Bloomquist was cruising out front through the first half of the race, but Davenport reeled him in.

"I don't know where he came from,” Bloomquist said. "I could feel our line going away in the last half of the race, I should have moved up to the top quicker than I did. He was around me before I realized it.”

Bloomquist took the lead at the drop of the green, but the red flag appeared on the fifth lap for Pearson’s scary accident. Pearson running on the inside of a three-wide battle down the backstretch with O’Neal and Stacy Boles. Entering turn three, Pearson and Boles made contact and Pearson’s car veered to the right and began a series of rollovers with Brad Neat sliding into the rear of his upside-down car just as it came to a stop.

When the race resumed, Bloomquist continued to show the way with Francis running in second. O’Neal took the second spot from his teammate later while Davenport began heading for the front, eventually getting to the third spot behind O’Neal.

Bloomquist, O'Neal, and Davenport waged had a tremendous battle for the lead with Davenport taking second just past the halfway mark. Davenport worked on Bloomquist for five laps before finally making the winning pass.