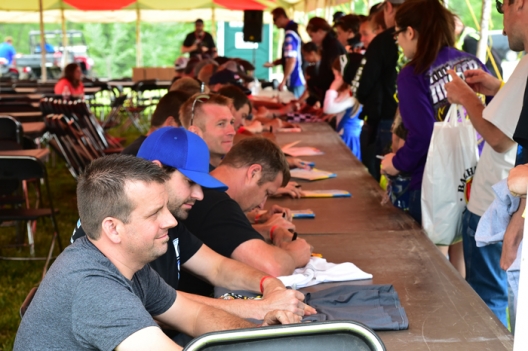 With rain refusing to let up, track and series officials announced just before 10 p.m. CT that the finale of the Show-Me 100 weekend has been postponed to Sunday. Gates will open at 2 p.m. CT and hot laps are scheduled to begin at 4 p.m. CT.

Just as the situation appeared to be improving with packer trucks bringing the track surface around, rain began to fall again at 8:55 p.m. CT. The moderate shower slickened the track significantly, forcing most of the equipment to stop circling the speedway; as of 9:05 p.m. rain was still falling.

With the rain ceased after a significant shower passed through, the track-prep crew began moving onto the speedway surface at 8:35 p.m. CT in hopes of restarting the racing program.

After a caution flag flew on lap 10 of the second B-Main for Cody Holtkamp's spin to the inside of turn four, rain that had begun falling lightly a few circuits earlier intensified enough to force officials to send the field to the pit area. Eddie Carrier Jr. leads Bobby Pierce, Ryan Gustin, Jimmy Mars and Kyle Berck as the program goes into a hiatus for precipitation.

Terry Phillips led the 20-lapper from flag-to-flag, beating Robert Baker to the finish line by 1.321 seconds. Baker came from the eighth starting spot to wrestle second from Jason Utter on lap 14 after the two drivers swapped the spot several times. A caution flag flew on lap nine for a tangle between turns one and two involving J.C. Wyman and Cole Wells, and another was needed on lap 10 when Cliff Morrow stopped on the inside of turn two with nosepiece damage. Three-time Show-Me 100 Jimmy Owens pulled off the track on lap 13 shortly after losing fourth to Randy Roth, forcing him to use a provisional to gain entry to the feature.

With rain threatening the track to the west, officials sent the first B-Main onto the speedway about 20 minutes prior to the scheduled start time of 7:45 p.m. CT to get the program rolling.

Tony Jackson Jr. of Lebanon, Mo., is on the pole position for the feature alongside fellow heat winner and home-state racer Jesse Stovall of Billings, Mo. Other Friday-night heat winners filling the second and third rows are Jonathan Davenport of Blairsville, Ga., Brian Shirley of Chatham, Ill., Devin Moran of Dresden, Ohio, and Billy Moyer of Batesville, Ark.

The top two drivers from each consolation race transfer to the A-Main while provisional starters will be added to the rear of the starting field. The winner of the Non-Qualifiers’ Race will have the option of taking the $2,000 top prize or tagging the rear of the feature field.

Temperatures have risen to around 70 today, but a forecast that includes thunderstorms looms over the evening’s action. Rain appears to be approaching from the west, so track and series officials have rearranged the evening’s schedule to run all Late Model action — B-Mains, Non-Qualifiers’ Race and the Show-Me 100 — before the open-wheel modified events to push the program along as quickly as possible. … The only drivers scheduled to start a B-Main who aren’t on hand are Will Vaught of Crane, Mo., whose Friday-night racing ended due to mechanical trouble in time trials, and Brad Looney of Republic, Mo. … Three heat-race qualifiers are starting their first-ever Show-Me 100: Devin Moran of Dresden, Ohio, Austin Siebert of Grandview, Mo., and Shane Essary of Aurora, Mo., whose second-cousin, Leslie Essary, made Show-Me 100 feature starts in 1993, 1996, 2006 and 2007 at West Plains Motor Speedway. … Scott Bloomquist of Mooresburg, Tenn., will keep his perfect record at the Show-Me 100 intact, starting the feature for the 23rd consecutive year. He has won the event five times, but his best finish since the event moved to Lucas Oil Speedway in 2010 is a runner-up placing in ’11. … Billy Moyer of Batesville, Ark., will make his 19th career Show-Me 100 start. He last won the race in 1996 at West Plains. … Jason Feger of Bloomington, Ill., and his crew put in plenty of work to get their car ready for tonight’s program after Feger was involved in a heat-race crash on Friday night. The incident bent the rearend of Feger’s car (the use of a Port-A-Power and a welder straightened it up) and ripped apart its nosepiece, forcing Feger to put on new fenders and other bodywork pieces. For his efforts Feger will start in the last row of the third B-Main, so he will have to make a huge charge to salvage a struggle-filled weekend. … Steve Francis of Ashland, Ky., was involved in the same accident as Feger and had to pull out his backup car for tonight's competition. He's starting deep in the field for the third B-Main and is looking at using a Lucas Oil Series provisional to start the Show-Me 100. …