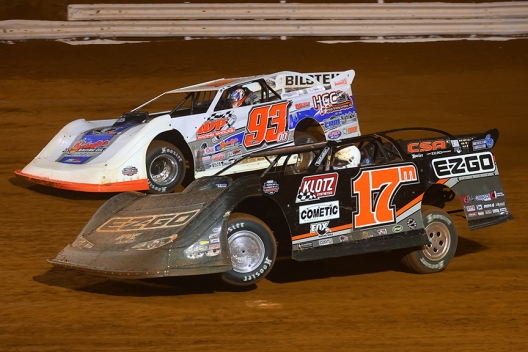 BRASSTOWN, N.C. (Oct. 6) — With a track-record $22,022 on the line as Tri-County Racetrack hosted the Castrol FloRacing Night in America tour for the 17th Tar Heel 53, track promoter Ray Cook and series director Ben Shelton expected a bevy of heavy hitters to descend upon the quarter-mile bullring nestled in the state’s scenic western mountains.

Both were right, but it was the unlikeliest of national stars — Hall of Famer Dale McDowell of Chickamauga, Ga. — who left little Brasstown with the big check.

It wasn’t the nation’s top-ranked driver Jonathan Davenport, the superstar from Blairsville, Ga., who grew up racing at Tri-County. Not Chris Madden, the Gray Court, S.C., star who has had arguably the second-best 2022 season of any driver. Not Evans, Ga.’s Brandon Overton, who won the last two Tar Heels. And not Brandon Sheppard, the four-time World of Outlaws Case Late Model Series driver from New Berlin, Ill., who entered Thursday’s race as the Castrol tour’s point leader.

Instead, it was McDowell, the 56-year-old veteran from Georgia, who started 10th and pedaled his brother’s Shane McDowell Racing machine around Tri-County’s inside line all the way to the front. He took the lead from race-long leader Carson Ferguson of Concord, N.C., down the backstretch on lap 45 and drove away to a 1.505-second victory over Overton, who started fifth.

Sixth-starting Madden ran as high as second before settling for third, while Cla Knight of North Augusta, S.C., picked up 11 spots to finish fourth and polesitter Garrett Alberson of Las Cruces, N.M., completed the top five.

“We had a pretty good long run car as we usually do,” said McDowell. “A couple weeks ago (during a $20,000-to-win World of Outlaws race) at Boyd’s, I was a little easy and let one I feel like get away from us. These things are hard to get, so we managed our tires.

“Shane and Landon, you know, they balanced the car. Shane’s good at adjusting and getting it balanced in all the information that I can feed him. I really didn’t know. It was awfully racy there in lapped traffic, so I kind just chose the bottom there for a little bit and then there late I got to running the middle. Man it’s awesome. Awesome win here.”

Starting outside the front row, Ferguson grabbed the lead on the opening lap from Alberson and paced the field comfortably out front until Sheppard, running second at the time, slowed with a flat tire on lap 38 and then drew a caution on lap 39. McDowell, who had made it to sixth by then, grabbed one position thanks to Sheppard’s exit and another on the restart. He made it three wide as he grabbed second on lap 43 and immediately ran down Ferguson.

As the two raced down the back straightway — McDowell on the inside and Ferguson outside — they touched, with McDowell surging ahead entering turn three to lead lap 45. Ferguson tried to answer, but as he dove to McDowell’s inside entering turn one, he spun to draw the race’s third and final caution. Rather than continue on from the rear, Ferguson parked and was credited with 20th place.

“He’s mad, but I was completely wheel-to-wheel with him and he turned left,” McDowell said. “I didn’t spin him out. We rubbed a little bit getting down into the corner. He needs to watch the video. He’s got a lot to learn, so I think if he goes back and watches the video he’ll understand what went on there.

“I was just holding my line on the bottom. I didn’t wash out up into him … didn’t get into the back of him, just run side-by-side down the straightaway there, the back straightaway there, and he started cutting left trying to cut me off and I just kinda held my ground.”

On the final restart, McDowell left Overton, Madden and a fast-closing Knight to battle for the runner-up spot.  Overton secured it and stayed there the remainder of the distance.

“Congrats to Dale man, he was good,” Overton said. “He could run down there and get in that bottom and get stuck and go the other way. (I was) just too loose. Started the day off wrong, too tight qualifying and got us put back. I don’t know, it is what it is. It was a fun race, run good. We’ll take it and go on.”

Madden was scored in second on laps 41 and 42 and lined up beside Overton on the restart in third, but as he tried to regain the spot, he slid high in turns one and two, coming close to surrendering his podium finish to Knight.

“I wasn’t as good as Dale was. He could stick right in that bottom and leave and exit pretty hard,” Madden said. “We give it one last shot up there and got over the cushion and got hung up. We just give it all we had right there. Great finish for us tonight. We’ve been struggling a little bit here lately. I think we got something we can build on again and keep working hard and see if we can’t get back in victory lane. Awesome race tonight. Had fun. Had a great time. Me and Dale had a heck of a heat race. That was fun you know. That’s racing.”

Notes: McDowell won his second career Tar Heel. He won the Tar Heel 50 in 2009 at Cleveland (Tenn.) Speedway, the only time the event wasn't contested at Tri-County. … This was McDowell's ninth start at Tri-County since 2013. He has one victory, seven top-fives and eight top-10s (worst is a 14th in 2018). … Hometown hero Jonathan Davenport’s first race at Tri-County started well as he set fast time, but went south in a hurry when he made contact with the spinning car of Jensen Ford of Johnson City, Tenn., in the first heat. Davenport, who was awarded a lifetime pass to Tri-County by promoter Ray Cook before the show, climbed as high as sixth before a flat tire dropped him to 16th. … The string of bad luck on the Castrol tour continued for Winfield, Tenn., driver Mike Marlar, who struggled for the second straight series race. Marlar nearly spun in his heat before suffering a pair of left rear flats. Out of series provisionals, Marlar didn’t advance to the feature. … Tyler Millwood of Kingston, Ga., had a hard crash in the third heat and then showed his displeasure by throwing his helmet at fellow Georgian Wil Herrington of Hawkinsville. The two had made contact as they exited turn two. … Drivers scratching for the night after heats: Marlar, Ford, Millwood, Mario Gresham and Clay Coghlan.