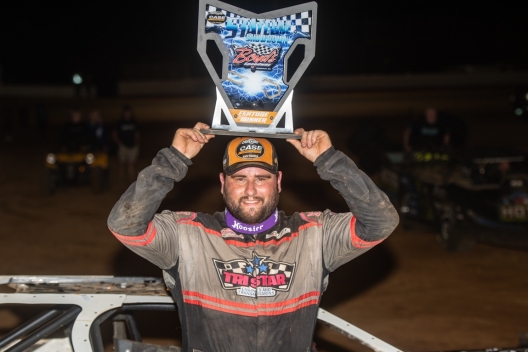 “That guy right there is one of my heroes,” an awestruck Gustin said of the 56-year-old McDowell while receiving his $20,000 first-place check. “I’ve watched him since I was a little kid, so to be able to outduel him feels pretty damn good.”

Gustin executed a successful slider on McDowell rounding turns one and two on the final tour and maintained command the rest of the way, beating McDowell to the checkered flag by 0.660 of a second for his second career WoO triumph. The second-year tour regular’s first win came May 28 at Sharon Speedway in Hartford, Ohio, in another event that offered a $20,000 top prize.

Kyle Bronson of Brandon, Fla., finished third for his third podium result of 2022 in WoO competition. Chris Madden of Gray Court, S.C., started and finished fourth and outside polesitter Dennis Erb Jr. of Carpentersville, Ill., placed fifth to extend his lead in the WoO standings to 98 points over Tanner English of Benton, Ky., who finished eighth.

Gustin, who started fifth in his Tri-Star Transmission-backed Rocket car, appeared destined to finish second after grabbing the position on lap 21. McDowell, who took the lead from Bronson on lap four, effectively dominated most of the distance.

But a caution flag with 13 laps remaining set the stage for an epic. McDowell initially drove away from Gustin on the restart, but Gustin rallied by turning up the wick around the outside of the 3/8-mile oval.

“He was a lot better down on the racetrack than we were, so I knew it was just time to get up on the wheel and do what we could do,” Gustin said.

The top-running Gustin came off turn four heading toward the white flag right on the rear bumper of McDowell’s Team Zero machine. He then dived to the bottom of turn one, slid in front of McDowell between the corners and stayed ahead for the remainder of the final circuit.

“I just kind of felt like I was creeping, creeping, and creeping up on (McDowell),” Gustin said. “We got a good run out of (four with the white flag flying), and I just hope I didn’t make too much contact (with McDowell). I have to watch the video. That’s the last person I want to ever rough up.”

“(McDowell) was one of my heroes growing up, and he still is,” he added. “To be able to outrun him down here, it definitely means a lot. It feels really, really good, man. Like I said, anytime you can beat Dale McDowell, he’s a legend. That’s all there is to it. Legendary, for sure.”

McDowell fell short after leading 46 laps of his home state track’s richest event ever. He said he was better on longer runs and needed to stay in the middle to help manage his tires.

“He’s a good kid and he races hard, and I knew he was gonna race that top,” McDowell said of Gustin. “I’d run the whole race kind of in the middle of the racetrack so it was just bad timing for us. Shane (McDowell’s car owner and brother) told me — I had hand signals — and he told me (Gustin) was right there, but on a long run I think he would hurt his tire, his left-rear tire, and I could actually get away a little bit. But those cautions kinda helped freshen his stuff up and he just got up there and drove the wheels off it.

“I stayed in the middle. It was really my fault. But it was a good race … we led most of it. We gave everything we had.”

Bronson, who led laps 1-3 off the pole, settled for a third-place finish after running fifth as late as lap 34. He took advantage of the final restart to work his way to the final podium spot.

“I felt like I had a good car there and I just overheated my left rear tire,” Bronson said. “When we had that caution (on lap 37) it let it cool back off and I got back going again there.

“We had a pretty good car both days here, with a brand-new car here, and we’re just tweaking on it. The guys have been working hard. We’re starting to get a little mojo here.”