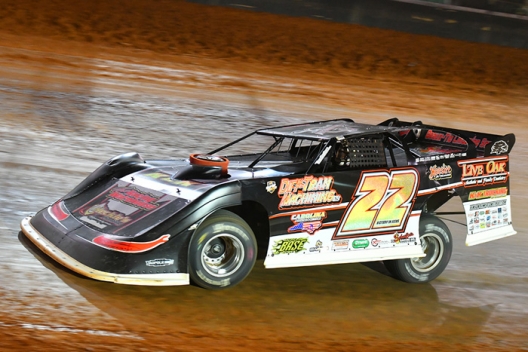 Earning the long-awaited first $50,000 victory of his career, the 32-year-old driver from Mount Holly, N.C., overtook Ricky Weiss of Headingley, Manitoba, for the lead on lap eight and controlled the remainder of the distance to capture the 50-lap Karl Kustoms Bristol Dirt Nationals feature.

Ferguson turned back a late-race challenge from Scott Bloomquist of Mooresburg, Tenn., before pulling away to beat his chassis builder by 2.230 seconds for a milestone achievement that left him walking on air.

“This is the biggest one I’ve ever got and I just can’t believe I’m in this moment,” Ferguson said in victory lane. “God’s blessed me so many times and he gave me a good one tonight.”

Weiss, who started from the pole and led the race’s first seven laps, settled for a third-place finish. Jonathan Davenport of Blairsville, Ga., was fourth for the second consecutive night — though this time he started ninth rather than 21st — and Ricky Thornton Jr. of Chandler, Ariz., started and finished fifth in the finale as the first of two XR Super Series weekend doubleheaders came to a close at the dirt-covered half-mile oval.

A $10,000 winner in the preliminary feature of last year’s inaugural Bristol Dirt Nationals, Ferguson bounced back from his early retirement in Friday’s 50-lapper with a virtually flawless run. He started from the outside pole and was in perfect position on lap eight when Weiss reached lapped traffic.

When Earl Pearson Jr. of Jacksonville, Fla., slowed to pull off the track, Weiss had to check up to avoid hitting the veteran driver’s Jason Papich-owned car. Ferguson jumped on the stumble to charge underneath Weiss off turn four and seize command for good.

“The lapped cars kind of got squirrely off of four and he caught ‘em in the center,” Ferguson said of Weiss. “He didn’t catch ‘em on exit, which always … it’s so hard to tell too, because his spotter guy is probably showing him that I’m right behind him, and usually when that happens you’re not quite thinking as much ahead, you’re thinking about now.

“And when he got to (Pearson), he caught ‘em in the worst spot you could possibly catch ‘em. He had to let off off of four, where I could see what was happening, I could see it develop, and I could actually stay in the gas and then take my point. I actually cracked (the throttle) a little bit, but it was just enough to where I still had plenty of speed to pass him.

“It does suck being the leader in that scenario,” he added. “He had a really good car, but tonight it just worked out for me.”

Ferguson’s previous career-high victory check was $12,000, earned on July 19, 2020, when he topped a Lucas Oil Late Model Dirt Series A-main at Lucas Oil Speedway in Wheatland, Mo. He’s been knocking on the door in major events for several seasons but hadn’t been able to break through.

There was one moment where Ferguson saw his dream of adding a $50,000 score to his resume — on lap 35 when he slipped high in turn two while working lapped traffic, allowing Bloomquist to look underneath him. But Ferguson disposed of the lapped car through turns three and four and drove away from Bloomquist over the remaining circuits.

“I knew anytime Scott’s behind us we gotta be up on our A-game,” Ferguson said before giving the 58-year-old Bloomquist a shout-out: “I just want to give a special thanks to Scott. This winter me and Scott spent a couple weekends together working on the race cars. These Team Zero race cars are awesome.”

Bloomquist, who started fourth, capped his first weekend of action 2022 with a $25,000 runner-up finish that represented his richest outing since a November 2019 victory worth $15,000 at Cochran (Ga.) Motor Speedway. He slipped past Weiss for second on a lap-21 restart and maintained the position to the finish.

“I was just watching what was going on ahead of me and just trying to see what kind of pace was gonna be set,” Bloomquist said. “I moved around on the racetrack a little bit until late. Then up high it was still pretty fast in three and four, but in one and two every time I moved up I was loose so we just stuck on the bottom.

“We got a couple of good starts with Ricky there. I hung with Fergy pretty good for awhile, but he had a little harder tire I think and he could punish his a little more so we had to be sure not to overdo it.”

Weiss, 33, saw his hopes for the big prize evaporate on lap eight but accepted the fact that he had been a victim of circumstance.

“Once I got out front there I was just trying to set a decent pace,” said Weiss, who finished second in last year’s World of Outlaws Case Late Model Series finale at Bristol. “I didn’t want to burn my stuff up too early. It was good, but we ended up catching lapped cars there and I didn’t see Earl shut down so I kind of stepped on the brakes there and Fergy ended up getting by me.

“But his car was real good when I followed him there and watched him up front.

Three caution flags slowed the race, all for single-car incidents. Tim McCreadie of Watertown, N.Y., backed into the wall between turns three and four while running fifth on lap 10; Jimmy Owens of Newport, Tenn., hit the concrete in nearly the same spot on lap 21 while holding third place; and Garrett Smith of Eatonton, Ga., smacked the turn-two wall on lap 24.

Notes: Ferguson earned his first victory since March 19, 2021, when he won the Bristol Dirt Nationals preliminary feature. … Chris Madden, who won Friday's $50,000 top prize, was never a factor to go back-to-back as he started 14th and finished 12th. ... Brandon Overton saw his night take a turn for the worst early in his heat race when contact in turn four with Shane Clanton as he ran second flattened his left-front tire. He used a provisional to start 24th in the feature and finished a quiet 15th. … Johnny Scott slammed hard into the outside wall between turns three and four with the right side of his car due to a blown right-front tire as he ran second in B-main 2. He gingerly climbed from the cockpit but was shaken up and visited the infield care center, where he had a sore foot bandaged and iced; his twin brother, Stormy, helped take him back to his trailer. … Stacey Boles turned the fastest lap in the second qualifying group but failed to qualify after slapping the wall during his heat race. He used a fast-time provisional to start the feature. … The shifter in Christian Hanger’s car broke as he pulled onto the track for his heat and he wasn’t able to recover to transfer through a B-main. … The Super Late Models return to Bristol April 1-2 to conclude the Bristol Dirt Nationals with two more $50,000-to-win programs.