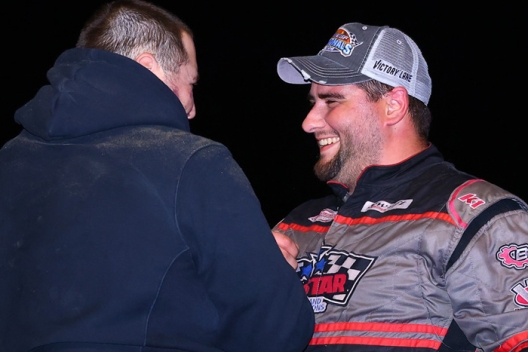 BARBERVILLE, Fla. — Ryan Gustin had a few highs and plenty of lows last season in his first national touring campaign that saw him finish second in the rookie chase on the World of Outlaws Case Late Model Series. But Gustin didn't have a victory.

The 31-year-old driver from Marshalltown, Iowa, made sure to check off that box quickly in 2022 in scoring a $7,000 upset in the second round of the 51st annual DIRTcar Nationals at Volusia Speedway Park.

Gustin's DIRTcar victory — World of Outlaws competition at Volusia starts Wednesday — came at 2:10 a.m. after mid-program rain delays and ambitious, three-division program pushed racing into the wee hours, but he was no less joyful.

"This one's for the whole Ramirez family," Gustin said after fighting off late challenges from eighth-starting Devin Moran of Dresden, Ohio, who pulled within two-tenths of a second but finished 0.532 of a second behind at the checkers.

Tanner English of Benton, Ky., improved eight positions in finishing third behind the wheel of fellow western Kentucky Dylan Thompson's No. 99 while Ashton Winger of Hampton, Ga., and Tim McCreadie of Watertown, N.Y., who held the second spot from laps 16-24, rounded out the top five.

While Sheppard took command from outside the front row, Gustin started with a flurry in grabbing the second spot on the first lap, giving chase to the Rocket Chassis house car driver until the race's first slowdown on lap 14. On the restart, Gustin started on the outside of the Delaware double-file restart and moved in to challenge Sheppard, diving into turn three and taking command when Sheppard got too high in turn four.

"I figured that was going to be my chance to turn left there," Gustin said. "We hit them holes just perfect and got a good (restart). I mean, once you get a run in these cars, you better take advantage of it, because you don't know when you're going to get another one — especially with Brandon Sheppard. We sailed it off in there and made it work."

From then on, despite knowing that McCreadie and Moran were among the talented drivers hot on his heels, Gustin stayed focused.

"There's no room for error," he said. "I had blinders on and I was looking for the checkered flag."

Moran drew close in the final five laps but couldn't find a way past.

"He just did a good job. I wanted him to make a bigger mistake than what he did, but congrats to them guys. I know it's a big win for them. I'm glad for them," Moran said. "I feel like our car's really, really good and we just got to keep working on it. I can't quite finish the corner, so we've just got some things we got to work on and go to the drawing board and see what we can do. But once the track gets like that, it's really good for us."

English slipped back a few spots from his sixth-row starting spot, but he got rolling after the midway caution to get up to seventh, then picked up three spots on the 25th lap and got to third a lap later.

"You know, the restarts helped out a bunch for me (just to) bunch everybody back up. I knew I had a good car, but I just had to get close to 'em so I could pass 'em," English said. "We were just rolling around the bottom there, you know ... I didn't see anybody else as low as I was, so I was pretty happy with the car."

English was in his usual seat — he put his personal seat in Thompson's car — but wasn't all too unfamiliar with the ride.

"It's basically the same car, basically same shocks. Everything's pretty close. You know? (The) motors are pretty close, so I'm pretty happy with it," he said. "I was debating on whether or not to put my seat in it or not. I was just gonna run his seat, but I'm glad I did. This place is fast and then you've got to be comfortable here. We'll pull this (seat) out and put it in mine and then let her go tomorrow."

The 30-lapper was slowed by a pair of cautions, none for serious incidents. Fast qualifier Brandon Overton slowed and pulled to the infield pits on lap 14 and Mark Whitener spun in turn two on the 25th lap.

With a quick turnaround after completing the late-night program, drivers return to action Wednesday with a $10,000-to-win World of Outlaws Case Late Model Series program highlighting the program. Wednesday's racing includes a makeup of a $10,000-to-win WoO event postponed from Jan. 22's Sunshine Nationals with Georgia drivers Ashton Winger and Dale McDowell scheduled to start on the front row.

Notes: Gustin's previous Super Late Model victory came Oct. 9, 2020, in Lucas Oil Midwest LateModel Racing Association competition at Lucas Oil Speedway in Wheatland, Mo. ... In four previous Georgia-Florida Speedweeks starts, Gustin hadn't finished better than 13th. ... Earl Pearson Jr. ran in the top five the first half of the race but faded because the team miscalculated on setup and tire choice. ... Kyle Strickler retired during the mid-race caution with a broken driveshaft. ... Consolation winner Shane Clanton found an engine problem after prelims and was the first retiree in the main event; he plans to replace the powerplant before Wednesday's action. ... The night's 55-car field represented 24 states.

Rain began to fall at 8:15 p.m. during the fourth and final wingless sprint car heat, red-flagging the action. Several quick bursts followed over the next hour, but the rogue showers finally let up and racing restarted around 10 p.m. with an amended schedule starting with two big-block modified heats; the fourth wingless sprint car heat; the third and fourth big-block heats; and then the wingless sprint car B-mains and 30-lap feature so the division could finish first since many entrants will move on to compete in USAC events starting Wednesday at Bubba Raceway Park in Ocala, Fla. Officials announced the six Late Model heats will be run after the wingless sprint car feature with the balance of the show (big-block and Late Model consolations and features) to follow time permitting.

Overcast skies with a high temperature in the upper 60s prevail for the second night of DIRTcar Nationals action headlined by another $7,000-to-win DIRTcar-sanctioned feature. … Tuesday’s car count has swelled to 55 entries. … Drivers joining the roster for Night 2 include Tim McCreadie, Josh Richards, Earl Pearson Jr., Tyler Erb, Cade Dillard, Chase Junghans, Gordy Gundaker, Mike Benedum, Ross Robinson, Garrett Mosley and Jacob Ulrich. … Salem W.Va.’s Benedum arrived at Volusia after spending four days stuck with his disabled hauler at a Peterbilt dealership in Ringgold, Ga. A turbo actuator broke on his toterhome as he was en route from Scott Bloomquist’s shop in Mooresburg, Tenn. — where he spent more than a week preparing his Team Zero car — to East Bay Raceway Park in Gibsonton, Fla., for the final two nights of the Winternationals. It took until Monday for Benedum to get the new part on the truck so he could complete his trip to Florida. … Tyler Erb of New Waverly, Texas, is ready for his first DIRTcar Nationals start of the week after arriving at Volusia earlier today. His Best Performance Motorsports team traveled to his friend and sponsor Steven Roberts’s shop in Georgia — about 20 minutes from Golden Isles Speedway — to wash and prep their equipment. … Shane Clanton of Zebulon, Ga., finished eighth in Monday’s feature despite ending up with a face and lap full of mud. Mike Marlar of Winfield, Tenn., clipped the inside wall between turns one and two in front of Clanton about midway through the race and tossed wet clods high into the air — and right into Clanton’s cockpit. … Brian Shirley of Chatham, Ill., is hoping for a more productive night after a broken cam during Monday’s hot laps forced him to scratch from further action.