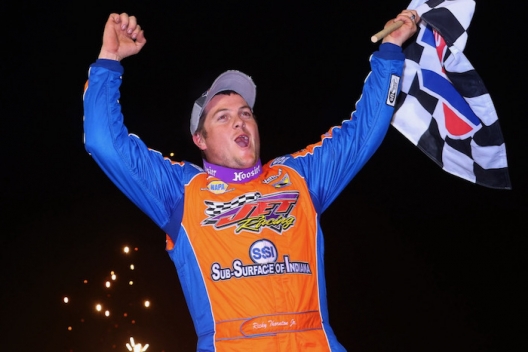 BARBERVILLE, Fla. — Children typically are taught to listen to their parents. But for Ricky Thornton Jr. on Monday night at Volusia Speedway Park, it went both ways as he took a little instruction from young son Asher.

"My little boy told me to go get my Gator," Thornton said, "so we went and got it."

In a dominating performance where the Chandler, Ariz., driver stretched his lead to as much as five seconds, Thornton led all 30 laps of Volusia's 51st annual DIRTcar Nationals Super Late Model opener for a $7,000 payday in a caution-free affair at the D-shaped half-mile.

Thornton's fifth top-five finish at Georgia-Florida Speedweeks marked his first victory during the winter racing action for his Indiana-based SSI Motorsports team. He also picked up his first-ever Gator trophy for a Late Model victory at Volusia.

"We've had really good Speedweeks," Thornton said. "We've had good speed, just the driver keeps throwing away there at the end, so it's nice to get one done."

Eighth-starting Chris Madden of Gray Court, S.C., gained ground on Thornton in the final laps, but the leader's advantage was too much as Madden took the checkers 3.576 seconds behind. Sixth-starting Devin Moran of Dresden, Ohio, was third followed by pole-starting Brandon Overton of Evans, Ga., who held the second spot for 24 laps. Dale McDowell of Chickamauga, Ga., a winner at last month's Volusia Sunshine Nationals, rounded out the top five on the first of six nights of action to wrap up Speedweeks.

Thornton's victory never appeared in doubt until he slipped up a bit in turns one and two with about five laps remaining, but he quickly recovered and kept rolling.

"I kinda got to those traffic there and I just didn't know how hard I need to keep going or not," Thornton said. "I got to (the slower car of Ashton) Winger and I lost the nose couple of times. The top started slowing down a little bit there in (turns) one and two, but we got it done."

Madden didn't mind that the race didn't have a slowdown, but he wished he'd have started a little closer to the front-row starter.

"We definitely didn't need a caution. We just, we needed to start closer to the front," Madden said. "You know, I don't know what it is about my program, but cautions hurt me worse than they help me. We've got to good package that runs (well for) long-distance races.

"We were really good and started coming on (near) halfway. But overall we had a great race car. Great racetrack, tonight. It had some character to it in spots and just patchy here and there, so it was a lot of fun and great racing."

Moran didn't break into the top-five for good until the second half of the race as he failed to duplicate Thornton's streaking high-groove line.

"I really didn't think we'd be able to run around that top like that, you know? Ricky did a really good job," Moran said. "I think he was pretty much out there almost the whole time. And when I tried out to get up there, I just couldn't make no speed, so I just I fell in line behind Chris and we just kind of weaseled our way up through there."

Seventeen drivers completed 30 laps and 22 of 24 starters were running at the finish.

Monday’s DIRTcar Nationals opener — topped by a 30-lap, $7,000-to-win DIRTcar-sanctioned feature — will hit the track after a sunny but cool afternoon during which the high temperature only reached about 60 degrees. … All eyes will be on the Volusia Speedway Park racing surface, which was new for last month’s WoO-sanctioned Sunshine Nationals and proved problematic as it remained extremely moist and became extremely rough. World Racing Group officials struggled with the surface during last week’s UMP modified and 410 sprint car action, but conditions seemed to improve for Friday and Saturday events after the track crew scraped off some of the new clay and afternoon action on Saturday helped dry the surface. … A 47-car field is signed in for Monday’s program. … Several drivers have their cars in the pit area but are sitting out Monday’s competition, including Tim McCreadie, Josh Richards, Chase Junghans, Earl Pearson Jr. and Gordy Gundaker. … Dale McDowell of Chickamauga, Ga., who last month’s WoO season opener at Volusia, is one of several drivers making their first Speedweeks start since the Sunshine Nationals. Others include Logan Martin, Brent Larson, Morgan Bagley and Chris Simpson. … Three-time Speedweeks winner Devin Moran of Dresden, Ohio, was the last Late Model hauler to enter the pits, pulling in to unload for Monday’s racing less than a half-hour before the drivers’ meeting. … Nick Hoffman of Mooresville, N.C., who won Saturday’s UMP modified finale at Volusia, is driving the Hatcher No. 6 Late Model. … WoO rookie candidate Tanner English of Benton, Ky., has his Riggs Motorsports No. 81E locked in its trailer, but he’s entered Monday’s program behind the wheel of the No. 99 normally piloted by Dylan Thompson of Paducah, Ky. English will likely drive the car again on Tuesday before returning to his Riggs Motorsports ride for the four nights of WoO competition; Thompson is expected to drive his own car in the WoO shows. … Mike Marlar of Winfield, Tenn., is back in Speedweeks action with his Ronnie Delk-owned car. He sat out last week’s Lucas Oil Series Winternationals at East Bay Raceway Park in Gibsonton, Fla., after running the first couple weeks of Speedweeks in a car owned by Iowa’s Jason Rauen. … Monday’s program also includes the debut of the Xtreme Outlaw Sprints, a series for wingless sprint cars that runs for $5,000-to-win Monday and $10,000-to-win Tuesday.