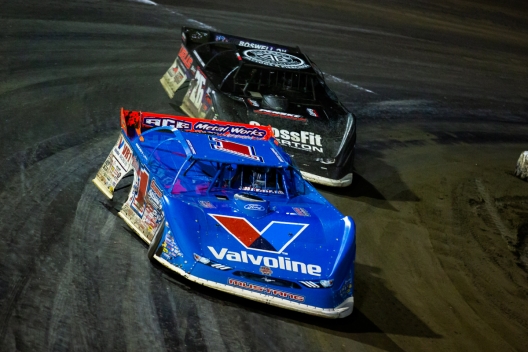 GIBSONTON, Fla. — Losing the lead on lap 11 and briefly dropping back to fourth, pole-starting Brandon Sheppard of New Berlin, Ill., rallied back to the front on lap 24 and became the third three-in-a-row winner in the history of East Bay Raceway Park’s Wrisco Winternationals.

Sheppard earned $12,000 in a Lucas Oil Late Model Dirt Series race featuring five lead changes as he took the checkers 1.142 seconds ahead of Evans, Ga.'s Brandon Overton, who has led all four of the week’s features without a victory.

"It just worked out for us. It was awesome race," Sheppard said. "I can't thank them guys enough for racing me clean, you know Brandon (Overton), Chase (Junghans) and (Ashton) Winger there, and just all these guys out here do a phenomenal job and they're really tough competition."

Overton was fortunate to finish second after suffering right-side damage in making a last-lap, high-groove charge that saw him caught up in a mess that included two slower cars. He managed to hold off Ashton Winger of Hampton, Ga., while Devin Moran of Dresden Ohio, who spun to draw the first of seven cautions on the 30th lap rallied to finish fourth. Reigning series champion Tim McCreadie of Watertown, N.Y., rounded out the top five.

Sheppard led the first 10 laps in the low groove before third-starting Chase Junghans of Manhattan, Kan., moved up to twice swap the lead with Sheppard. But after leading laps 14-21, Overton slipped past to lead two circuits and Sheppard went back ahead one lap before the halfway point in the 50-lapper.

"Man, our car was really good in the bottom there at the beginning of the race and I went up to the top one time and that hole up there coming out of (turn) four is so big, and I was hoping (the fast groove) was going staying in the bottom, because it was going to be treacherous having to run up there the whole time," Sheppard said. "But Chase did a really good job and got by me there and and made me in Overton get up on the wheel and and that was a heckuva race. Overton got by me, too, and luckily, the cards fell my way in lapped traffic there and I was able to get back by him before the caution come out."

Sheppard kept Overton in check in the second half of the race, but Overton ventured into the high groove amid traffic at the white flag, making up ground — but finding trouble. Fellow Georgian Garrett Smith got into the turn-two wall and collected Spencer Hughes, giving Overton no time to avoid the spinning car of Hughes.

"I think Spencer had nowhere to go. (Garrett Smith) was stuffed into the fence. That was my only shot. Brandon wasn't moving off that bottom, and he got kind of hung out with some lapped cars," Overton said. "I went to the outside and, hell, once I had clear vision, they were up there parked. It is what it is.

"Congrats to Brandon. You know, he's done a really good job this week. That's tough man, to lead. It's so tricky getting into (turn) one, but I'm just excited I got to race with him tonight. You know you know every other night we started up front and went straight backwards, so we've got something to work with."

The third-finishing Winger started fourth but ran outside the top five until the 30th lap.

"I just I can't really figure out how to go the first five to 10 laps like I need to, and I kind of get mired back there and sixth or seventh," he said. "I just kind of kind of claw my way back and then, like, you drive by some really good cars, and you look up and Brandon Sheppard and Brandon Overton are in front of you still. It's almost breathtaking, honestly. It's cool to be racing with such great guys ...

"We're just gonna keep plugging away man. It's one of them deals where until it comes, man, it just really sucks running second or third, but it's better than like how last night ended up. I had a really good car and I buried us. Hopefully we can end this week on a strong note tomorrow."

Moran was glad to salvage a top-five finish in maneuvering in the high groove after restarting 25th with 20 laps remaining.

"I knew it was gonna be hard to pass (competitors) putting around the bottom and I just wanted to commit myself to the top. I really haven't been able to run the top that great since I've been here, and tonight, I just made myself do it. And the car was good enough that we could maneuver a little bit and get by them guys," said Moran, a two-time Lucas Oil winner in 2022. "We've still got to work out it, obviously. (Sheppard has) got it figured out right now. And there's some stuff I felt like we learned tonight that we need to go a little further with, but all in all, to come from the tail twice to finish fourth. We had to beat the crap out of our car to do it, but the boys have been working really hard. We'll get back there and get it fixed and go again tomorrow."

All but one of the race's seven cautions came between laps 30-37, three on lap 36 alone.

The first yellow dropped on the 30th lap for the fourth-running Moran's spin. He'd made contact with Frank Heckenast Jr., who was slowing on the backstretch to pull into the infield, then also was sideswiped by an onrushing Garrett Smith.

The second slowdown came on lap 34 when Max Blair got into the fence and the third on lap 36 for a slowing Johnny Scott. Another quick yellow appeared on the lap-36 restart when Tyler Bruening went around between turns one and two, the result of bumper tag among several drivers ahead of him.

The third and final lap-36 caution appeared for a slowing Josh Rice, who headed to the pits (Jimmy Owens pulled into the pits simultaneously with serious right-front damage). Another yellow appeared on the 37th lap for eighth-running Daulton Wilson's spin.

The final caution that appeared after the white flag dropped was for the Smith-Hughes incident that damaged Overton's car.

The Wrisco Winternationals wrap up Saturday at East Bay with a 50-lap feature paying $15,000-to-win.

Notes: Sheppard's three-in-a-row feat at East Bay came over a 48-hour stretch while Richards won three in a row in 2009 over barely 24 hours (two of his victories came in a day-night doubleheader). Don O'Neal was the first Winternationals driver to win three in a row and it too him 360 days as his first came in the 2000 finale and he captured the first two 2001 events. ... Seventeen of 30 starters completed 50 laps. ... An apparent medical emergency in the grandstands briefly delayed the beginning of the main event. ... The most serious incident in prelims came in the second heat when Josh Putnam spun and collected and onrushing Chad McClellan; neither driver was injured. Shane Clanton also got a piece of Putnam's car and retired from the heat. ... Frank Heckenast Jr. of Frankfort, Ill., rallied from his sixth starting spot to win the third and final consolation. ... Brian Shirley was running second in that final consy when he got into the turn-two wall, costing him a transfer spot to the feature. ... Tyler Erb was the apparent runner-up in that third consy but failed to report to the scales after the race and gave up the transfer spot to Tanner English; Erb took a provisional starting spot.

The Tampa-area weather just keeps getting better with Friday bringing brilliant sunny skies and a high temperature pushing 80. … Friday’s program has 74 entries. … Making his first start of the week is Josh Richards of Shinnston, W.Va., who didn’t join his car owner and teammate Boom Briggs of Bear Lake, Pa., in Thursday’s action because he was still reeling from the overnight fire that destroyed his camper in a Wal-Mart parking lot about 30 minutes north of the track. … Richards’s father, Mark, remarked that watching his Rocket Chassis house car driver Brandon Sheppard of New Berlin, Ill., race the outside lane to victory in Thursday’s 40-lap feature reminded him of the track’s glory days. “It was a little like old East Bay,” Mark said. “Not quite there yet, but it had that characteristic to it where you could run the bottom or the top.” … With Illinois drivers Sheppard and Dennis Erb Jr. capturing the first three A-mains of the week, the possibility of Winternationals history being made remains in play. Never since the event grew to six events in 2000 has the list of winners been represented by fewer than three states. … Only one time in Winternationals history with at least four races were there just two states represented among winners: 1993, when the victors were from Florida (Keith Nosbisch twice and Ken Nosbisch once) and Kentucky (Steve Francis won twin All-Star Circuit of Champions features over two nights).