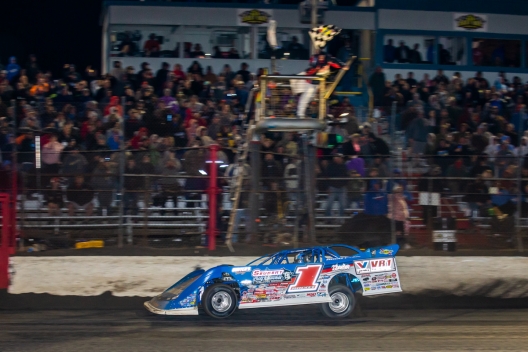 He didn’t expect to have to survive a wild last lap made much closer thanks to his own doing, however. But that was the case as the New Berlin, Ill., driver slid high exiting turn four, tapped the outside wall with the quarterpanel of his Rocket Chassis house car and then smacked the wall with this right-front as he raced toward the white flag.

Somehow, Sheppard gathered his machine in and turned back Pearson’s challenge exiting turn two. Diving low in front of Pearson in turns three and four, Sheppard beat the Jacksonville, Fla., native to the finish by a half second to win his second straight Wrisco Winternationals main event and his third Lucas Oil Series feature of the season.

Bronson, of nearby Brandon Fla., finished third at his home track, while Devin Moran of Dresden, Ohio, and Hudson O’Neal of Martinsville, Ind., completed the top five.

“Oh man, I about gave that one away. That was a crazy race for sure,” Sheppard said. “I knew (turns) three and four was getting really far around on top. (Crew chief) Dan (White) was kinda telling me I need to try the bottom in three and four, and I tried it … well. My car was fine down there, but that lap I entered out a little too wide, and I’m telling you, I got to the middle of the corner and I swear the only thing that turned me down the straightaway was the wall, because there was no turning whatsoever, and I was like, ‘I just gave this freakin’ race away.’”

But he didn’t. Instead, Sheppard earned his second straight $7,000 victory, his fifth overall triumph of the season and his 24th career Lucas Oil Series win, tying him with Hall of Famer Billy Moyer of Batesville, Ark., for eighth on the tour’s all-time victory list.

“I’ve had a really fast car all Speedweeks,” said Sheppard. “It’s finally starting to come together for us here.”

It took the eighth-starting Sheppard half the race to get into position to grab the lead. Second-starting Brandon Overton of Evans, Ga., jumped into the top spot ahead of polesitter Max Blair of Centerville, Pa., on the opening lap and paced the first 20 circuits.

After a pair of uncharacteristic finishes to start the week at East Bay, Overton appeared to have things turned around on Thursday. But following a caution on lap 20 he began to fade through the field, first losing the lead to Brian Shirley of Chatham, Ill., on lap 21 before slipping outside the top 10. Overton finally parked his Wells & Sons Motorsports mount and was credited with a 22nd-place finish.

While Overton dropped from contention after the yellow, the caution midway through the main event was exactly what Sheppard needed.

“I had just passed (Max) Blair before the caution came out and (scoring) went back to the lap before and they put him back in front of me,” said Sheppard. “That was really what got me to the lead because I knew Earl (Pearson) was gonna pick the bottom (on the restart), so if I’m behind (Blair), that puts me on the outside, that’s what I was thinking. So I was like, ‘OK, I’ll let this guy go and if they put him in front of me, great,’ because that’s gonna put me on the outside. Luckily they did and them guys were fighting for the bottom there. (Brian) Shirley took the lead and then immediately went to the bottom, so that just put me right where I needed to be to be able to get it done.”

Shirley was able to grab the lead on the restart, powering by on the outside as Overton fought to find traction on the bottom. After Shirley led lap 21, Sheppard, who was in fifth place on the restart, blasted by on the outside to lead lap 22. Despite another caution on lap 23, Sheppard stayed in control and led comfortably until the final caution waved on lap 38. After he tagged the wall heading to the white flag, Sheppard had to turn back Pearson, who started third and ran second for 38 of the 40 laps.

“I seen Earl right there and I knew at that point the only chance I had was to just send it into (turns) one and two as hard as I could and hope that I come out of (turn) two in front of him,” said Sheppard. “Luckily I didn’t push in one and two and it worked out.

"Man, it was just a crazy race. It was awesome. The car was really good, I could run the bottom or top. I was even OK in the middle there at the beginning when they were throwing crumbs out there.”

Pearson, who was able to pass Blair and move into second on the opening lap, didn’t expect to blow by Sheppard just because the reigning World of Outlaws Morton Buildings Late Model Series champion had a late-race bobble.

“I knew he’d be tough on top there,” said Pearson. "He made a little bit of a mistake, which he don’t usually do, but that lap after that, he didn’t make no more mistakes. We got close to him. Ain’t no doubt he’s a tough guy around here. I guess he loves this place, ‘cause he’s won a lot of races here. Anyway, it was a good night for us. Anytime we can come to Florida and run good, we’re really excited about that. We got two more nights, so maybe we can get us a win here.”

Sitting in third after charging all the way from 16th all Bronson could do over the final two laps was watch the battle in front of him while keeping Moran and O’Neal behind him.

“I was kinda committed to the outside at that point,” said Bronson. “I kinda overheated my right-rear tire coming up through there. After that I was just kinda married to the top there. I didn’t get a good enough restart there at the end, just a driver mistake, just didn’t fire off like I should’ve. I felt like when (Sheppard) made a mistake, I wasn’t (close enough) to (take advantage). It’s just the way it goes. We’ll take it and learn and go work on the car and get a little better for tomorrow and hopefully we’ll be a couple spots better.”

Notes: It was Brandon Sheppard’s 19th career Georgia-Florida Speedweeks win and eighth victory in East Bay’s Winternationals. … Max Blair inherited the pole position for Thursday’s 40-lapper when Garrett Smith of Eatonton, Ga., the apparent winner of the first heat race, was disqualified because his spoiler was deemed too tall by series officials. It was the break Blair needed, helping him to a sixth-place finish after running inside the top five for the first 23 laps. … After leading lap 21, Brian Shirley stayed in the top three until getting into the wall on lap 28. He fell out of the top five for good on lap 31 and then lost two positions on the final lap to finish 10th. … Brandon Overton faded to seventh in just two laps after losing the lead. He completed 31 laps before parking. It was his third straight DNF. Overton, who said he’s yet to figure out East Bay’s tricky surface, said he struggled to get his car to turn after the midpoint. … The race was slowed by four cautions.

Weather conditions are picture-perfect for Thursday’s Wrisco Winternationals action: bright, sunny skies with an afternoon high temperature that reached 70. … Judging by the ample amount of mud on the vintage race cars that East Bay management uses to pack the racetrack, more moisture is in the racing surface than there was for the first two nights of competitions. … The car count has grown to 75 with several additions, including Boom Briggs of Bear Lake, Pa., Brian Nuttall Jr. of Clanton, Ga., Chase Osterhoff of Kankakee, Ill., and Jeff Mathews of Brandon, Fla., who joins his hired gun Cody Overton of Evans, Ga., in the field for the first time this week. … The car driven by Briggs’s teammate, Josh Richards of Shinnston, W.Va., is unloaded in the pit area, but the 33-year-old star won’t compete on Thursday. Richards is taking a day to regroup his personal affairs after his tag-along camper was destroyed in an overnight fire in a Walmart parking lot about about 30 minutes north of the speedway. Richards, who flew back to his home in western Ohio after last weekend’s action at All-Tech Raceway in Ellisville, Fla., parked his camper for the night after spending Wednesday traveling south and had gone to sleep with his wife, Andrea, when they noticed smoke; the couple was able to escape without injury and Richards saved his dually truck from damage, but the camper and its contents were a complete loss. … Jimmy Owens of Newport, Tenn., is back in action after missing Wednesday’s program because he traveled to Oklahoma to visit with his under-the-weather car owner Leon Ramirez. Lucas Oil Series regular voted Owens a hardship exemption, which allows him to still count his best five finishes from Speedweeks despite not entering on show. … Brandon Overton of Evans, Ga., expressed dismay with the East Bay surface after failing to convert a prime feature starting spot into a victory for the second time in as many nights. He led laps early in Wednesday’s feature but again slipped out of the preferred bottom groove, allowing eventual winner Brandon Sheppard of New Berlin, Ill., to assume command for good. “I can’t keep my car on the bottom,” said Overton, who ultimately retired from the A-main due to left-front damage sustained in a scrape with Ricky Thornton Jr. of Chandler, Ariz. “Usually you tighten your car up as the night goes on, but here I guess you have to loosen it up as much as you can to stay in that bottom. It’s a weird place.” … Lucas Oil Series rookie contender Ross Robinson of Georgetown, Del., retired from Wednesday’s feature with terminal engine trouble, forcing him to make a motor swap for Thursday’s program. ... Garrett Smith of Eatonton, Ga., was the fastest qualifier in Group A and led from flag-to-flag to win the first heat, but he was disqualified for the night in post-race tech for running a spoiler that was too tall. The infraction cost him the pole position in the feature.