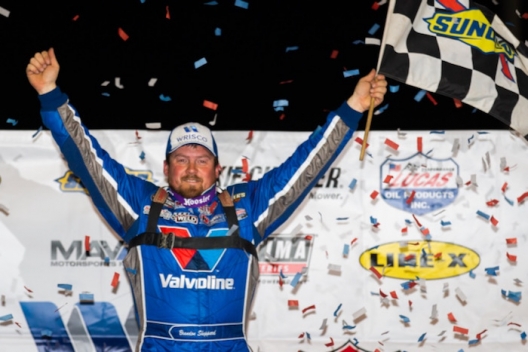 GIBSONTON, Fla. — Pole-starting Brandon Sheppard made the wrong move in losing the lead to Brandon Overton on the eighth lap of Wednesday's Wrisco Winternationals main event. The 29-year-old New Berlin, Ill., driver made all the right moves the rest of the way at East Bay Raceway Park.

Regaining the point from Overton on the 13th lap, Sheppard kept the 26-car field in check the rest of the 40-lapper in becoming the third two-time Lucas Oil Late Model Dirt Series winner of the season.

"(Overton) passed me in lapped traffic there, and when you're leading you don't know whether you need to pull out (to the high groove) and try to pass him guys or what to do," Sheppard said, "so luckily he was missing the bottom there a little bit getting into (turn) one, and that let us be able to get underneath him in one and two. After that I knew I needed to hit my marks and the cautions fell when they needed to fall."

Fifth-starting Ashton Winger of Hampton, Ga., drove under Tyler Erb of New Waverly, Texas, on the last restart to grab the second spot while home-track driver Kyle Bronson of Brandon, Fla., rallied from an early pit stop in the top groove to finish fourth. Ricky Thornton Jr. of Chandler, Ariz., rounded out the top five.

Evans, Ga.'s Overton, a two-time Lucas Oil winner who led laps 8-12, fell from contention after a lap-30 restart and retired in the final laps. His car suffered left-front damage in a turn-two tangle with Ricky Thornton Jr. just after the yellow flag dropped with 11 laps remaining.

Monday's winner Dennis Erb Jr. of Carpentersville, Ill., wasn't a factor in finishing 13th while series points leader Devin Moran of Dresden, Ohio — another two-time series winner — was 10th for his worst finish of the season.

Erb took a few cracks at Sheppard, but the Rocket Chassis house car driver held on for his seventh career Winternationals victory.

"Man, the restarts are really stressful here," he said. "You don't know where to take off at. I took off way too early that one time, but I thought that was gonna you know keep me from getting passed on one of them restarts."

"It feels like you lose about 10 of them before you get a chance to win one," Winger said."I guess if you're gonna run second to anybody, it should be a Brandon. Congrats to them guys. I know they've been working hard, and their cars really good and they got really good program there. We're just a little off. I can't fire off I feel like as good as I need to. Man, them restarts are hectic."

Erb, who held the second spot from laps 16-20 and again from 24-36, wasn't happy with the track's drier-than-usual conditions.

"Just happy to get to second there and then just had to try something on the restart," Erb said. "Went to the top and let Winger get by us. But we'll take it and move on to tomorrow and hopefully the grader and the water truck's got plenty of water, because this isn't the East Bay people want to see."

Bronson, who started 16th, was mired in 17th when he pitted on the first caution. But he got rolling in the high groove to charge into contention.

"We wasn't that good at the beginning of the race, but we come in and made a few changes there and our car got pretty good there, you know. I'm just going to give all the credit the guys and stuff," Bronson said. "After that ... most of the time I had a clear shot (in the high groove.) I could hear my fans up there — you know, that's my hometown crowd — yelling at me, screaming at me for running 15th all week.

"So, you know, we've got to get up on the wheel and give these guys a win before the end of the week. So I'm looking forward to it. We went back to what we know and it was pretty good. We're just going to tweak on that and hopefully I'll be back in victory lane tomorrow."

The 40-lapper was slowed by six cautions, the first two coming back-to-back on the ninth and 10 laps. The initial caution flag dropped when series points leader Devin Moran spun near the turn-three entrance, while another quick yellow appeared Spencer Hughes stopped in turn two.

The third caution appeared on lap 21 for a slowing Freddie Carpenter and the fourth slowdown came out on lap 30 for debris just before Overton and Thornton tangled in turn two, causing left-front damage on Overton's machine.

The fifth and final yellow dropped on lap 37 for the slowing Overton.

Action resumes Thursday with another $7,000-to-win event with favorable weather forecasts the rest of the week after Tuesday's rainout, which won't be made up.