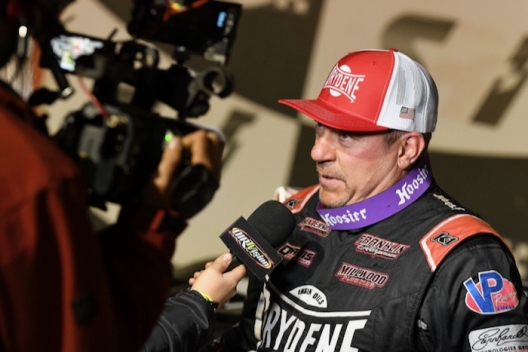 GAFFNEY, S.C. — As one of the only drivers still running on his original right-rear tire late in Sunday’s Blue-Gray 100 feature, it would’ve made sense for Chris Madden to be worried that his tire might not make it all the way to the end of Cherokee Speedway’s annual century grind.

But with the season’s top performing Dirt Late Model driver in the country hounding him through the race’s closing laps, Madden had more pressing matters stealing his attention away from the condition of his tires.

“Anytime Brandon Overton’s behind you, you have to worry,” Madden, the 46-year-old driver from nearby Gray Court, S.C., said of his mindset late in Sunday’s race. “He’s won everything in the country this year.”

Focusing his attention on holding off the red-hot Overton proved to be a good decision for Madden. His tire lasted the entire distance and he held off Overton’s furious late challenging to score a $10,000 victory co-sanctioned by the Drydene Xtreme DIRTcar Series and the Carolina Clash Super Late Model Series.

Madden, who took command of the race when polesitter Ross Bailes of Clover, S.C., suffered a flat on lap 79, crossed the finish line 0.886 seconds ahead of Evans, Ga.'s Overton in scoring the seventh Blue-Gray 100 victory of his career.

Overton, who started fifth and pitted from the eighth position to get fresh rubber on lap 66, was followed by Devin Moran of Dresden, Ohio, in third. Carson Ferguson of Charlotte, N.C., was fourth with Michael Brown of Lancaster, S.C. — who clinched his first Carolina Clash title in the tour finale — rounding out the top five.

Sunday’s triumph gave Madden back-to-back victories to close out a 2021 campaign that saw him finish second in the final World of Outlaws Morton Buildings Late Model Series points standings after a disappointing second half the season. He won the $52,052 Peach State Classic at Senoia (Ga.) Raceway on Nov. 13.

“We’ve worked extremely hard the last few weeks,” Madden said. “We are leaps and bounds better than what we were all year. Hat’s off to my guys for working so hard. We’ve got some speed in it now.”

Madden’s victory didn’t come easy thanks to Overton’s late rally. Running sixth on a lap-80 restart, Overton quickly moved to fourth, then used a high-side power move to jump to second on lap 81.

After catching Madden at lap 90, Overton made multiple looks under Madden and pulled even for the lead at the completion of lap 96. But a lapped car running in Overton’s lower groove curtailed Overton’s momentum on the next lap, allowing Madden to ease away.

“I’d say Brandon was a little better than we was at the end,” Madden said of the late-race battle. “I got a little bit too tight there at the end and had to use my right-rear a little more than I wanted to. I didn’t have any tire left, but I didn’t have nothing to lose but the race, so we just give it all we had.”

Overton also felt he had the better car in the closing laps, but the lapped car hampered his efforts.

“I kinda knew I was screwed when we caught him,” said Overton, who was looking for his 31st victory of the season after scoring a $20,000 victory Saturday at Southern Raceway in Milton, Fla. “He was in the bottom of the racetrack and that takes the air off (the front of the car) and then you’re done.

Overton was looking to win the Blue-Gray 100 for the second straight year after using a mid-race pit stop to make a late charge and win the event in 2020. Using the same strategy, Overton nearly pulled off the win again, but his run through the field came up one spot short.

“I was back there sixth or seventh and said ‘I ain’t go nothing to lose so come in, get some tires and go to the top.’ That’s what I did. Just came up one spot short,” Overton said.

Notes: Madden earned his seventh overall victory of the season. His previous Blue-Gray 100 victories came in 2004, ’06, ’10, ’13, ’15 and ’19. … The race was slowed by 11 cautions, including a red-flag period on lap 28 after a backstretch pileup that left Tim Vance’s car with heavy rear damage. No injuries were reported. … Ross Bailes was looking to complete a weekend sweep after claiming Saturday’s co-sanctioned race and $10,000 at Lancaster (S.C.) Speedway. He ended up seventh after the flat.