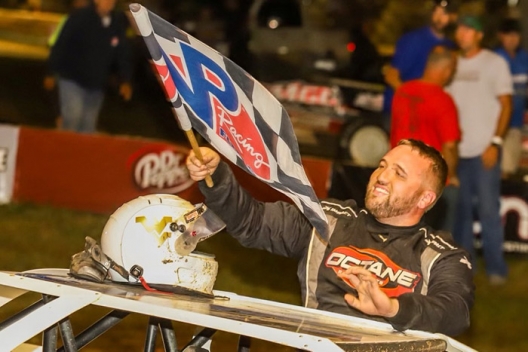 RICHMOND, Ky. — When Zack Dohm pulled into Richmond Raceway after a wet week in central Kentucky, the Cross Lanes, W.Va., wasn't sure the track conditions at the 3/10-mile oval were going to be to his liking. But by the end of the Ultimate Heart of America tour's richest weekend of the season, things couldn't have gone much better.

Capitalizing on a first-lap spin by polesitter Ross Bailes, Dohm led all 59 laps of the 24th annual Paul "Butterball" Wooldridge Memorial to capture Richmond's biggest race for the first time. He took the checkers a half-straightaway ahead of runner-up Scott James of Bright, Ind., for his fourth career tour victory and second of the season.

"It was a nice easy weekend. Two-day show. Stress-free. Everything went good," Dohm said in victory lane, thanking the big crowd. "I'm just glad we did it."

James, who inherited the second spot when two-time race winner Tyler Carpenter of Parkersburg, W.Va., pulled his smoking car to the infield with five laps remaining, secured the second spot with Josh Rice of Verona, Ky., in third. Bailes, the Clover, S.C., driver who started on the pole but was forced to restart on the tail after a first-lap pileup, rallied to fourth and 16th-starting Justin Rattliff rallied to round out the top five ahead of consolation race winner Ricky Weiss of Headingley, Manitoba.

Dohm started inside the second row, but he got by unscathed in the first-lap incident that forced Bailes to the tail and knocked outside front-row starter Jared Hawkins out of contention with several other drivers involved.

The winner was in control most of the way, but Rice got rolling on the high side and threatened him a few times in the high groove before he got into the wall and then lost the second spot on a midrace restart following the departure of the smoking car of Henry Hornsby III of Beckley, W.Va., the track's Damn Yankees 50 winner for Crate Late Models two weeks earlier who was lurking outside the top five when his car was pushed to the pits.

Carpenter took up the chase before tell-tale smoke forced his car to the infield for the final caution on lap 54, and he climbed out of his car just inside turn two, slamming his fist onto the car's roof before removing his helmet and slamming it in the same place.

Dohm kept James in check on the final restart and raced to the richest victory of his car, narrowly surpassing a $20,000 payday on July 4 Beckley (W.Va.) Motorsports Park.

"I can't believe we finally won this race," said Dohm, who finished third the previous three seasons in the race known simply as the Butterball. "I don't know how many times I've run top-fives or top-three in it; it feels like 10. It seems like something always happens. We always are pretty good and run second or third, but man, tonight was perfect.

"The way the track (surface) was yesterday when we got here after the rain, I thought, man, we ain't ever going to win one of these things. We qualified good, won my heat, got a good starting spot. I think we led every lap. So it was awesome."

James wasn't hanging his head at finishing between Dohm and Rice — "Sandwiched in between these guys, we've got a pretty good hot rod," he said — but added that "we've gotta try to get some speed, I can see that. We're second a lot, but we're just not winning."

The fifth-starting James was "just not good enough to beat Zack — again," he added. "Josh was good. It was good run racing out there, but Zack's got these little bullrings figured out. I don't know, I think it's like the seventh time I've run second to him."

Rice, who started fourth, put pressure on Dohm but a wall-sparking ride in turn two among other high-side challenges were part of his undoing.

"I got a little excited there and got up into the wall," Rice said. "I don't know if we sealed the right-rear (tire) up or what, but when we went back to green, I was terrible. I was trying to get wide there at the end. I just, everything went away, and I was just bad there at the end.

"Congrats to Zack. As soon as we went green, I was like, 'Oh boy, we're in trouble.' Congrats to him and Scott, you know, we actually raced pretty good here. (The track surface) got wide for the first time, and I was pretty excited to see that."

Notes: Dohm has several previous Richmond victories, including the Ultimate Heart of America opener on April 3 paying $5,055. ... Michael Chilton retired after stopping midrace between turns one and two. ... Ross Bailes rallied back into contention, breaking into the top 10 by mid-race and grabbing fourth from Justin Rattliff late in the race.