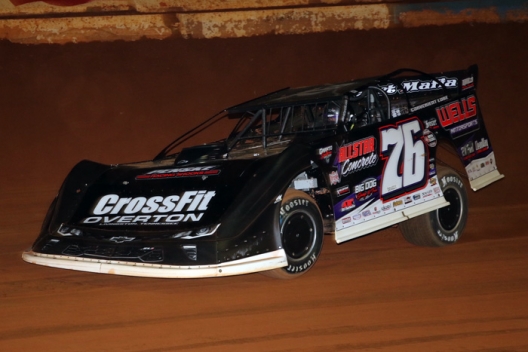 GAFFNEY, S.C. — A month ago at Cherokee Speedway, Brandon Overton of Evans, Ga., pulled off a dramatic high-side pass that carried him to victory on the World of Outlaws Morton Buildings Late Model Series.

On Friday, it was second verse, same as the first.

After chasing upstart Daulton Wilson of Fayetteville, N.C., the first 25 laps at the 4/10-mile oval, Overton used a lapped car as a pick in turns three and four, rolled around Wilson and led the rest of the the Mike Duvall Memorial to earn $10,000 and his fifth WoO victory of the season.

The pole-starting Overton took the checkers a half-second ahead of series points leader Brandon Sheppard of New Berlin, Ill., while Wilson, who started outside the front row, settled for third in a bid for his first national touring victory. Home-track racers Chris Ferguson of Mount Holly, N.C., and Chris Madden of Gray Court, S.C., rounded out the top five.

“(Wilson) was good; I just kind of got back there to see where I’m better, or I’m worse,” Overton said. “He was just slidin’ up and kind of blocking my momentum, so I couldn’t really roll past him. So, I told myself just slow down and maintain.

“I think I seen Sheppard underneath me one time, and I was just like if I don’t go, he’s going to pass me, and I didn’t want him to get by me if the caution come out.”

Sheppard provided some pressure in the closing laps, but Overton, DirtonDirt.com's top-ranked driver, locked up his 18th career victory during his stellar season.

“We had a pretty good car there; it’s just super hard to pass, especially (Overton's) 76 car, he’s been good all year,” Sheppard said. “We’ve ran second at this place quite a few times in seems like so we’re definitely itching to get a win here. But like I said, our car is really good, so hopefully, we can finish off the year strong and with a good head of steam going into next year.”

Sheppard’s runner-up finish clinched his third consecutive Series championship and fourth overall, tying Josh Richards for the most all time. He’ll officially claim that title at the NGK NTK World Finals on Nov. 4-6 at the Dirt Track at Charlotte.

Wilson's third-place finish left him knocking on the door for his biggest career victory.

“I got out front and led some laps, and it’s not a matter of if it’s when here when you get into the lapped traffic, and you’re the leader,” Wilson said. “You can’t get off the bottom, you know it’s coming, but to get outrun by the top two drivers in the country it says a lot for us and our program, and we’re just going to keep building on it and hopefully next time we come out on top.”