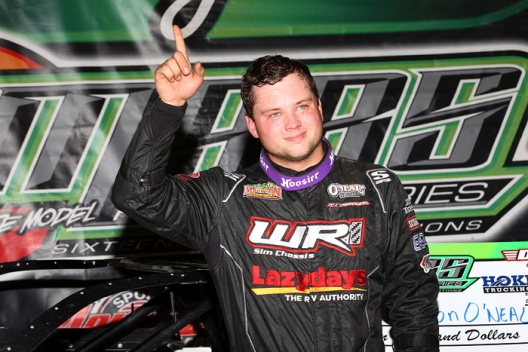 DAVENPORT, Iowa (July 27) — With a late caution erasing a 2.198-second lead, sixth-starting Hudson O’Neal had to hold off two of the nation’s hottest drivers in second-running Brandon Overton of Evans, Ga., and third-placed Bobby Pierce of Oakwood, Ill., in a two-lap shootout at Davenport Speedway.

Beating Overton to the finish by a scant 0.026 of a second, O’Neal of Martinsville, Ind., won Tuesday’s MARS Racing Series main event on the tiny quarter-mile at the Mississippi Valley Fairgrounds. O’Neal had the dominant car after taking the lead on lap 25 and pacing the the final 26 laps, but a caution on lap 48 for a slowing Jason Feger of Bloomington, Ill., forced him to stave off Overton’s late charge.

The two appeared dead even as they crossed the finish, with O’Neal barely nipping the nation’s top-ranked driver in the latest DirtonDirt.com driver rankings. Pierce, the nation’s third-ranked driver after reeling off 12 DIRTcar Summer Nationals victories — Overton and Pierce were the only two to receive first-place votes in Monday’s poll — finished third, while Brian Shirley of Chatham, Ill., improved one position to finish fourth. Garrett Alberson of Las Cruces, N.M., rallied from 11th to complete the top five.

The finish was reminiscent of the May 29, 2020 World of Outlaws feature at Davenport when Brandon Sheppard of New Berlin, Ill., nipped Ricky Thornton Jr. of Chandler, Ariz., by mere inches to win. O’Neal said that’s what he was thinking about as he streaked toward the finish.

“If you want me to be honest, I was thinking of (Brandon) Shepherd and (Ricky) Thornton,” he said. “You know, that was kind of in my head whenever we crossed the line. I wasn't even looking straight ahead at the straight away when we come to the finish, I was looking out the window. I felt like I drug (Overton) a little bit, but it's so hard to tell here (because) this place is so circular. We're just lucky enough to be able to pull it out.”

Overton fell just short of his 20th victory of the season.

“I knew we were close,” said Overton. “It was just good hard racing. We all raced there together and I don't think any of us hit. It was an awesome racetrack. I just want to thank the guys and everybody who put this on, the MARS Series. I might have to come back. This place is awesome, a cool little place.”

It was indeed racy on Tuesday. Polesitter Stormy Scott of Las Cruces, N.M., jumped ahead of Feger, Shirley and Overton on the start and paced the first 24 laps. Scott was in command on lap 23, Rich Bell slowed to draw a caution. O’Neal shot to second on the restart and took the from Scott with an outside pass down the backstraight a lap later.

“We fell back a little bit further than I wanted to (at the start),” said O’Neal. “I felt like we could have got up there and been on the front row of that restart. Feger jumped the berm over here just a little bit and we made some contact. I just couldn't get whoa'd up before I hit him. I hate that for him. All in all it was a great effort by my guys. We weren't that good in hot laps and we rebounded in qualifying. Then we put our heads together and made the right decision and that’s hard to do with this group of cars.”

O’Neal raced comfortably out front over the next 20 laps, building a one-second advantage over Overton with 10 laps remaining. But his lead of more than two seconds vanished with the feature’s third and final caution flag.

“I didn't want to see (the caution) at all,” said O’Neal. “I was kind of aggravated when I did see it, but you know that's just part of racing. I had to get up on the wheel. I’m kind of out of breath. That's probably the hardest I've had to drive for a whole 50 laps in a long time. It was a great race. Brandon was all over me. He had a way better short-run car than I did.

“After about five laps I felt like I could steady my pace out a little bit, but he could give me a good run on those short runs. I think he had a little bit better race car they're right at the end. We were just lucky enough to hold him off.”

Pierce said he was too busy trying to keep Shirley at bay on the restart to challenge the leaders.

“I was trying to hold off (Brian) Shirley for third there,” Pierce said. “I was kind of a sitting duck for restarts. I'm terrible on this dirty stuff. Im just not good in it. It's just not my forte. Everytime we had a good run going, the caution would come out. Heck we were four-wide going into turn three there that one time and I was looking at second and a caution came out again. I thought, man, we are struggling on the restarts, but it is what it is. Congrats to Huddy on the win. I feel like I tried to push it too hard (early). The second I tried to slide him he got going on top and that was the last I saw of him.”