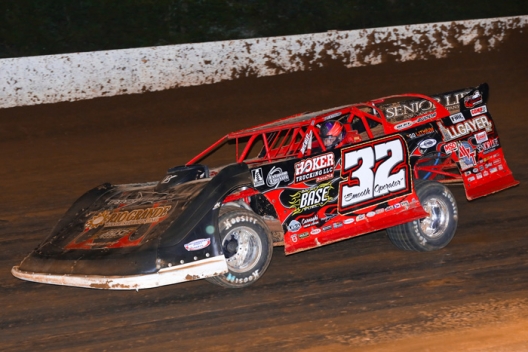 RICHMOND, Ky. — Series points leader Bobby Pierce of Oakwood, Ill., led 40 unchallenged laps Sunday in the tour debut at Richmond Raceway for a $5,000 DIRTcar Summer Nationals victory. Pierce took the checkers 4.540 seconds ahead of Ashton Winger for his 11th victory in the 22nd event of the season.

Hampton, Ga.'s Winger was followed to the finish by Tanner English of Benton, Ky., who ran third after hold the second spot the first five laps. Joe Godsey of Edinburgh, Ind., and reigning track champ Derek Fisher of Olympia, Ky., rounded out the top five.

The race was run more than an hour after Late Model feature cars originally hit the track. Because the surface was overwatered during intermission, mud-packed Late Models were sent back to the pits so the modified feature could be run. The Late Models returned about 10:10 p.m. for their second attempt to start the event, which concluded about 10:40 p.m.

The race had four slowdowns, including a scrapped initial start when Jeff Roth spun between turns one and two and drivers scrambled to avoid him. Jason Jameson, Thomas Hunziker, Tegan Evans, Brandon Lance, Mike Fenton and William Byrd were among cars involved.

Another pileup came in turn one on the lap-six restart, drawing a red flag with Jameson, Hunziker, Evans, Lance, Fenton, Jeff Watson and Justin Rattliff in a wad after bumper tag went awry with a track-blocking incident. The right-front corner of Rattliff's car was wedged under the rear of Watson's machine, requiring several minutes for track workers to disconnect them.

Among other cautions, Tegan Evans spun in turn two for a lap-six yellow and a yellow appeared on lap 15 with Scott James heading pitside.

The series returns Monday with its second consecutive event at a first-time series track in Kentucky at Burnside's Lake Cumberland Speedway, another $5,000-to-win race.

Notes: Pierce's 38th career series victory leaves him one shy of Don O'Neal in third place all-time with 39 victories. .... Nine drivers finished on the lead lap. ... Scott James and Derek Fisher tangled while battling for the lead in the second heat, dropping them both to the tail for the restart of the prelim and leaving them with mid-pack starting spots in the feature.