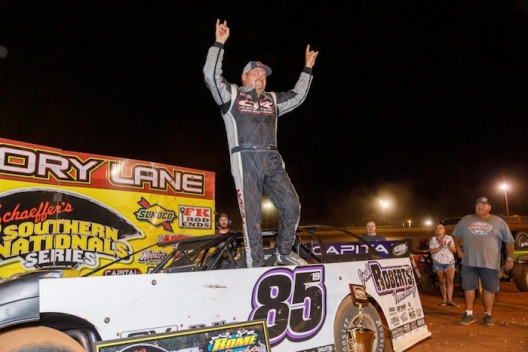 With an absolute dominating performance from the pole position Sunday at Rome, Weaver won his first Southern Nationals feature since 2015. He pulled ahead of Dale McDowell at the start of the 40-lapper and cruised to victory over third-starting Donald McIntosh, finishing a comfortable 5.110 seconds ahead of the Dawsonville, Ga., driver for a $4,053 triumph.

Shuffling McDowell of Chickamauga, Ga., back to fourth on lap 31, fifth-starting Austin Horton of Newnan, Ga., who won the series stop at West Georgia Raceway in Whitesburg on July 22, grabbed the final podium spot. McDowell held on to finish fourth after starting alongside Weaver on the front row and Dalton Cook of Columbus, Ga., picked up one position to complete the top five.

“I really owe it all to Richard Austin and all the crew,” said Weaver. “You know Josh Roberts (is) giving us all this good equipment. Man I'm telling you he oughta pick somebody that works for him at his (trucking business) to drive that thing. It's that easy. It's not like that a lot, but it's still hard on an old fat guy.

“I’m telling you that race car is the best car I've had here. Phantom race engines, I'm telling you all kinds of power. I knew I needed a lot of it to get that start. It was real drivable. After (getting the lead) we just kind of rode and tried to take care of our tires. It's been a long time since I've won one here. It feels good.”

Weaver, who stepped away from driving following a devastating 2016 crash at East Alabama Motor Speedway in Phenix City that left him with nagging post-concussion syndrome, has slowly worked his way out of retirement over the past two seasons. On Sunday, he hardly looked like a semi-retired 52-year-old. He bolted ahead of fellow veteran McDowell and was never challenged in a race slowed by only one caution, a spin by Jeff Neubert of Knoxville, Tenn., on lap three.

Over the next 37 circuits, Weaver had plenty of time to build his commanding lead. On lap 20, he was out to a 1.082 second advantage over McIntosh, who slipped by McDowell for the runner-up spot on lap four. Weaver’s lead was up to 3.469 seconds with 10 laps remaining, despite working his way through a few straggling backmarkers. And with five to go, the lead continued to grow as it ballooned to 6.232 seconds. Weaver said getting a dominating machine was a product of his team tinkering with the Capital Race Car throughout the night.

“We worked on it every time we come off the racetrack,” said Weaver. “I just tell Richard kinda the feel I have and how much we need to go and he does his thing and I try to do mine. It's fun to race with these guys and in Super (Late Model) stuff again. We've had a good little quiet year, but honestly we all just group up and when we got time we race and we have fun. I really enjoy that part of it.

“Back at the end of my career when I was racing all the time it got where it wasn't as fun, but man like I told somebody a while ago, everything I've ever done I owe it to somebody else. I want to thank the Lord for letting me come back to race after that bad wreck. Man it just feels good. Maybe we can win a couple more.”

McIntosh’s futile chase came aboard his Blount Motorsports team’s back-up car, the No. 4T machine typically piloted by Tommy Kerr of Knoxville, Tenn. After middling finishes of fourth, 10th, eighth and 11th in his primary car, McIntosh, who steered Kerr’s mount to his best series finish of the season, said runner-up “feels almost like a win tonight so I'm glad to get it.”

“Honestly we've had a really rough year to be honest with you,” said McIntosh, whose second-place finish bumped him up up into the Southern Nationals Series points lead heading into Monday’s scheduled day off. “I really didn't know what to expect. I really think this (car) is better than the car we've been running. … It's a good point tonight and we will go on to Tri-County. If it’s my call we’ll run this car.  We'll keep on running this one. We'll talk about it and see and hopefully we can have some luck good luck the rest of this deal and have some speed.”

Horton, seeking his third series win at Rome, managed to pick up two positions by dispatching both McDowell and fourth-starting Zach Leonhardi of Cartersville, Ga. It took him awhile to get by McDowell, but Horton finally picked up the spot on lap 31. Horton, who won here in both 2017 and ’18, said his outside-the-box effort to find a slight advantage backfired.

“I gambled a little bit being as how we couldn't run a hard right front and I went a little different (on the) right front than everybody probably here,” said Horton. “It wouldn't steer qualifying and it didn't steer through the race. So we just had to kind of hold on. Hindsight is 20/20, but we had to try it to see if we could get an advantage and it didn't play out.”

Notes: Rome hosted the fifth round of the Schaeffer’s Southern Nationals Series. … Eleven of the 19 starters completed 40 laps. … Eight drivers — McIntosh, McDowell, Neubert, Jensen Ford, Cody Overton, Garrett Smith, Ahnna Parkhurst and Jordy Nipper — have perfect attendance after five events. … There’s yet to be a repeat winner on the tour this season. … Weaver joined Horton as the only two-time Southern Nationals winners at Rome. … After Monday’s day off, the Southern Nationals series heads to Tri-County Racetrack in Brasstown, N.C., on Tuesday.

Veterans Randy Weaver of Crossville, Tenn., and Dale McDowell of Chickamauga, Ga., set the quick time in their respective groups and will leads Sunday’s 19-car field to the green for the 40-lap main event. … Weaver, who is sixth on the Schaeffer’s Southern Nationals list with seven career wins, hasn’t won a series feature since 2015 at Smoky Mountain Speedway in Maryville, Tenn. Weaver won a tour race at Rome in 2014, during his most productive year on the tour in which he had three victories. … McDowell has six series wins. … There will not be any heats or consolation races. The first group will occupy the inside row, giving Weaver the pole position, with the second group taking up the outside row. … Sunday’s 19 entries is the lowest in five events for the Schaeffer’s Southern Nationals this season. …  Zach Leonhardi of Cartersville, Ga., who starts fourth, is making just his second start of the season. Leonhardi is making use of an engine provided by Jim Harrah. … After making a couple of attempted series starts in car fielded by Tennessean Joe Denby, Sam Seawright of Rainsville, Ala., is back in his own equipment at Rome, but is competing in the Crate division. … Donald McIntosh of Dawsonville, Ga., is driving the No. 4T usually driven by his Blount Motorsports teammate Tommy Kerr.