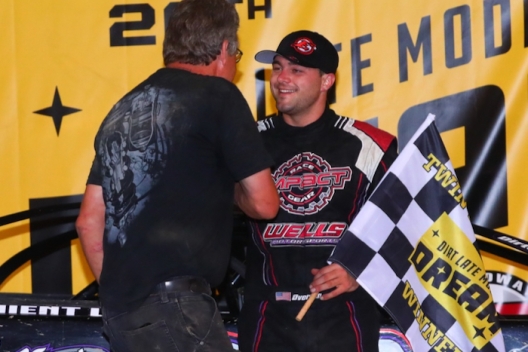 ROSSBURG, Ohio — Brandon Overton's been in victory lane so much during Eldora Speedway's Double Dream weekend that track owner Tony Stewart might start charging rent. He'd have no problem affording it.

The 30-year-old Evans, Ga., driver made his nightly visit to the Big E's victory stage again Friday, dominating yet another race with a $10,000 Dream XXVI prelim victory and setting up a chance to win unprecedented back-to-back crown jewels at Eldora over a 48-hour period.

Overton rolled past early leader Ryan Gustin with ease on the eighth lap and cruised the rest of the way at the historic half-mile oval, taking the checkers nearly four seconds ahead of Gustin and raising his earnings for the week to nearly $150,000. Friday's $10,000 paycheck was added to Wednesday's $10,000 prelim victory along with Thursday's whopping $127,000 payday for Dream XXVII.

"This thing's just awesome right now. You know, we've been working really hard, going different places in different conditions and just trying to dial 'er in," Overton said of his Wells Motorsports Longhorn Chassis that has 14 victories in 2021. This thing, I feel like anybody could get in it and drive it. It feels really good. It just fits me. If I can get it the way I want it, I feel like I can hold my own out there."

The fourth-starting Overton was clearly more than holding his own in adding to his dominating Eldora week, while the pole-starting Gustin, of Marshalltown, Iowa, finished a solid second in the 25-lapper. Darrell Lanigan of Union, Ky., started alongside Gustin and settled for third while eight-time Dream winner Scott Bloomquist of Mooresburg, Tenn., and ninth-starting Kyle Larson of Elk Grove, Calif., rounded out the top five.

Thanking his fiancee, sponsors, supporters and crew, Overton set himself up for an unprecedented fourth night in a row in Late Model victory lane with Saturday's $126,000-to-win Dream — a makeup from last season — providing one last tantalizing challenge.

The success "says a lot about the crew. They were busting their butts," Overton said in victory lane. "If we can just keeping making the right adjustments for this thing, keep dialing 'er in. It was a lot slicker. There wasn't much brown (patches in the racing surfaces) to get a hold off. We're all right. We're right there. We just need to make sure we don't do nothing stupid."

Gustin gamely tried to keep Overton in check, but there was no stopping the No. 76 juggernaut when he rolled by on the ninth lap.

"Overton is just fast, that's all there is to it," Gustin said. "We changed a few things for that feature. We're a lot better, but we just got a little bit too tight. I think once we can steer, I mean, we'll be better. I don't know if we'll be as good as he is, but we'll sure give it our best shot and hopefully we'll be up there tomorrow."

Lanigan, whose lone Dream victory came in 2003, was glad to be in the mix in his Randy Thompson-owned Club 29 Race Car.

"That's pretty cool to get up there and run in the top three with these guys," the third-place finisher said. "Brandon's been super tough up here this weekend and just hopefully we can work on this thing a little bit and run with him tomorrow."

The 25-lapper ran caution-free after the initial start was called back for debris and 17 drivers finished on the lead lap.

Ryan Gustin starts the first 25-lap preliminary feature from the pole position after emerging victorious in a stirring battle for the lead with fellow open-wheel modified ace Ricky Thornton Jr. in the third heat. The two mod men crossed each other a couple times in the final laps. “That was bad-ass,” Gustin said. “That’s all there is to it.” … Hudson O’Neal was left as spectator for the evening’s feature after his Double Down Motorsports crew wasn’t able to install a new rearend in his car in time to start the B-main. The 20-year-old said they needed “about five minutes” to complete the work. … Tim McCreadie might have pulled off the move of the qualifying races when he split two cars heading to the white flag to grab the final transfer spot in the second heat. … Scott Bloomquist’s car was leaking oil after his Heat 4 triumph, but his team did not think it was a sign of a larger problem. … Odd reason for a caution flag: during the second heat, officials had to flick on the yellow lights because a beach ball that fans were batting around in the stands had jumped the catch fence and was rolling down the homestretch. … Austin Kirkpatrick’s self-designed AK Race Car sustained significant damage both front and rear in a multi-car B-main wreck. After Kirkpatrick bounced off the homestretch wall and began to limp to the bottom of the track, Jeep Van Wormer rammed Kirkpatrick’s machine from behind and pushed the No. 11K into the inside wall. … Van Wormer, who was running his Rocket car after loading up his 2-race-old Longhorn mount due to damage it sustained on Thursday, was towed off the track along with Kirkpatrick. … Also part of the Kirkpatrick-Van Wormer wreck was Ryan Missler and Logan Roberson, who tangled at the top of turn one. … Teenager Parker Martin’s night ended due to terminal engine trouble in time trials.

Dream XXVII winner Brandon Overton certainly didn’t have much time to savor the richest victory of his career. He said he hung out in the pit area until maybe 3 a.m. — just two hours after the completion of the rain-delayed program — and then shifted into Dream XXVI mode as soon as he awoke this morning. “Normally you win a big race here and you bulls--- in the pits until like 4 in the morning and then you get up, talk about it more on the way home and talk about it even more the next couple days,” Overton said. … Overton also noted that he talked to his engine builder, Glenn Clements, about how his team should examine their engine, which overheated late in Thursday’s 100-lapper. He said it didn’t lose any water and “everything else seemed good,” so he’s confident that the powerplant, which was new for this week’s action, wasn’t damaged. … Jeep Van Wormer is back in his Rocket after the Longhorn he debuted at Eldora’s Johnny Appleseed Classic on May 30 was damaged in a consolation race wreck on Thursday. … After crashing his Bloomquist car hard in a wreck in his B-main scramble that included Jason Feger’s wild flip on Thursday, Kyle Strickler is fielding a Longhorn he purchased from Alabama driver Josh Putnam’s car owner Jeff Greer. It’s the first time Strickler has raced the car since buying it in mid-May. … Scott James won a B-main scramble on Thursday to earn the final starting spot in the 100-lap headliner, but he pulled off early to save laps on his engine after leader Brandon Sheppard caught him. … Ricky Thornton Jr. made an engine swap after experiencing terminal problems early in Thursday’s feature. … Kent Robinson is hoping for better luck in the second half of the double Dreams after being slowed by engine trouble on Wednesday and knocking the steering rack out of his car in a B-main scramble with another car. ... G.R. Smith’s Brodnax Shaker Motorsports car was sidelined for the remainder of the weekend with engine problems in Friday’s hot laps. … Drivers who have scratched from further action this weekend include Jimmy Mars (mechanical), Jason Riggs (heavy damage from a B-main wreck on Thursday), Duane Chamberlain (engine) and Freddie Carpenter.

The format was amended for 24-car preliminary feature lineup. There’ll be a three-car inversion for heats. Among transferrees to the feature, heat winners will make up the first two rows and heat runners-up rows 3-4 (inverted by qualifying time from slowest-to-fastest). Row 5 will be the two third-place heat finishers with the fastest qualifying times (slowest-to-fastest); the other two third-place finishers will be in the sixth row by finish with fourth- and fifth-place finishers in rows 7-10 lined up in order by heat finish. Four consolation transferrees complete the field. …. Officials announced that for the remainder of the weekend any driver who slows or stops on the track to draw a caution but doesn’t have a flat tire with be penalized one lap. In addition, if a driver stops their car on the track after the pace truck leaves the pit area to pick up the field under caution, the offending racer will be put to the rear of the field. … Another notable announcement made by officials during the drivers’ meeting: the cars driven by the top-three finishers in Saturday night’s 100-lap Dream XXVI finale will be impounded overnight in Eldora’s all-purpose building until 12 noon on Sunday. Tech officials will perform a thorough inspection of the cars; there are rumors circulating through the pit area that one of the items officials will be watching for is traction control.