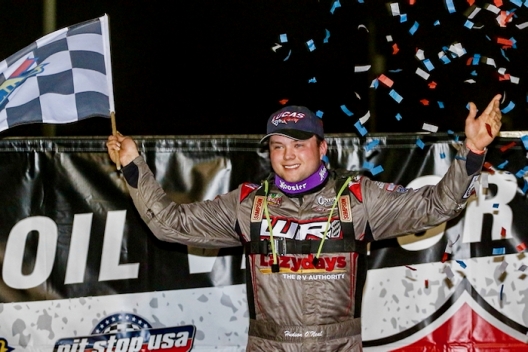 Third-starting Hudson O'Neal of Martinsville, Ind., moved atop the national tour's standings for the first time in his career with a $12,000 Buckeye Spring 50 on Sunday at Atomic Speedway as he led the final 42 laps, topping Tim McCreadie by a half-second at the checkers.

"I've never had a ton of luck here," said the 20-year-old O'Neal, who is in his first season driving for Tennessee-based Double Down Motorsports. "I've always qualified good and started good here but could never seal the deal, but I was able to do that tonight."

McCreadie, the Watertown, N.Y., who started 11th, pressured O'Neal just before a mid-race caution but never got that close again while Devin Moran of Dresden, Ohio, led laps 4-8 before settling for third. Fast qualifier Jonathan Davenport of Blairsville, Ga., was fourth and Kyle Bronson of Brandon, Fla., rounded out the top five.

Pole-starting Kyle Strickler led the first three laps before Moran's backstretch move put him out front, but O'Neal took advantage after the race's first restart to take command on the ninth lap. Moran, Strickler and Tanner English mixed it up until Strickler demise against he turn-three wall that forced him out with a flat right-rear tire.

McCreadie began stalking O'Neal on the restart and took a crack at the lead midrace just as the third of five cautions appeared, resetting O'Neal out front. He kept McCreadie in check the rest of the way to move into the series points lead.

"The big key was to make the right changes and stay in clean air. I think we were able to do that all night. What an awesome feeling to take the lead early," said O'Neal, who won his second Lucas Oil victory of the season and ninth of his career. "I know McCreadie was all over me there a couple of times, maybe the whole race.

"Definitely my palms sweated the whole time. All it was going to take was one mistake, so I'm just happy we were able to (win)."

McCreadie knew he lost an opportunity with the lap-25 slowdown.

"I didn't need the yellow there. It looked like he got a little lost on the track, which happens when you're leading — I think it happened (to Moran) earlier," McCreadie said. "You're out there cruising along thinking you're all right, and someone moves around. And that's kind of what I did. I moved around and found something over here that was really good. Of course when the yellow came out, his guys kind of told him I was gaining there, and I just couldn't get through (turns) one and two good. All in all, we passed a lot of cars, a lot of good cars. We've just gotta start further up.

"I wish I could've been a tick better, but that's OK, no shame in finishing second."

Moran, who posted his fifth podium finish in his last six starts, said his Tye Twarog Motorsports car "really, really good. It continues to be good. We're going to get a bunch of wins this year, we've just gotta keep our heads up and keep working hard."

The feature was slowed by five minor cautions, two in the final four laps. Josh Rice drew a lap-eight yellow and a lap-19 slowdown for Strickler. A lap-25 caution appeared when Clint Keenan's car stopped in turn three with a flat right-front tire.

The final yellows appeared on lap 47 when Ricky Thornton Jr. spun on the backstretch and again on lap 48 with Joe Godsey in the turn-four fence.

Atomic's event was the lone completed race of the weekend after Saturday's Indiana Icebreaker at Brownstown (Ind.) Speedway was halted mid-program because of high-speed and rugged track conditions that sent three competitors into rollover accidents. The race was rescheduled to be completed on May 2.

The series takes a lengthy break before returning to action April 17-18 at Hagerstown (Md.) Speedway and Port Royal (Pa.) Speedway.

Notes: Sixteen drivers completed 50 laps With 29 cars, track promoter Brad McCown elected to start all entrants in the main event. ... Clint Keenan made his first Lucas Oil start. ... Tyler Carpenter got into the turn-two wall on the first lap of his heat race while starting outside the front row. ... Tristan Chamberlain lost a driveshaft in the final heat. ... Steering issues in time trials put reigning series champ Jimmy Owens in an early hole in the night's event. He pitted early in the main event and rallied back to finish sixth. ... Stormy Scott of Las Cruces, N.M., a regular on the series the last two seasons, skipped the Brownstown-Atomic weekend. ... Three-time series champion Jonathan Davenport also skipped Brownstown, the first series race he hadn't entered since joining Arkansas-based Double L Motorsports for the 2018 season. Davenport won Saturday's $50,000 unsanctioned feature at a dirt-covered Bristol (Tenn.) Motor Speedway. … Drivers received 50 showup points for the postponed Brownstown event that's set to be completed May 2. ... Brandon Overton of Evans, Ga., led series points heading into the weekend but gave that up with the Well Motorsports electing, as expected, not to follow the complete series schedule.