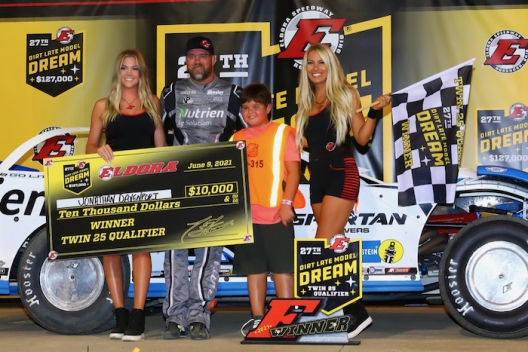 Never headed by runner-up Jimmy Owens, Davenport cruised to a 1.153-second win over the likeable, gum-chewing driver from Newport, Tenn., earning $10,000 for his sixth career Dream preliminary feature triumph, more than any other driver.

Fifth-starting Jacob Hawkins of Fairmont, W.Va., finished third, while Mike Marlar of Winfield, Tenn., dropped one position to finish fourth and Brian Shirley of Chatham, Ill., rallied from 12th to complete the top five in a race slowed by two cautions on laps 9-10. The yellow flags — both for debris — did little to slow down Davenport, however. The winner’s biggest concern was a bit of light body damage his Longhorn Chassis received when he barely brushed the wall one time.

“I scratched her up right there,” Davenport said after emerging from his car in victory lane. “I got a little too high over there in (turns) three and four and skinned it up just a little bit. But she ain't a race car until she's got some scratches on it.”

Often to be expected at Eldora as drivers creep increasingly close to the wall looking for more speed, the scratches — barely visible on Davenport’s fleet No. 49 — were the result of his lone miscue in Wednesday’s nightcap. He bolted into the lead from the pole position on the start, pulling away from Owens, Marlar, Hawkins and NASCAR star Kyle Larson of Elk Grove, Calif. When the first caution waved on lap 9, Davenport led Owens by 1.247 seconds. His lead ballooned to more than 2 seconds at one point as he continually pulled away.

“Man I tell you what, this might be the best car I ever drove around here,” the 2015 Dream winner and three0-time World 100 winner said. “It was really good. I could run right through the middle or right on the wall. I don't know how much I would slow up around there when I run around the inside wall, but she run right around there pretty good. I just got to thank my guys, Jason and Clint, Vinnie, Matt.

“We put this car up (in the trailer) for almost two months just to beat on our other one and save this one for here for this purpose right here because I knew this was a good piece.”
Davenport said his 15th win of the season — he had just five in all of 2020 — was the result of “great race cars” and “team chemistry.”

“Everything's gotta click,” he said. “These guys we race against here are so good if you're off just a little bit and then you start chasing yourself, they're just going to get better and you're just going to get worse. We just started the season off really well with help from Kevin Rumley. We changed a few things up. We changed to Bilstein Shocks and they've been great for us.

“Our (marketing) partners have come back to support us … Nutrien Ag Solutions, ASC Warranty, Spartan Mowers. We got Fathead Sunglasses this year. Just all of our product sponsors. Longhorn Race Cars. We had a Cornett (engine) tonight. We switch time between Cornett and Clements and both of them do a real good job for us.”

Though he chased Davenport throughout the 25-lapper, Owens was pleased in his runner-up finish. He was the only other driver during time trials who managed a sub-15-second lap and although he finished second in his heat race, he started along Davenport on the front row of the feature thanks to Eldora’s weekend format that reverts back to qualifying lap times for each of the top two heat transfers to set the future lineup.

“It's a great start for the weekend,” Owens said. “The car's been really, really good ever since we unloaded. Just looking forward to tomorrow and having a good run in our heat race and everything and maybe we can get a little better take off.”

Hawkins was running fourth on the lap-nine caution before slipping back to fifth behind Larson. On the restart a lap later, he was able to regain the spot while also getting by Marlar. He held on over the final 14 laps to record a satisfying podium finish.

“Honestly it's awesome,” said Hawkins. “We lost one of our car owners, Jim (Stout). We wanted to come out here and give him a good showing and you know I think we did. I think we've got a car to compete. It's just nice to be competitive out here. I know things out here can change, but hopefully we can build off this momentum and continue this on to the rest of the weekend.”

Notes: After the victory lane ceremonies, Davenport’s 9-year-old son Blane spun the wheel of misfortune to determine the invert for Thursday’s heat races. The dreaded wheel stopped on No. 2. … During his victory lane interview, Davenport thanked the crowded in attendance on Wednesday. “It really sucks trying to put on a show for a TV Camera,” he said in reference to last year’s two Eldora events held without fans. “We're glad you're back and hope you're here to stay.” … Zack Dohm of Cross Lanes, W.Va., slowed on lap six with a broken driveshaft but managed to coast back to the infield pit area. … Kyle Larson, who tagged the wall slightly on lap seven, was shuffled back to eighth on a lap 10 restart and could not climb any higher..

Josh Rice was headed to a runner-up finish in the fourth heat when his car’s engine went up in a thick cloud of smoke exiting turn two on the final lap. He then limped into the pit area with the motor still screaming and smoke and oil pouring out of it; it kept running even after Rice hit the kill switch due to a condition known as “dieseling.” The engine was finally shut off when the air cleaner was covered up. … Young Virginian Logan Roberson flashed a big smile after a third-place finish in the first heat sent him to the preliminary feature in his first-ever appearance at Eldora. “That was awesome,” Roberson said. “I was just gonna be happy to get close to making it, and I ended up beating (fourth-place) Billy Moyer in my first time here.” Roberson’s only previous visit to Eldora came three years ago when he was a spectator with his father. … Robby Hensley scratched from the third heat due to terminal engine trouble that brought an early end to his Dream weekend.

Former World 100 champion John Blankenship of Williamson, W.Va., is back in action for the first time since the 2019 World Finals at The Dirt Track at Charlotte, piloting a brand-new XR1 Rocket car fielded by his father Don. The No. 23 is wrenched by Tom Buckingham, who will also offer technical assistance this week to Double Down Racing driver Hudson O’Neal of Martinsville, Ind.; in fact, O’Neal is parked alongside Blankenship in the pit area, and Blankenship was able to get a new Rocket car in recent weeks using a spot in the company’s order line held by Double Down owner Roger Sellers. … Open-wheel modified ace Nick Hoffman of Mooresville, N.C., whose last full-fender competition came in last June’s Stream Invitational at Eldora, is driving a Hatcher’s Motorsports Team Zero entry. … The self-designed car fielded by Austin Kirkpatrick of Ocala, Fla., drew plenty of attention from pit-area observers as it rolled to the pre-race tech line. It boasts a distinct “twist” in its body that gives it a unique look. … Johnny Scott of Las Cruces, N.M., is making his first start in a new Longhorn Chassis. He moves into the Longhorn camp alongside his twin brother and Ranch Milagro Racing teammate, Stormy, who began driving machines from the North Carolina chassis builder last year. … Scott Bloomquist of Mooresburg, Tenn., will start at the rear of a heat race in his new Team Zero car because he’s excluded from participating in time trials after missing pre-race tech and registration due to his late arrival. He pulled his hauler into the pit area around 6 p.m., well after the completion of the drivers’ meeting. ... John Baker of Norman Park, Ga., didn't get a time trial lap after losing a driveshaft.

Wednesday's unusual format — on a night when drivers accrue points for time trials, heats, consolations and 25-lap preliminary features — brought plenty of questions from drivers for race director Erik Grigsby for the split-field program. Each group will run four heats with a four-car inversion. Five cars apiece transfer from the heats with the top two getting their times back. Of the remaining 12 transferring drivers, the two quickest also get their times back. Those 10 drivers will start straightup in the first five rows of the prelim with rows 6-10 made up of transfers by finish. ... Four drivers from the consolation start in rows 11-12. ... The format guarantees the two quickest qualifiers will start on the front row of the feature provides they finishes fifth or better in the heat. ... Likewise, the slowest qualifier would start 10th at best even if he wins a heat races. ... Eldora promoter and general manager Roger Slack's voice cracked as he addressed the drivers' meeting, expressing thanks for driver's showing up to compete in the track's first full-spectator event since 2019. "It's just meant so much to us," Slack said, describing the hard work the track's staff crammed into such a short time between notice of setting a schedule and getting word from the state about full capacity. The event is a "culmination of a lot of hard work, a lot of stress" and will prove satisfying "to get your on the track in front of fans." ... The initial Groups A and B initially announced were modified, swapping four drivers from one group to the other.