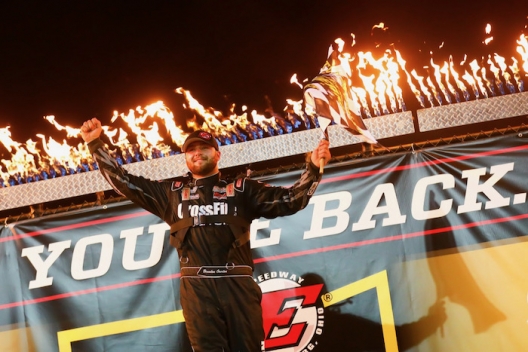 ROSSBURG, Ohio — Would Brandon Overton have overtaken Stormy Scott if the race-long leader hadn't climbed the turn-two wall with four laps remaining? We'll never know, and Overton was more interested in looking ahead then looking behind Wednesday night after his $10,000 split-field preliminary victory the night before Eldora Speedway's $127,000-to-win Dream XXVII.

Announcer Ben Shelton asked the Evans, Ga., driver in victory lane if he'd be able to park his No. 76 Longhorn on the victory stage Thursday, too.

"I sure hope so," the fourth-starting Overton said after leading the final four laps. "I do pretty good on these prelims. I can't win the big one. There's a lot of tough cars here. This A group tonight is stacked ... any guy out there could've won that feature."

Overton took the checkers 2.106 seconds ahead of Kyle Bronson of Brandon, Fla., while eighth-starting Chad Simpson of Mount Vernon, Iowa, rallied to a third-place finish in the 25-lapper. Ricky Weiss of Headingley, Manitoba, and Chris Ferguson of Mount Holly, N.C., rounded out the top five finishers.

Darrell Lanigan of Union, Ky., restarted fifth on lap 21 but got into the backstretch wall and bent a right-front shock, then had injury added to insult when his car suffered a bit more damage from contact as he retired to the pits.

Scott jumped into a comfortable lead from his position and cruised until entering lapped traffic with Bronson challenging before Overton slipped into the second spot just before a lap-12 caution flew for a slowing Hudson O'Neal.

On the restart, Scott kept Overton in check for several laps, but the margin narrowed with five laps remaining and the race's drama ended when Scott got too high between turns one and two with the wall eventually swallowing the leader's car.

Watching the track's video board in turn two, Scott knew Overton was hot on his heels.

"That one lap, I was watching the screen and when I looked back down and when I went to turn in, I turned in a split second too late from what I had been," said Scott, the group's fast qualifier. "It was just enough to get the right front in the fluff and it just shot me in the wall.”

Overton, the winner of a 2017 Dream prelim, wasn't sure he'd have overtaken Scott otherwise, but it didn't matter.

"Stormy was doing a helluva job. It is what it is. I sure would've like to have raced it out," Overton said. "This thing was awfully good tonight, you know. I didn't really have to rely on the cushion and that's the way I like it. Just hat's off to my crew. They've been busting their butts. We've got a helluva team. I can thank (car owners) David and Eric (Wells) enough for what they've done for me."

The winner was pleased with his car's performance in conservatively using a Hoosier LM-40 tire on the right-rear corner — a strategy employed more to see how the car might perform during a 100-lapper.

"We bolted this hard tire on here and that's usually when I kind of slow down a little bit," Overton said. " We've just gotta keep working on it. We're getting it. We've had a good year if we don't win another race. At the end of the day, I'm having fun, and I've got an awesome group of people behind me and I just want to keep it rolling."

Bronson wasn't fast enough to challenge Overton in the closing laps, but he was pleased with a runner-up finish in his Wayne Hammond-owned car.

"We just never tightened up all night long there. We qualified really good and I had a baseline here, and I was wanting to run it all night long," Bronson said. "Them guys was definitely better than us through the middle of the racetrack. We was kind of living on the top (groove) there and we was OK in the middle, I just had to slow down way too much (in that groove)  to run like I needed to.

"We'll work on it a little bit tomorrow and hopefully get a little tighter and have a chance at $125,000. It'd be awesome."

Simpson piloted his Moring Motorsports ride to the podium after he gained four positions on the very first lap and never dropped out the top five. He grabbed third on the final restart.

"Larry (Moring) gets me a good piece here and I've just gotta thank him," Simpson said. "He's not with us this weekend and I'll say hi to him back home and appreciate everything he does for me. Ronnie Stuckey and everybody with Black Diamond Chassis."

Group A fast qualifier Stormy Scott wasn’t happy with Tim McCreadie’s bold move on a late restart in the night’s first heat race that dropped him from third to fifth in the final two laps. But he didn’t hold it against McCreadie for making the move. “That’s how you got to drive at this place,” said Scott. “If you can get anything on a restart you gotta take it. That’s part of it.” Fortunately for Scott, dropping the two positions in his heat won’t cost him too much. He’ll still start on the pole of the night’s first feature just by finishing in a transfer position. ... When Heat 4 winner Darrell Lanigan was asked if his Club 29 Race Car felt as good to him as it did during his May 30 Johnny Appleseed Classic win at Eldora, he succinctly remarked, “It’s pretty good. We’ll see what we have.” … There were smiles all around in Kody Evans’s camp after the Camden, Ohio, driver held off Brandon Sheppard to finish second in Heat 4. It wasn’t an out-of-the-blue performance for Evans, though; he was strong in the Johnny Appleseed Classic, running fourth until a late restart scramble dropped him to seventh in the final rundown. … A team communication mixup sent Kyle Strickler from his scheduled pole position starting spot in Heat 2 to the rear of the field; he was late to line up for the prelim because he mistakenly thought he was in the third heat. Strickler’s troubles continued in a B-main when he was involved in turn-four tangle and dropped out several laps later. … Jimmy Mars was changed into street clothes shortly after the first heat’s completion due to his car’s right-rear damage from a slap of the wall. He said other mechanical problems, however, were more worrisome and potentially weekend-ending.

Former Dream and World 100 winner Shane Clanton of Zebulon, Ga., is hobbling around the pits with a broken bone in his left foot that he suffered in a slow-speed motorbike accident in the pit area during the recent Show-Me 100 weekend at Lucas Oil Speedway in Wheatland, Mo. His doctor put a brace on the injured foot and told him to stay off it as much as possible; he’s wearing a walking boot provided by his car owner, Greg Bruening, but will replace it with special side braces when he climbs in the car so he can work the brake. … Spencer Hughes of Meridian, Miss., is behind the wheel of Craig Sims’s PCC Motorsports Longhorn car after debuting with the team in last Friday night’s World of Outlaws event at Circle City Raceway in Indianapolis, Ind. Hughes and his two young crewmen have been working at Sims’s shop in Hope, Ind., since Memorial Day weekend. … Darrell Lanigan of Union, Ky., is driving the same Club 29 Race Car he piloted to victory in May 30’s Johnny Appleseed Classic at Eldora. The 2019-vintage machine — a vehicle Lanigan built and raced in ’19 on the WoO tour — is owned by Mississippi’s Randy Thompson, who is with Lanigan for Dream week. … Mason Zeigler of Chalk Hill, Pa., is debuting a new XR1 Rocket that he obtained from the Shinnston, W.Va., manufacturer after briefly running a Longhorn car for two weekends in May. … Freddie Carpenter of Parkersburg, W.Va., is running a Kryptonite frame that saw its first action last Saturday night at Atomic Speedway in Alma, Ohio. He’s added a new body since Saturday’s program. … Kyle Strickler of Mooresville, Ind., has a new look on the Team Zero car he purchased with his sponsors from Georgia’s Frank Ingram and debuted in the May 21-22 WoO doubleheader at Port Royal (Pa.) Speedway. Bright yellow lettering now accents the car, which is equipped with a Clements engine he also obtained from Ingram after experiencing a meltdown with the powerplant he used in May 30’s Johnny Appleseed Classic at Eldora.

Wednesday's unusual format — on a night when drivers accrue points for time trials, heats, consolations and 25-lap preliminary features — brought plenty of questions from drivers for race director Erik Grigsby for the split-field program. Each group will run four heats with a four-car inversion. Five cars apiece transfer from the heats with the top two getting their times back. Of the remaining 12 transferring drivers, the two quickest also get their times back. Those 10 drivers will start straightup in the first five rows of the prelim with rows 6-10 made up of transfers by finish. ... Four drivers from the consolation start in rows 11-12. ... The format guarantees the two quickest qualifiers will start on the front row of the feature provides they finishes fifth or better in the heat. ... Likewise, the slowest qualifier would start 10th at best even if he wins a heat races. ... Roger Slack's voice cracked as he addressed the drivers' meeting, expressing thanks for driver's showing up to compete in the track's first full-spectator event since 2019. "It's just meant so much to us," Slack said, describing the hard work the track's staff crammed into such a short time between notice of setting a schedule and getting word from the state about full capacity. The event is a "culmination of a lot of hard work, a lot of stress" and will prove satisfying "to get your on the track in front of fans." ... The initial Groups A and B initially announced were modified, swapping four drivers from one group to the other.