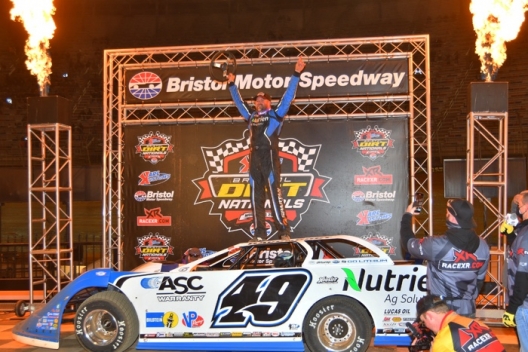 BRISTOL, Tenn. — When news broke in December that Bristol Motor Speedway would be covered in dirt for the first time in 20 years for the $50,000-to-win Karl Kustoms Bristol Dirt Nationals, Jonathan Davenport immediately began making plans to compete in the unsanctioned Super Late Model event even though he knew it would likely mean giving up on earning his fourth Lucas Oil Late Model Dirt Series championship this season due to the national tour’s conflicting race dates.

Davenport, the 37-year-old racer from Blairsville, Ga., never wavered from that decision and was rewarded for it Saturday night.

Charging forward from his 10th starting spot, Davenport of Blairsville, Ga., took the lead from Kyle Larson of Elk Grove, Calif., midway through Saturday’s Bristol Dirt Nationals finale at the high-speed half-mile oval and cruised to a $50,000 victory in the 40-lap feature.

“This ranks right up with the World 100,” said Davenport, whose decorated Late Model career includes three victories in Eldora Speedway’s prestigious World 100 to go along with his Lucas Oil titles and numerous other crown jewel victories. “We’ve had this event circled on our calendar for a really long time. We’ve pretty much given up a chance to run for a Lucas Oil title this year to be able to come here and run this event. It definitely means a lot to me to make the right decision and have it pay off the way that it did.”

While Davenport had confidence that his decision to essentially give up chasing a Lucas Oil title in order to race at Bristol would turn out to be the right one, the positive outcome wasn’t certain for much of the night. A subpar effort during Saturday’s prelims put Davenport in 10th for the start of the race, and for the first 10 laps, he didn’t make much headway forward.

But Davenport found his groove as the race entered its middle stages and rallied into the top five by the time the race’s third caution waved on lap 17. He took full advantage of the ensuing restart, ducking low on the front straightaway to roar by early-leader Chris Ferguson of Mount Holly, N.C.,  and Frank Ingram of Woodstock, Ga., in moving from fifth to third with a three-wide pass.

Davenport overtook Scott Bloomquist of Mooresburg, Tenn., for second on the race’s final restart two laps later and quickly chased down Larson before streaking by the NASCAR star on lap 21 to take the lead. Davenport was unheeded the remaining distance, pulling to nearly a straightaway advantage as the race ran caution free to the finish.

“I was so good getting into turn one on the bottom. I could run wide open all the way to the center and steer and pretty much go wherever I needed to,” Davenport said in praising his the Double L Motorsports Longhorn Chassis. “That hole right off of two would really upset my car, but I could hug right around the durttles and still be really, really good.”

Settling for a runner-up finish for the second straight night at Bristol, Larson crossed the finish line 3.496 seconds behind Davenport after turning back challenges from Bloomquist, who finished third. Bobby Pierce of Oakwood, Ill., finished fourth with Ingram rounding out the top five. Ferguson, who claimed a $10,000 victory in Friday’s tuneup event at Bristol, led the race’s first 10 laps before giving way to Larson on lap 11 and eventually falling back to seventh at the finish.

Davenport’s victory was an improvement of two spots from his finish in Friday’s opening night feature. After that third-place effort on Friday, Davenport was critical of the high-speed track surface that allowed for little passing in Friday’s 25-lap feature. He specially questioned officials decision to wet and rework the track directly before the Friday’s Super Late Model feature.

On Saturday, Davenport got his wish for a slower, slicker track surface.

“Last night, the last two laps, I ran wide open around one and two,” Davenport said. “You just can’t pass like that. We have to have slower speeds at a place like this to be able to maneuver around each other. If everybody runs wide open we’re just going to get in one lane and the only time anyone’s going pass is when we catch lapped cars.

“I think they did a phenomenal job of understand and seeing what they did wrong last night and knowing they didn’t need to do anything to the racetrack tonight.”

Racing at a NASCAR track, Davenport used a NASCAR connection to secure his victory. His teammate for the Bristol weekend, two-time NASCAR Cup Series champion Kyle Busch, had to start from the tail of a consolation race after missing qualifying and heat races while racing the NASCAR Truck Series in Atlanta. With a different tire combination than anyone else in the consolation race was running, Busch charged through the field to finish second and nearly win the 10-lap prelim.

Busch’s impressive run in his consolation race gave Davenport the confidence to go with the same tire combination on his car in the main event, and the moved paid off.

“In the B-Main with Kyle, we went a little bit harder on tire with him than the whole field did,” Davenport said. “I talked to him a little bit before he went out about why I felt like he was on the right tire and everyone else was on the wrong tire. He would be gaining speed and everyone else would be losing speed. It definitely made him look like a hero out there the way he came from the back.”

Larson agreed that Davenport’s tire choice played a large part in his dominance toward the end of the race. While he was disappointed to come up once spot short of a Bristol dirt victory for the second straight night, he was still pleased with his effort.

“Davenport was just a lot better than me,” said Larson, the NASCAR and dirt open-wheel star who began dabbling in Dirt Late Model racing late in the 2020 season. “They were on a harder compound. I think right-front and left-rear. He was just able to run harder and be gripped up. I kind of had to take care of my stuff. … He was just much better than me. Blew my doors off and put a straightaway on me pretty quick.

“Finishing second behind Jonathan with all the success he’s had is still awesome with me being a rookie really in Late Models.”

After quickly charging to second from his sixth starting spot, Bloomquist thought he had a car capable of winning the race before a series of cautions midway through and fading tires began to slow his pace.

“We fired up really good and got right up to second,” said Bloomquist, who was looking for his third career Bristol dirt victory after winning two Hav-A-Tampa Series races when the track was last covered in dirt in 2001. “Felt like we had it under control, but then we had those multiple cautions. We ran a little bit harder tire and the edges kind of came off of it. For whatever reason, it didn’t re-fire the more cautions we had. But all in all it was a fun night and a good night.”

Saturday’s 40-lap race was slowed by four cautions, all appearing between laps 13 and 19. None were for serious accidents.

Notes: Fourteen of the race’s 24 starters were running at the finish with eight cars on the lead lap. … After the first 13 laps ran caution free, David Payne of Murphy, N.C., brought out the first caution when he slowed with frontend damage. … Michael Chilton of Salvisa, Ky., spun in turn four to draw a lap-17 yellow. … G.R. Smith of Cornelius, N.C., spun and slid into the turn four wall. … The final caution on lap 19 was for Brian Nuttall Jr. of Claxton, Ga., who tagged he wall and slow in turn two. …  The event included racing for eight divisions, including a $7,500 Crate Late Model main event won by Austin Dillon on Saturday and Friday’s $5,000-to-win 602 Crate Late Model feature won by Cass Fowler. … Seventh-starting Brandon Overton of Evans, Ga., was never a factor in fading to a 23rd-place finish. … Jensen Ford of Johnson City, Tenn., was up to fifth from his 12th starting spot when steering issues forced him to retire.