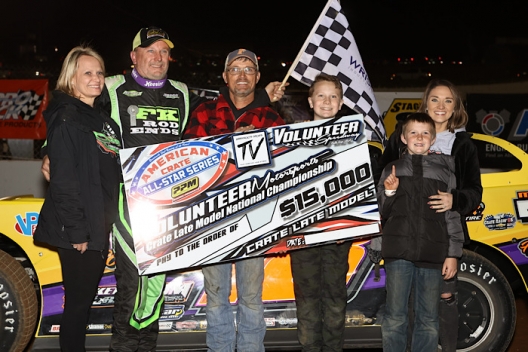 BULLS GAP, Tenn. — He may be a national touring veteran with victories in nearly ever Dirt Late Model crown jewel event, but Jimmy Owens still enjoys coming home. He enjoys winning at home too.

Owens, the 48-year-old Dirt Late Model superstar who earlier this season wrapped up his fourth Lucas Oil Late Model Dirt Series championship, made the most of a rare opportunity to race in front of his home crowd by claiming a $15,000 victory in Saturday’s finale for the inaugural Crate Late Model National Championship at Volunteer Speedway.

Making a guest appearance in Michael Lloyd’s No. 18 car, Owens of nearby Newport, Tenn. advanced from his 10th starting spot to take the lead from polesitter Ricky Weiss of Headingley, Manitoba, on lap 30 and commanded the remaining distance of the 100-lap American Crate All-Star Series series non-points event to win by final advantage of 3.067 seconds.

“It’s really awesome getting to race here at Volunteer Speedway this weekend in front of the home crowd that’s been a big part of my racing since the beginning and supported me through the years,” said Owens, a former open-wheel modified standout who cut his teeth at east Tennessee dirt tracks like Volunteer before bursting onto Late Model’s national scene over a decade ago. “With racing nowadays taking me all around the country with the Lucas Oil Late Model Dirt Series and big races we run, you still just never forget people you grew up around at the racetrack. I’ve enjoyed running this event because it’s just a special feeling to talk with people in the pits that you don’t get to see like you once did.”

Weiss, who claimed a $5,000 victory in Friday’s weekend opener at Volunteer, took the lead from Ford on lap three and held the point until Owens went by on lap 30. Weiss was still second when the race went back green following a lap-50 fuel stop, but he slowed two laps later with a broken shock and retired from the event. Weiss’s demise gave the second spot to Roberson, who held it until Welshan overtook him on lap 62.

After wrapping up his season behind the wheel of his No. 20 Ramirez Motorsports Rocket at The Dirt Track at Charlotte’s Last Call event Nov. 4-5, Owens wasn’t planning to compete in Volunteer’s mega-event for Crate Late Models until a call from fellow Lucas Oil Series regular Kyle Bronson led to Owens driving Lloyd’s machine. He used Friday’s weekend opener as a chance to adjust to the car’s under-powered Crate engine before making the most of the opportunity on Saturday night.

“I didn’t really have plans to run this event, but (Bronson) called and said another racer, Michael Lloyd, had a car he wanted me to drive,” Owens said. “Kyle brought it up from Florida in his hauler along with his car and we practiced Thursday to get a feel of driving it, because these crate (engine) cars don’t have nowhere near the horsepower like (Super Late Models). I got pretty comfortable with the car and we ran pretty well last night in the $5,000 race and learned a lot about what my crew and I needed do to be better tonight.

“All in all this has been a really fun weekend of racing here close to home in my own backyard. I appreciate the guys bringing the car up for me to race. What a year it’s been with COVID-19 halting racing for a couple of months, and then once we do get cranked back up we have a great season and win our fourth Lucas Oil Late Model Dirt Series championship and now this weekend. It’s just a really cool deal to be able say we won this $15,000 Crate Late Model National Championship event.”

Notes: Owens earned his 19th overall victory of the season. … The $15,000 payday is tied for the second highest paying victory of the season for Owens behind his $40,000 Topless 100 victory at Batesville (Ark.) Motor Speedway in August and equal to his win in June’s Clash at the Mag at Magnolia Motor Speedway in Columbus, Miss. … Saturday’s 64-car field was down 10 cars from Friday’s 74 entries. In all 12 states along with Canada were represented at the event. … There were only two cautions during the race the than the lap-50 break for fuel. The first caution was the lap-52 yellow for Weiss’s suspension troubles. The second caution appeared on lap 61 when Bradley Lewelling slowed with a flat left-rear tire.