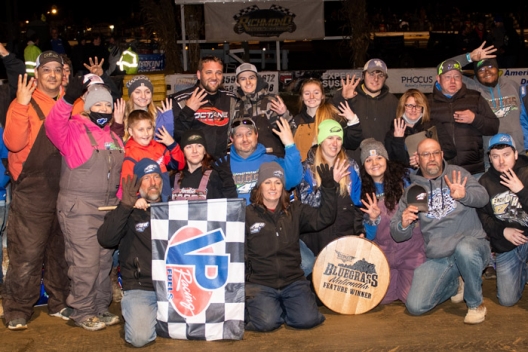 RICHMOND, Ky. — Zack Dohm gave a nod to longtime racing friend Jackie Boggs by carrying a look-alike graphics scheme at Richmond Raceway. Then the Cross Lanes, W.Va., driver paid an emotional tribute to the late Kentucky racer with a dominating $10,000 victory in the Bluegrass Nationals on the Ultimate Heart of America Series.

On the day the 51-year-old Boggs was laid to rest, the top three knew it was a fitting finish to have a white No. 4B car take the checkers in a late-season Kentucky event.

“It means a lot, you know,” the pole-starting Dohm said after leading 50 laps, his voice cracking in victory lane. “Jackie, he taught me so much, and he was like that with everybody. It didn’t matter who it was. He wanted to teach you the right way to do it. It’s been a rough couple of days for all these guys, and maybe this day might make it a little bit better for ’em.”

Dohm kept his pursuers in check throughout, including runner-up Dustin Linville’s late high-side charge. Linville, of Bryantsville, Ky., finished several lengths back in second with Scott James of Bright, Ind., who held the second spot from laps 27-39, settling for third. Devin Gilpin of Columbus, Ind., and Tyler Carpenter of Parkersburg, W.Va., who also used the No. 4B of Boggs, rounded out the top five.

Dohm got the jump on fellow front-row starter Freddie Carpenter at the outside and deftly handled a stiff challenge among lapped cars after a dozen laps with Carpenter, Linville, James and Gilpin mixing it up behind him.

Dohm edged away to a three-second lead that was erased by a lap-17 yellow, but he continued to make the right moves in traffic the rest of the way to remain in control.

“It felt like I was getting through (lapped traffic) pretty good. (Crew chief and brother) Nick (Dohm) was showing me I had a pretty decent lead — he could’ve been lying to me just to keep me calm — but it felt like I was getting through ’em pretty good,” Dohm said. “I almost swore it was rubbered up on the top (in turn three and four). I couldn’t make myself move. It just worked out, you know. I could feel my car taking a worse bounce down here in (turns) one and two on that bottom, but it didn’t feel no good up high. I don’t know. By the grace of God we made it through there — we probably had a little bit of help from Jackie, I’d say.”

Linville, who ran second the final 10 laps and a fellow Swartz Race Car driver with Boggs along with Dohm for many seasons, was proud to run behind the winner on a special night.

“Any time you second to that guy right there, he’s been pretty dominant this year. And we’ve been pretty sucky to be honest. It feels pretty good, actually to be out here talking on the microphone,” Linville said. “Me and (Dohm), pretty much (Boggs) was our mentor in racing, and we lost him (last) weekend. I was telling my wife when we was coming back from the funeral today, (how could it be better) than for me and him to run 1-2, whether he won or I won. He’s a good friend of mine and we owe a lot of our racing careers to Jackie Boggs. I think he’s smiling down on his. I think he’d like that one.”

James had designs on tracking Dohm down when he got into second past halfway, but he struggled in the race’s late stages.

“We got to second there, actually I was catching Zack a little bit there … just that lap-39 caution, the tire sealed up,” James said. “I felt like we were locked into second there. (Dohm) had the best car, so the right car won the race.

“It’s a tribute to Jackie. We’re all going to miss him and (Dohm) and Jackie were close, and he ran Swartz (Race) Cars) forever, and the 4B wrap, it’s a special night. It’s a tough day for the racing community to lose a hard racer like Jackie. He was a true outlaw. I just want everybody to say a prayer for the Boggs family tonight. I’m sure Jackie’s up there smiling right now.”

The feature was slowed by four cautions, the most serious incident coming on the 17th lap for a four-car pileup in entering turn three (Tommy Bailey, Steve Smith, Greg Johnson and Cory Brock were involved).

Smith slowed for another caution on lap 26 and retired while Tyrel Todd drew the third yellow when he got into an infield tire barrier in turn four on the 40th lap. The final yellow fell on lap 48 for Cory Brock’s flat tire.

Notes: Dohm’s 2020 victories include two other Richmond specials, one on the UHofA circuit and the other with the Southern All Stars. … Children were invited onto the frontstretch for a Halloween costume contest from 9:30 to 10:05 p.m. … The feature started about 10:30 p.m. … Spectators donated $3,270 to the Jackie Boggs family. The standout second-generation Kentucky racer died eight days earlier. … Joe Godsey drove the C.J. Rayburn house car.