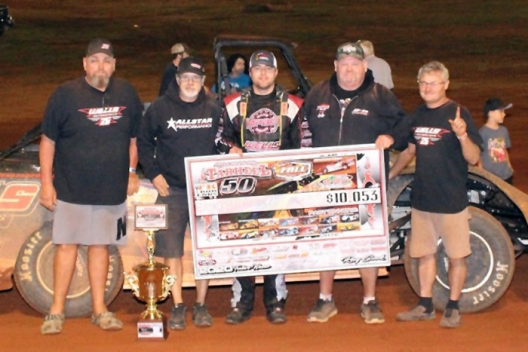 BRASSTOWN, N.C. — There’s making a move in lapped traffic. Then there’s threading the needle with a frontstretch pass between the leader and a slower car. And that’s what pole-starting Brandon Overton of Evans, Ga., pulled off Thursday at Tri-County Racetrack en route to a victory in the FK Rod Ends Tar Heel 50.

Chasing fellow Georgian and fellow front-row starter Shane Clanton for 44 laps, Overton made his dazzling, winning move on the 45th circuit and led the rest of the 53-lap main event for a $10,000 payday and his fifth career Schaeffer's Fall Nationals victory.

The Wells and Sons Motorsports driver credited patience with helping him win the Battle of Georgia on the tight 3/8-mile oval in the far western corner of North Carolina.

“I just calmed myself back down because, you think it’s fast around here, but the race is pretty slow as far as, you can’t run 53 laps wide open around here,” said Overton, who won the biggest race at the Ray Cook-promoted track for the second straight season. “You’ll fade really fast. So you just gotta kind of pace yourself and pace yourself and wait for the opportunity to come.”

Overton made the most of the opportunity and pulled away to win by 1.695 seconds. Clanton, of Zebulon, Ga., held off a third Georgian — Dale McDowell of Chickamauga — for the runner-up spot while Ricky Weiss of Headingley, Manitoba, and a fifth Georgia, Donald McIntosh of Dawsonville, rounded out the top five.

Local standout and previous race winner David Payne of Murphy, N.C., held the third spot most of the way, but he ended up with extensive rear deck damage after a lap-32 caution and struggled the rest of the way, settling for eighth.

Clanton got the jump over his fellow Georgians at the outset and led mostly comfortably, avoiding a couple of Overton’s bids for the lead amid traffic. The race-long leader edged away from Overton again after the last of five cautions on the 32nd lap, but a dozen laps later Overton was turning up the heat as Clanton tried to put a lap on Matthew Nance, the Ronda, N.C., driver debuting the Rum Runner Racing ride.

Clanton slid under Nance in turn two, but Nance crossed under the leader, who drove too hard into turn three and slipped over the turn-four cushion. Overton pounced, squeezing between the cars of Clanton and Nance and heading into turn one with a lead he’d never give up.

The lapped cars “were just all over the place there. The bottom’s so greasy, and you tried to go under ’em and you slide into ’em and this and that,” Clanton said. “Our car was pretty good. The caution saved me one or two times, but it didn’t save me the last time when I needed to keep the lead there.

“I seen (Overton) under me two or three times there in lapped traffic. I said if I could just clear these cars before he does and (it doesn’t) slow me down and bide my time … I got around (Nance) and he raced me down the back straightaway and I jumped the berm over in (turns) three and four, just got me a little flustered. He got by me. I was just trying to win a big race here toward the end of the year and just messed up.”

Overton figured Clanton would take command early, but he tried to calmly stick to his strategy.

“It’s so hard to take off in the bottom here. That initial start, the outside guy’s always got it,” Overton said. “I figured he was going to beat me off of (turn) two over there (on the first lap) so I just tried to stay (within one car) and stay as close to him as I could and wait on him to make a mistake. Hell, I didn’t think he (would make a mistake).

“I never could get him in traffic. The way you have to slide everybody here really chews up your right-rear tires, and (Chris) Madden beat me a couple of months ago over here, and that’s what I did, I hurt my tire really bad. (Tonight) I just wanted to stay just as close to him as I could and hopefully he’d mess up.”

None of the five yellow flags were for serious incidents.

Craig Greer retired on the eighth lap for the first yellow and Kenny Collins stopped a lap later. Kip Cochran drew a lap-18 yellow when he stopped between turns three and four. John Eller stopped for a lap-32 yellow. The final caution fell just after the lap-32 restart for Will Roland.