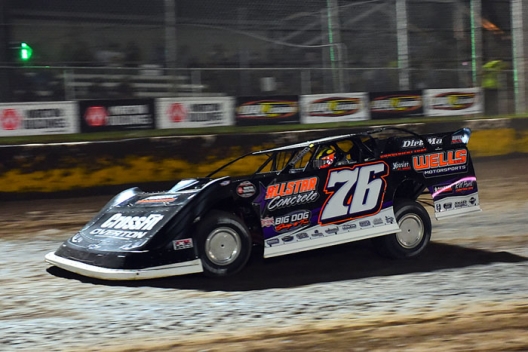 Adding another flourish to what is rapidly becoming the best campaign of his career, the 29-year-old standout from Evans, Ga., rolled off the pole position to lead every lap in Thursday’s 30-lap feature that kicked off the 33rd USA Nationals weekend at Cedar Lake Speedway.

“I told them when we won, ‘Well, we got us an Outlaw win,’ ” Overton said after his latest conquest pushed his checkered flag total to 16 in his first full year driving for David Wells. “I got three Lucas (Oil Late Model Dirt Series) wins I think but I hadn’t won an Outlaw race, so it’s pretty cool deal to do it in Wisconsin.

“I’m having so much fun racing right now, it feels good,” he added. “I’m not stressed out, I got a good crew, good cars, good engines. Everything’s there, and I just got to put the puzzle together.”

The $6,000 triumph was Overton’s first-ever at the 3/8-mile Cedar Lake oval, the eighth of his career and WoO competition and came in his first appearance since he clinched the Schaeffer’s Southern Nationals points title on July 25. He was virtually flawless on his way to victory lane, never feeling serious pressure as he controlled the entire distance and beat Jimmy Owens of Newport, Tenn., to the finish line by 1.980 seconds.

Tyler Erb of New Waverly, Texas, finished third after briefly overtaking Owens for second for laps 16-18. Five-time USA Nationals winner Billy Moyer of Batesville, Ark., placed fourth after making a last-lap pass of Winfield, Tenn.’s Mike Marlar, who had grabbed the spot from Moyer on lap 20 but was forced to settle for fifth.

Sixth-place Cade Dillard of Robeline, La., was the first WoO regular across the finish line while runaway series points leader Brandon Sheppard of New Berlin, Ill., was a quiet ninth after starting 12th.

Overton, whose best finish in eight previous WoO starts this season was second on lap March 6 at Duck River Raceway Park in Wheel, Tenn., ended the evening with his spirits riding high heading into Friday’s double-heat qualifying program for Saturday’s 100-lap, $50,000-to-win USA Nationals. He could scarcely have been more pleased with the performance of his Longhorn Race Car.

“I felt real good,” said Overton, who joined Owens, Sheppard and Josh Richards of Shinnston, W.Va., as drivers who have won WoO and Lucas Oil Series events in 2020. “I was probably driving a little harder than I should. A couple times I felt like if I slowed down entering (turn) one I ran through there better. I knew, tonight, when we qualified, I said, ‘Man, that one and two is gonna be juicy for awhile,’ so I really wasn’t worried about that end. I was worried about the slicker end (in three and four), and I felt like I did pretty good down there.”

The only stretch of the race when it appeared Overton might be vulnerable was as the halfway mark neared and he was negotiating lapped traffic. His steady edge on the third-starting Owens of just over 1 second shrank ever-so-slightly until he realized there was a faster groove he needed to run and a lap-15 caution flag allowed him to run it on open track.

“I seen him,” said Overton, noting how he could look at the large video board between turns one and two to catch a glimpse of Owens pursuing him. “I was wanting to move up (to the outside where Owens was running), but I didn’t want to get up there and burn my tires up because I don’t race on these things (Hoosier LM tires) much. I don’t know what they’re gonna do. We were on 30s (compound rubber), and we usually runs 20s or 40s. We never run a 30.

“I seen him coming, and I seen my stick guy closing the sticks. I knew they weren’t making time on me down there (in turns three and four), I knew it was gonna be down here (in one and two), and Boom (Briggs) is the one who kind of showed me where to be. I passed Boom (to lap the Bear Lake, Pa., driver) in the middle and then he kind of rolled back to me (on the outside), and then I knew (the faster lane) was up there. When we had that caution (on lap 15) they told me to get up there and I was all right then.”

Overton the new green on lap 15 and subsequent restarts on laps 16 and 18 with aplomb. He extended his edge to over 2 seconds — nearly a full straightaway — in the closing circuits as Owens simply couldn’t keep pace.

While Owens, 48, acknowledged that he hated to see the lap-15 caution flag fly, his Ramirez Motorsports XR1 Rocket was a runner-up car on this occasion.

“It didn’t do us any favor,” Owens said of the caution that dulled his momentum. “But Brandon had a great car tonight and we just missed it a little bit. Maybe we can dial it in and do a lot better tomorrow.”

The 23-year-old Erb, meanwhile, wasn’t able to hold back Owens after slipping by the Lucas Oil Series points leader and 2014 USA Nationals winner for second on the lap-15 restart. He maintained the position on the lap-16 restart but gave it up when the green flag flew two circuits later.

“Jimmy got by me (at the initial start) and then on one of the restarts I was able to get back by him,” said Erb, who started from the outside pole. “But when you get your tires hot here you got three hard laps you can really run up against that cushion and then you kind of got to slow down and make the best lap.”

The race’s three caution flags were triggered by Nick Anvelink of Bonduel, Wis., who slowed on lap 15; Chase Junghans of Manhattan, Kan., who spun in turn four on lap 16; and Kyle Strickler of Mooresville, N.C., who slowed in turn two on lap 18.

The 10-minute horn to line up the 30-lap feature's field was blown by WoO officials at 8:56 p.m. ... Brandon Overton starts the A-main from the pole position after a convincing heat-race victory. His superb 2020 season in David Wells’s machine does not yet include a World of Outlaws triumph. … The top-three drivers in the country — Overton, Brandon Sheppard and Jimmy Owens — are racing together for the first time since Overton won June 13’s Lucas Oil Late Model Dirt Series event at Smoky Mountain Speedway in Maryville, Tenn., over Sheppard and Owens. … Tyler Erb won the fourth heat after surviving an opening-lap scrape with Ryan Gustin, whose spun in turn four from contact with Erb. Gustin’s car was hit hard in its right-rear corner by Jason Papich; Gustin was finished for the night while Papich continued in the heat but didn’t run the B-main. … Ashton Winger, who scored his first-ever WoO win on July 3 at Cedar Lake, pulled out of his heat race after bicycling and nearly flipping in turns three and four. He will start the feature using an emergency provisional. … Chase Junghans and Scott Bloomquist fell back on WoO provisionals to gain entry to the feature after struggling in prelims. … Derek Nelson won the caution-free 20-lap USRA Late Model feature for his first-ever triumph at Cedar Lake.

Thursday’s action features the customary series format of time trials, heat races and B-mains to set the field for the headline event, which offers full points toward the national tour’s championship battle.

The USA Nationals competition continues on Friday night with a double-heat format in place for the third straight year. No time trials will be run; drivers will draw for starting positions and transfers to Saturday’s 100-lap, $50,000-to-win headliner will be determined by accumulated passing points.