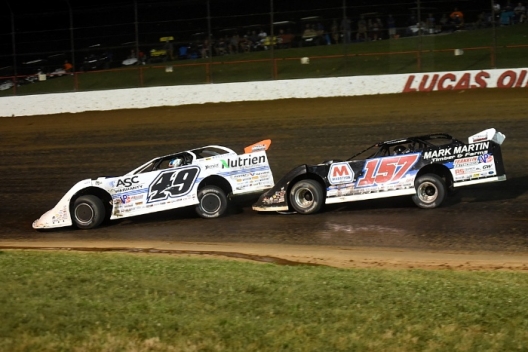 WHEATLAND, Ill. — Pole-starting Jonathan Davenport took the checkered flag first in Sunday’s CMH Diamond Nationals finale at Lucas Oil Speedway, but it was another flag — a yellow on lap 52 — that helped him to victory lane.

The slowdown with eight laps remaining allowed the Blairsville, Ga., driver to stay out front after a charging Mike Marlar had pulled alongside in a tight battle for the lead of the $15,000-to-win Lucas Oil Late Model Dirt Series event.

Davenport kept Marlar in check the rest of the way, extending his Lucas Oil Late Model Dirt Series points lead with his series-leading ninth victory of the season while Marlar finished a scant three-tenths of a second behind.

“I guess that caution did save us,” Davenport admitted in victory lane while the 10th-starting Marlar of Winfield, Tenn., could only shake his head about the "pass of the night” being erased at the slick 3/8-mile oval.

Shanon Buckingham of Morristown, Tenn., improved six positions to finished third while outside front-row starter Tim McCreadie of Watertown, N.Y., who led the first 10 laps before giving way to Davenport, was fourth. Hall of Famer Billy Moyer of Batesville, Ark., rounded out the top five finishers as the national tour wrapped up the two-race weekend.

Not among the frontrunners at the finish was Jimmy Owens of Newport, Tenn., who was looking for his third straight series victory. Saturday's Wheatland winner was running third when he spun on the 41st lap to fall from contention.

Davenport appeared to have the race under control past the halfway point while Marlar, McCreadie, Buckingham and Scott Bloomquist were among drivers battling among the top five. But after Marlar got by McCreadie on lap 45 following a restart, he began stalking the leader. With Davenport on the inside groove, Marlar rolled around the middle of the track to set up a winning pass that was all for naught when Tyler Erb spun on lap 53.

“The racetrack really moved around right there at the very end. I think it cleaned up and started picking up grip getting into the corner and down the straightaway, so I’d almost overshoot the corner once I moved to the bottom,” Davenport said. “But my line kept going away in the top, and I knew it would, so I just hung in there as long as I could.

Davenport was glad to get his team back on track after struggling most of a four-race stretch split between Tri-City Speedway in Granite City, Ill., and Wheatland, with a pair of back-in-the-pack finishes at Tri-City before finishing fifth at Lucas Oil Speedway in Saturday’s Diamond Nationals opener.

“We finally got some speed back in this thing,” the reigning series champion said. “We put our heads together last night before that feature and made this thing a whole lot better, and it just parlayed over into today and it was really superb.”

He hopes the victory builds momentum during a busy stretch of racing that continues Tuesday at Brown County Speedway in Aberdeen, S.D.

Marlar was smiling in victory lane, in part because he knew he had a car that could’ve won the race.

“I had the pass of the night made right there when (the caution appeared), and that set me back pretty good. But, heck, you know what, as much as I’d want to whine about that, I got paid to drive a race car today, so things aren’t too bad,” he said. “I really enjoy coming out here, man. It’s just an awesome facility, an awesome crowd, just everything, there’s a lot of electricity here. It’s fun coming here and I enjoy coming out, and we had an awesome weekend.”

Buckingham posted his second-best Lucas Oil Series finish of the season in coming from ninth to third.

“For whatever reason, (the track) just suits my driving style. I like the slow and slick and being patient and finesse driving — I think that’s where we shine,” he said. “Man, my crew worked theirselves to death. J.C. (Crockett) sat in there on the (spring) smasher and shock dyno all day for the last two days, and he’s finally come up with something that really works well for us. So man, I’m tickled to death. I know it’s not a win, but I’m probably more excited than Jonathan is.”

Like Marlar, Buckingham’s car got better deeper into the feature.

“I’m glad it’s that way. Some (races) through the season we’ve been good early and then seems like we fade. I’m really happy to have a car that seems to keep coming and coming, but those restarts were just killing me,” he said. “I think if we could’ve had those last 19 (laps) all green flag, I think I could really gotten up there and raced with those guys. I was so bad on the restarts I’d have to fend off whoever was behind me for a lap or two and then get going. … It was a lot of fun to come on at the end.”

Notes: Davenport tallied his 44th career Lucas Oil Series victory, one behind third-place Don O’Neal on the all-time list. … Five cautions slowed the action, including for the lap-41 yellow for Owens. The others came when Hudson O’Neal ended up against the wall between turns one and two on the 15th lap, on lap 29 for a slowing Tony Jackson Jr., on lap 44 for Austin Siebert’s turn-two spin and on lap 52 for Tyler Erb’s spin. … After winning a consolation race in his regular No. 94, Austin Rettig starting and parking Mason Oberkramer’s No. 93 in the main event. … In the second heat, Michael Norris, Gavin Landers and Billy Moyer Jr. tangled in turn three, with Landers and Norris getting the worst of the damage. Norris, who is substituting for an ailing Don O’Neal in a Clint Bowyer Race ride, was an early retiree after taking a provisional in the feature.