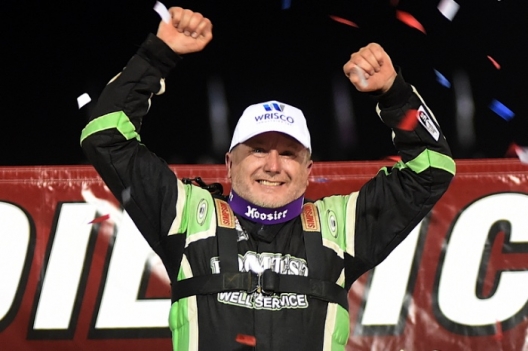 The 47-year-old driver from Newport, Tenn., continued his career-long success at the 3/8-mile showplace oval on the Lucas Oil Late Model Dirt Series, pulling away in the second half of Saturday’s 60-lap feature to collect a $15,000 victory, his second in row on the series and third of the season.

After getting his 10th career victory at the track in the 13th annual Diamond Nationals opener, Owens is eager for a chance at No. 11 less than 24 hours later.

“It’s awesome,” the fifth-starting Owens said. “The team’s pumped, we’re pumped, it’s a great feeling to be back in victory lane here.”

Owens took the checkers a straightaway ahead of Earl Pearson Jr. of Jacksonville Fla. — also a runner-up to Owens the previous night at Tri-City Speedway in Granite City, Ill. — while Mike Marlar of Winfield, Tenn., wrestled the third spot from Scott Bloomquist of Mooresburg, Tenn., in the final laps. Series points leader Jonathan Davenport of Blairsville, Ga., didn’t contend up front, but he rallied from his 13th starting spot to rebound from back-to-back nights of 16th or worse at Tri-City.

For Owens, it was another visit to a victory lane where he feels right at home. He has nine Lucas Oil Late Model Dirt Series victories at Lucas Oil Speedway, another on the Lucas Oil Midwest LateModel Racing Association (the sister series co-sanctioning the Diamond Nationals), and four victories apiece in the track’s biggest events, the Show-Me 100 and Diamond Nationals.

Bloomquist led the first 10 laps from the pole position, but Owens swept around on the 11th lap in the middle groove before settling into the low groove and pulling away.

A lap-20 caution allow the high-running Pearson to run side-by-side with Owens, and he slipped ahead to unofficially lead laps 24-25. But Owens stuck with his low groove, edged back ahead to lead comfortably at halfway, then wasn’t challenged the final 30 laps.

“We’re rolling really good right now,” Owens said. “We’re glad to be here, glad to get to race, a good win. (Car owner) Leon (Ramirez) and the guys are here. Glad we get to win in front of them.

“The crew’s worked their butts off the last few days,” he added. “We’re clicking real good … so maybe they’ll be a lot more of these.”

He was glad to see the final 40 laps of the race run caution-free.

“I didn’t want to see cautions, because we still struggles on the takeoffs and stuff, and getting our tires to fire back up,” the winner added. “But I think we’re getting a hold on that, too.”

Pearson did all he could to keep up with his longtime series buddy, but he ended up having his hands full with Bloomquist and Marlar.

“Everybody knows Jimmy’s extremely good here, I don’t know how many races he’s won,” said Pearson, who started alongside Bloomquist on the front row. “We tried to run with him there for 10 or 15 laps, whatever it was, but he could maneuver around a lot better than I could. But it was a good night for us, a good points night. Of course he won (last) night and we finished second, and we done it again tonight. We’ll work on it and try again tomorrow.”

Pearson added: “I couldn’t go through (lapped traffic) like Jimmy could, I couldn’t move around the racetrack like I wanted to. I just got too loose. I knew (Bloomquist and Marlar) were right there. Luckily we didn’t have any cautions or anything like that, so we’re proud of second. …”

Marlar used a new setup to come from his ninth starting spot and finish third.

“It wasn’t bad. This racetrack is really slick and slow. It was so fun to race on that. We did some stuff (suspensionwise) that was out of the ordinary, but man, it worked really good,” he said. “Congratulations to Jimmy there. He had an awesome race. He was good all night. And Scott there, I’m glad to see him back and doing so good. Me and Scott got to battle the whole race. Honestly, six months ago when he had that motorcycle wreck, I didn’t know if we’d ever get to do that again, so I’m very thankful to have him back.”

Notes: Owens won back-to-back Lucas Oil races for the first time since July 12 and July 15, 2014, at Lucas Oil Speedway and Lakeside Speedway in Kansas City, Kan. … The 63 career Lucas Oil victories for Owens are second on the all-time list to Bloomquist’s 93. … The race was slowed for a yellow on the initial start that left Stormy Scott facing the wrong way, and again on lap 20 when Devin Moran ducked into the pits for nosepiece repairs. … The series returned to Wheatland for the first time since storms cancelled the tour’s Show-Me 100 at the 3/8-mile oval. … The weekend includes former photographer Ron Mitchell's annual "Doors for a Cure" door panel auction on the hillside between the front gate and main grandstands. Last year’s auction raised $10,600 for the American Cancer Society.