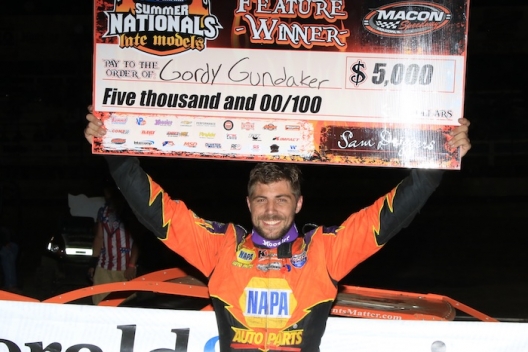 Just when it appeared Bobby Pierce of Oakwood, Ill., had scored his first DIRTcar Summer Nationals victory of the season, a yellow flag waved, bringing the 39th annual Herald & Review 100 back to the last completed lap. Edging ahead of Pierce out of turn four on the lap-99 restart, Gordy Gundaker of St. Charles, Mo., captured a $5,000 victory at the fifth-mile Illinois oval.

“The yellow was out and I didn’t know what the hell was going on,” Gundaker said. “I thought, ‘Man, I’ve got a good shot at this if I could just go make a good corner in (turns) one and two.’ I’d struggled down there all night. But if I could make a good corner, maybe Bobby (Pierce) would slip up and (I would) get him. It happened. That was insane. I couldn’t believe it coming off of (turn) four. I realized we had him beat.”

Running a close second to Shannon Babb of Moweaqua, Ill., for nearly the entire distance, Pierce slid ahead of the race-long leader as the pair worked through lapped traffic, grabbing the lead on lap 98. Making slight contact with Pierce in the battle out front, Babb slowed to draw a caution and retired his damaged No. 18 to the pit area. The race resumed only to be slowed again on the white-flag lap when Ryan Unzicker of El Paso, Ill., came to a stop on the backstretch.

While it looked as though Pierce had taken the checkers, series rules state that the leader plus one car must cross the line in order for a lap to be considered complete. With Pierce being the only car across the line when the caution fell, the race was backed up to the last completed circuit. As Unzicker’s car was towed from the track, the field realigned for a one-lap shootout to the finish.

It was on that final lap Gundaker made his move. Running side-by-side with Pierce down the backstretch, Gundaker pulled ahead out of the final corner, taking the checkered flag .221 seconds ahead of Pierce to score his second consecutive Summer Nationals victory at Macon.

“I wasn’t making very good laps down in one and two and I was just searching real bad,” Gundaker said of his move to the front of the field. “Once I kind of slowed down one time down there and made a good lap, I realized that I had something down there and if I could just slow up and make some good laps, I could get those guys.

“It’s better to be lucky than good every time. The yellow fell our way right there at the end and we took advantage of it. I think that was one for the record books.”

After nearly coming away with the victory, a cool-headed Pierce chalked the late-race sequence of events up to bad luck.

“It’s one of them bad timing deals, I guess,” Pierce said. “When it’s not your time to win, it’s not your time to win. It just goes with anything. I didn’t hear them say caution, so I was about damn near crossing the checkered flag. I had my hand out the window and by then I think my adrenaline had picked up. I don’t think it had really calmed down before we took the green flag again.

“I was pretty heated that we didn’t have a called race. But I also couldn’t get the thing into low gear, so I was hitting it and hitting it. Just things like that that make you not really as calm. I kind of went in turn one on that green flag with one to go and kind of went in there too calm. The car pushed a little bit because I didn’t charge the corner. I was being a little cautious. So it made a shove and by the time I got a little bit free, these Pierce cars don’t turn as far right as the Rocket cars do, and I needed just that little bit more.”

Lapped traffic would ultimately be the cause of Babb’s demise. As the five-time Herald & Review 100 winner split and slid ahead of lapped cars through mid points of the race, it was in those final laps that he was no longer able to hold off a charging Pierce.

“I knew I was going to have to do something,” Babb said. “I knew when I got to those two guys they were running right in our groove. They were hard to pass earlier when we got to them. Bobby (Pierce) was right there doing what he needed to do. He was ready to pounce. I killed my momentum getting into (turn) three. I was hoping the guy was going to hit the brakes and let me get up in front of him. But he just run me as hard as ever. Just a bad situation. It’s part of racing here at Macon.”

Charging around the high side, outside polesitter Ryan Unzicker took an early lead. It was a tight battle for second in the opening laps, with Gordy Gundaker and Taylor Scheffler closing in on polesitter Frank Heckenast Jr. With a lapped car slowing Gundaker’s just past halfway charge, Heckenast maintained the position. A yellow flag waved on lap eight when Phil Taylor spun in turn two. Using momentum from the restart, Gudndaker overtook Heckenast for second but his last-lap challenge of Unzicker came up short.

In a three-wide battle at the front of the field, Bobby Pierce pulled ahead of Brian Shirley and Allen Weisser to lead the opening lap. As Pierce stretched his lead in the early distance, Weisser raced door-to-door with Rusty Schlenk for third, recovering from a lap-two miscue in turns three and four. Dominating all 10 laps, Pierce won the heat, with Shirley running second. Weiss edged Schlenk at the line to finish third.

Rolling ahead of fellow front-row starter Dennis Erb Jr. out of turn four, outside polesitter Shannon Babb took an early lead. With the top two cars pulling away at the halfway mark, it was a side-by-side battle for fourth between Billy Hough and Jason Feger. A yellow flag flew on lap seven when Roben Huffman slowed in the top of turn four. Third-running Rusty Griffaw collided into Babb's left-rear on the ensuing restart, but Babb was able to maintain his lead through the remaining distance to win the heat. Erb finished second, with Feger overtaking Griffaw to run third.

Tripping the clock with a time of 10.623 seconds, Frank Heckenast Jr. was Thursday’s overall fast qualifier at Macon. He will start on the pole of the evening’s third heat race. Clocking quick time in their respective time trial groups, Dennis Erb Jr. and Brian Shirley join Heckenast as heat race polesitters.

After the first half of the week’s events were rained out, the DIRTcar Summer Nationals returns to action on Thursday at Macon (Ill.) Speedway. The fifth-mile oval hosts the series for the 21st consecutive season, with the annual Herald & Review 100 paying $5,000-to-win.

Gordy Gundaker of St. Charles, Mo., was the winner of last year’s series stop at Macon. While Bobby Pierce swept Hell Tour events at the Illinois oval in 2017 and ’16, Shannon Babb of Moweaqua, Ill., has an event-leading five career Herald & Review 100 victories.

The event is co-sanctioned by the Midwest Big 10 Series. Ryan Unzicker of El Paso, Ill., a former Herald & Review 100 winner, scored a Big 10 victory at Macon on May 27.

Thursday’s program will include hot laps, time trials, preliminary races and the 100-lap main event. The top two finishers from each heat race will run a six-lap dash to determine the first three rows of the feature lineup. Modifieds and pro modifieds will also be in action.