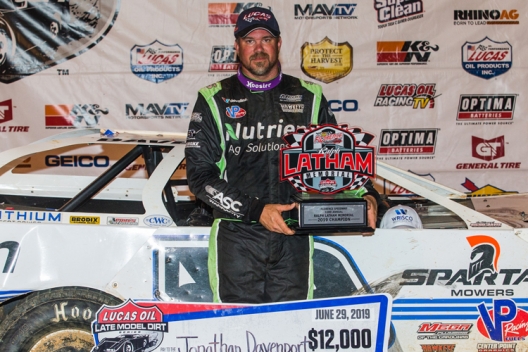 Just 24 hours after experiencing the rare occurrence of sitting on the sidelines as a race ended, Davenport roared back Saturday night with a convincing flag-to-flag victory in the caution-free 32nd annual Ralph Latham Memorial at Florence Speedway.

Davenport, 35, of Blairsville, Ga., burst off the outside pole pole at the initial green flag of the 50-lap feature to seize command from front-row mate Jimmy Owens of Newport, Tenn. The remainder of the distance belonged to Davenport, who turned back some periodic pressure from Owens to beat the 47-year-old driver by 0.663 of a second and claim the memorial race’s $12,000 top prize for the second time in his career.

And just like that, Davenport wiped away memories of his early retirement from the previous night’s Lucas Oil Series stop at Tazewell (Tenn.) Speedway.

“I had a good spot to watch (Tazewell’s A-main), that’s about all I can say,” said Davenport, who stood alongside his car in the infield of the high-banked Tazewell third-mile oval after dropping out on lap eight due to a broken j-bar and driveshaft in his Lance Landers-owned Longhorn machine. “It just sucked because I know we had a shot to win that race starting in the back (after a flat tire knocked him from the lead in his heat race). I just made a mistake — I was going too hard, too early (and smacked the wall to cause the broken components). I thought the rain was right on us and I was trying to get all I could at that time.”

What happened to Davenport at Tazewell motivated him at Florence, propelling him to his series-leading eighth triumph of 2019 and an even healthier points lead.

“I’ve been making a lot of mistakes here lately,” Davenport said, “so I wasn’t gonna give this one away.”

Davenport followed through, keeping Owens anywhere from nearly 3 seconds to less than a half-second behind him as the feature ran without interruption from start-to-finish. Hudson O’Neal of Martinsville, Ind., who won last year’s Ralph Latham Memorial when it was held in August, finished a late-charging third after starting 11th while third-starter Josh Richards of Shinnston, W.Va., place fourth and sixth-starter Mike Marlar of Winfield, Tenn., finished fifth after running fourth for laps 26-43.

The biggest scare for Davenport in an otherwise dominant performance came at the race’s original start. He was surprised that the feature began as quickly as it did after Florence’s track-prep crew reworked the surface during an intermission before the finale.

“I couldn’t really believe we went green right there off the bat,” Davenport said. “I figured he’d give us a couple laps because I had no clue where to go (on the racetrack). I knew Jimmy would be right under me so I tried to give him enough room, but I didn’t want to go all the way to the top in case it was still greasy up there (after the track reconditioning). I didn’t want to ruin our night before it got started.”

Owens stayed within striking distance of Davenport throughout much of the race’s first half, but Davenport’s edge swelled to nearly 3 seconds during the middle to late stages. Dealing with lapped traffic in the final circuits shrunk Davenport’s winning margin under 1 second.

“I got riding for awhile and I could never make up no time on them lapped cars,” Davenport said. “Once we got going there early I just tried to not spin my tires. I knew how bad this place was on tires in the heat races and the B-mains, so I was trying to save it for later, just trying to keep Jimmy at bay there. I knew he was really close, I could see him under me, but then I figured once we had a long green-flag run maybe I’d saved my tires better than him.”

That was proven in the affirmative for Davenport, who deflected credit for his bounce-back checkered flag to his Double L Racing team members.

“I gotta thank my crew,” Davenport said. “I made a mistake last night. I tore the s— out of this thing. The guys worked hard and put it all back together and we’re just happy to be back in victory lane.”

Owens also praised his crew members for the work they put in to get his XR1 Rocket car pointed toward a runner-up finish, his first bridesmaid run on this season’s Lucas Oil Series.

“The guys have busted their butts all day,” said Owens, who has won victory this year on the Lucas Oil tour. “It was rough night last night at Tazewell, tore up a bunch of stuff. They got the car fixed, and out of the heat race we had to change some things … had to rebuild everything out of the qualifying, actually.

“I thought we was gonna be able to get the Ramirez-Reese Motorsports car up front, but we couldn’t do it.”

The 18-year-old O’Neal, meanwhile, fell short of a second straight Ralph Latham Memorial triumph, but he didn’t go down quietly. He made an impeccable advance from his starting spot inside the sixth row during the race’s second half, going from seventh place at lap 25 to fifth on lap 34 (passing Tyler Erb of New Waverly, Texas), fourth on lap 44 (overtaking Marlar) and finally third on lap 48 (slipping past Richards).

O’Neal made it clear what was on his mind in the closing laps when Lucas Oil Series announcer James Essex asked him if he was hoping for a caution flag to tighten the field.

Indeed, with O’Neal on the move in his SSI Motorsports Longhorn car, a late caution flag might have made for an interesting finish.

“Man, we needed one there, but there’s nothing you can complain about,” said O’Neal, whose third-place finish followed a fourth-place outing the previous night at Tazewell and his third Lucas Oil Series victory of 2019 on June 15 at Smoky Mountain Speedway in Maryville, Tenn. “I think I was running a little bit different line than everybody else, so I think I definitely would’ve had a shot at ‘em. But you know, ifs and ands, we didn’t get it. We ran third tonight.

Notes: Davenport recorded his third career Lucas Oil Series win at Florence, including a 2015 score in the Ralph Latham Memorial. It was his 43rd overall triumph on the national tour. … Owens remarked afterward that the caution-free nature of the feature and his high-side racing left him gasping for breath. “I was needing some oxygen there about halfway through,” he said. “Pounding that cushion, that just ain’t for me too much.” … Former North-South 100 winner Tim McCreadie of Watertown, N.Y., salvaged a 10th-place finish after relying on a provisional to start 23rd. … Racing at his hometown track with the World of Outlaws Morton Buildings Late Model Series idle, Darrell Lanigan bolted from eight to fifth on the feature’s opening lap and ran in the position for the first 15 laps. After Mike Marlar passed him on lap 16, however, Lanigan steadily faded to a 15th-place finish. … Scott James of Bright, Ind., was scheduled to start 22nd in the feature but pulled out of the race on the parade to seek medical attention for the effects of dehydration on the hot, muggy night. … The Lucas Oil Series returns to Florence Aug. 8-10 for the North-South 100 weekend.