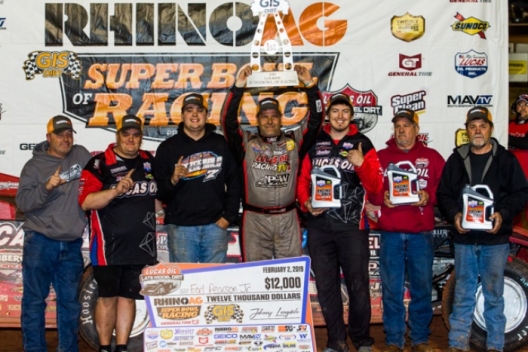 The fifth-starting driver from nearby Jacksonville, Fla., swept around Scott Bloomquist on the backstretch on the 33rd lap and led the rest of the way to capture the finale of the RhinoAg Super Bowl of Racing at Golden Isles Speedway. His 38th career Lucas Oil Late Model Dirt Series victory paid $12,000 and thrilled local fans who watched the 47-year-old Pearson grow from local hero to national star.

“You know what? There ain’t no better feeling than winning a race here in front of my home crowd here,” Pearson said in victory lane after saluting his fans with uncharacteristic burnouts. “It’s just a dream come true to win here at Brunswick. I’ve seen so many fans here, and so many guys I raced with for many years. It’s just a good feeling.”

Not around at the finish was Jimmy Owens of Newport, Tenn., who started outside the front row and led the first 10 laps.

Owens was knocked from contention by Bloomquist’s turn-one slide job on the 12th lap. After Bloomquist edged Owens at the stripe on lap 11, he slid in front of Owens in turn two, briefly checking up as Owens nosed under the rear of the Bloomquist car and spun. The sitting duck Owens collected third-running Josh Richards with the nose of the Owens machine climbing atop the front of the Richards car, drawing a yellow as Pearson, Davenport and others slipped past.

Owens retired on the 37th lap when his car began overheating after losing a radiator cap while Richards, of Shinnston, W.Va., soldiered to a 14th-place finish.

While Pearson was thrilled to win in front of familiar fans, he was quick to dedicate the victory to team owner Ronnie Stuckey, who has been struggling with complications from a winter surgery, keeping him away from his Black Diamond Chassis house car team.

“He’s been awful sick the last three or four months. He’s back in the hospital — I’m sure he’s smiling right now,” Pearson said.

Pearson, who tracked down Bloomquist past the halfway point, went on to win by a half-second margin over Davenport to grab the early points lead after first- and second-place finishes at Golden Isles.

“Me, Scott and Davenport there had one heckuva race. Scott got caught up there in that lapped traffic. Our car’s been good all weekend,” Pearson said, thanking his crew and the “bunch of friends back there helping me.

“It’s just like (the afternoon race). We got up there on top there and just kind of cleaned it up a little bit. Our car worked good up there — we weren’t that great around the bottom (but) Scott was early. (The car’s) been good every time we unloaded it and got on the racetrack.”

Davenport was as fast as anyone in the late stages, but at the expense of overheating his right-rear tire.

“Running in the top there, you just kill your tires so much. I could only run there so many laps,” he said. “I thought with 13 (laps) to go, I said, ‘Well, maybe I can put it on the floor and let it go from here.’ But my (right-rear) tire got so hot, I almost felt like I was getting a flat. It started vibrating a little. So I had to get off the top and move back down, cool my tire off a little bit, and then move back up and try to make one last run at the end.

“This is Speedweeks. Everybody comes here, they bring their best of the best, the best hot rods, something they’ve been working on all winter long. A lot of teams — including us — have come down here and tested, so this is as tough as it’s going to get. So (to finish a) second and third, we can’t hang our heads about that.”

Bloomquist’s loose-handling car in the last 20 laps cost him.

“We ended up getting a little bit loose at the end. I never did really get up all the way as high as Jonathan was — I probably should’ve gotten up there and tried that — but again, we just got a little looser and started spinning off the corner and ended up taking a lot of rubber off the tires,” he said. “All in all it was a pretty good night. We’ll just take it in stride and move on to the next one.”

He’ll go to the next one in better shape than last year, when he finished 17th and 25th in the first two Lucas Oil events at the 4/10-mile oval.

“Last year was pretty tough (starting out), and it’s nice to get a couple of good finishes here,” he said. “We’ll move on to East Bay and just keep working on this thing a little bit more. You know, the race car stuff is changing all the time, and we’re always working on our own ideas, and they’re working on theirs. We’ll just keep maturing ours and hopefully we’ll get to where we need to be.”

Besides the lap-11 scramble that knocked Owens and Richards from contention, the feature was slowed by three more yellows.

Ryan King went around in turn two on the second lap with Morgan Bagley and Kyle Bronson among those getting caught up in the mess; Hudson O’Neal slowed with a flat tire on the fifth lap; and Owens slowed again on the 37th lap before retiring.

Notes: Pearson’s previous Lucas Oil victory came last August in the Dirt Million at Mansfield (Ohio) Motor Speedway, which paid more than $202,000. … The evening’s action was delayed about three hours by rain that struck before time trials; despite the delay, the main event got rolling shortly after 11 p.m. … Ivedent Lloyd Jr. piloted the No. CO2 driven by fellow Floridian Mark Whitener in the main event after taking a provisional starting spot. … Morgan Bagley of Longview, Texas, was the only new entrant in the finale (he missed the opener because of generator problems on his hauler). … Drivers who skipped the finale after competing in the opener were Colton Horner of Katy, Texas; Coleby Frye of Dover, Pa.; Chris Ferguson of Mount Holly, N.C.; Kerry King of Delmar, Del.; Brian Conner of Martinez, Ga.; and Brian Shirley of Chatham, Ill., who virtually destroyed a car barrel-rolling into turn three in Saturday afternoon’s main event.

Correction: Fixes caution as 12th lap and Bloomquist as leader of 11th lap.

Series-opening winner Tyler Erb  kept rolling, winning the final 10-lap heat from the pole position with ease. Chase Junghans banged his way past Jeff Mathews for second on the seventh lap and held onto the runner-up spot while Mathews settled for third, just ahead of Gregg Satterlee.

Jimmy Owens led all the way from outside the front row, taking the victory over Jonathan Davenport. Don O'Neal and tail-starting Morgan Bagley — who took a spot from Shanon Buckingham with two laps remaining — for the final two transfer spots. A lap-two yellow appeared for Jason Fitzerald's turn-three spin. On the first start, the third-starting O'Neal went around between turns one and two on the first lap in a tangle with Fitzgerald; with more than one car involved, O'Neal got his starting spot back for the second attempted start, but Joel Callahan and Ivedent Lloyd Jr. retired.

Josh Richards led all the way from the pole for his second heat win of the season. Richards cruised comfortably ahead of runner-up Ryan King while Dennis Erb Jr. scored a third-place finish. Further back, seventh-starting Devin Moran slipped by Hudson O'Neal on the seventh lap to grab the final transfer spot in the caution-free prelim. Devin Gilpin retired after seven circuits.

Third-starting Scott Bloomquist won an early side-by-side duel with Earl Pearson Jr., jumping ahead entering turn three on the second lap for a lead he'd never give up. Bloomquist cruised the rest of the way for a victory of Pearson while Brandon Sheppard and Kyle Bronson got the other two transfer spots. The lone caution appeared for a slowing Blair Nothdurft on the sixth lap.

The finale of the RhinoAg Super Bowl of Racing is set for Saturday evening at Golden Isle Speedway as Lucas Oil Late Model Dirt Series drivers chase a $12,000-to-win, $1,000-to-start purse to wrap up a schedule-shuffled weekend.

The event will be the second of the day for the national tour after rain halted Friday’s evening during consolation races, forcing a makeup race for Saturday afternoon.

Entries will be split in half for time trials followed by four heat races (four transfer apiece), two consolation races (three transfer apiece) and the 50-lap main event at the 4/10-mile oval.