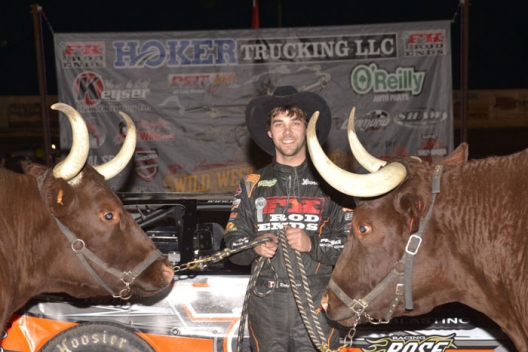 The 11th-starting Weiss led the final two laps of the Shaw Trucking 50 after his mentor and chassis builder Scott Bloomquist was collected in a last-lap wreck in turn three and after three-race winner Bobby Pierce exited with rear-end problems while leading just past halfway.

The week’s second victory for the driver from Headingley, Manitoba, proved to be a wild ending to the Wild West week, leaving the Canadian with mixed emotions in victory lane.

“I hate to see that for Scott. He was checked out. He was gone,” Weiss said. “I mean, I just can’t thank those guys enough … I feel heartbroken for him and (Bloomquist crew chief) Cody (Mallory) and they’d been working hard and had so much bad luck this week, and our speed is thanks to them.

“We’ve been working as a team and I can’t thank (crew chief) Shawn (Gage) enough, he’s been working his butt off. Like I said earlier, he built this car from scratch. It’s just kind of surreal. You never see a caution on the white-flag lap, nevermind a pileup like that. It just sucks for him.”

Restarting out front after Bloomquist’s demise, Weiss won the two-lap shootout over runner-up Brandon Overton of Evans, Ga., by 1.109 seconds to record his fourth career miniseries victory, all during the past two seasons.

Brandon Sheppard of New Berlin, Ill., rallied from 15th to third to wrest the $3,000 miniseries title from Pierce while Chase Junghans of Manhattan, Kan., and Jimmy Mars of Menomonie, Wis., rounded out the top five at the third-mile desert oval.

What was shaping up to be a Pierce-Bloomquist showdown through the first half of the race evaporated when the pole-starting Pierce suddenly slowed on the frontstretch after leading 26 of the first 27 laps, dropping to the infield with fluid coming from the rear end.

Pierce, who won the first three miniseries races, had the most to lose while chasing a $25,000 bonus from the Keyser Quarter-Million Challenge with a fourth victory. His departure left Pierce to settle for the $10,000 bonus he’ll receive for winning half the races.

With Pierce out of the race, Bloomquist took control with Weiss giving chase, and Bloomquist stretched his lead to 3.5 seconds in the race’s waning laps as he cruised far ahead of the field.

But after taking the white flag, Bloomquist found disaster in turn three when R.C. Whitwell’s spun car sat against the wall, leaving Bloomquist nowhere to go. His car suffered heavy right-side damage as he spun to a stop in the middle of the track with Pat Doar’s car sliding into the fray.

Bloomquist said the “the dark wall, the dark car, the circumstances” prevented him from being able to avoid striking Whitwell’s machine.

“I had gotten almost to the corner, but I had too much speed,” said Bloomquist, who thought he heard race director Kelley Carlton call for a caution about 50 feet before making contact. “When you’re trying to maneuver and you’re counting on that cushion to catch you, shen you gotta try to maneuver to be underneath it in the black (streak in the surface), there’s really not a lot to catch you. I still did try to get on the cushion and turn down, but we were carrying too much speed.”

With Bloomquist’s damaged machine restarting on the tail of the lead lap, Weiss held off Overton and Sheppard for his second miniseries victory in as many days. He was wary of the final restart.

“I seen Overton come on the outside there, I knew he’d whale that cushion," Weiss said. "It was a little treacherous up there. Later in the race actually, when Scott was kind of pulling away, I was just kind of moving around and feeling it out, and I seemed to get better as I could kind of cut down that corner.

“I knew that wouldn’t hold the lead. I whaled it in there and it started bouncing a little bit, and got it under control, and it was just great to see the checkered come out.”

Overton’s runner-up finish marked his third top-five of the tour and gave him a third-place finish in miniseries points behind Sheppard and Pierce.

“I’m looking forward to getting back home and going to some places we’re familiar with,” said Overton, who in Arizona made his debut for Joey Coulter’s Rum Runner Racing team. “This tire (rule) kind of kicked our butt over here this weekend, but it ain’t no big deal. We’ll work on it and come back next year and see what we’ve got.”

Sheppard, who never finished no worse than fifth in six races, felt his car was as good as it was all week in advancing a dozen positions to secure third and the miniseries title.

“We stayed in the top-five all week and that’s pretty cool," Sheppard said. "Obviously we’d like to get a win, but we had a lot of bad luck this week that nobody seen. On the test day we broke a lift bar and tore everything up, and we had to change a (transmission) today, and it was just one thing after another. Hat’s off to my crew.

“It was a fun night. We had a really good race car tonight. I changed everything but the steering wheel today during the day, just messing around, having a little bit of fun. It worked out for us.”

Besides the late caution for Bloomquist’s wreck, the 50-lapper was slowed by three yellow flags, first on the ninth lap when Joey Moriarty’s car got hung up on the turn-one wall at the track exit, again on the 12th lap when Stormy Scott got into the turn-three concrete and finally when Pierce slowed on lap 27.

Notes: Officials announced at the drivers’ meeting that 2020’s miniseries race dates were Jan. 11-12, 15 and 17-19 with a Jan. 10 practice. Next season’s finale will pay a miniseries-high $15,000-to-win for Super Late Models. … Jason Papich of Nipomo, Calif., and Blair Nothdurft of Sioux City, S.D., finished in the top two spots in the Pro Power Dash for non-qualifiers; Papich elected to start the 50-lapper while Nothdurft took the $1,000 in earnings. … Justin Duty of Mulino, Ore., who skipped Saturday night’s event to make an engine swap, got into the backstretch wall during time trials and scratched for the night. … Ricky Thornton Jr. captured the USRA modified finale to become the division’s only repeat winner; Darrell Nelson won the division’s points title. … Cole Searing won the caution-free X-mod main event, wrapping up the division’s miniseries points title with his fourth victory.

Jimmy Mars led all the way from the pole while R.C. Whitwell wrested the second spot away from Chris Simpson early in the eight-lapper. Simpson settled for third while Garrett Alberson won a tight battle with Billy Franklin for the final transfer spot. Franklin spun in turn two on the first attempted start after getting in too hot under Alberson.

Chase Junghans raced to victory from outside the front row, taking the checkers ahead of polesitter Pat Doar. Ricky Weiss moved up to second early before Doar's second-lap slide job dropped him back to third, and he transferred along with fourth-finishing Brandon Sheppard. Stormy Scott inched ahead of Sheppard on the second lap but settled for fifth and heads for a consolation race.

In a battle royale of a Scott Bloomquist-Bobby Pierce front row, Pierce got the jump on the outside and raced to victory. Bloomquist nearly lost the second spot to Earl Pearson Jr., before settling into second while Pearson and Kyle Beard got the other transfer spots. The race went caution-free as Pierce moved a step closer to a possible $25,000 bonus for four miniseries feature victories.

Polesitter Cade Dillard washed up in turn two on an early restart, giving up the lead to Brandon Overton, who raced to an eight-lap victory. Dillard settled for second while Cody Laney was third after front-row starter Hudson O'Neal also struggled on the early restart. Dennis Souza spun for a second-lap caution.

Not only the is event’s richest purse on the line — every starter earns at least $1,000 — but Bobby Pierce of Oakwood, Ill., can earn a $25,000 bonus from the Keyser Quarter-Million Challenge if he can capture his fourth miniseries victory.

Sunday’s hot laps are scheduled for 3 p.m. (moved up a half-hour to make room for Saturday's postponed USRA modified feature). Modifieds and X-mods are on the undercard of the Super Late Model program.

The top four finishers in each of four heat races transfer to the $1,000-to-start main event with the winners redrawing for the first two rows of the feature lineup. Two consolation races will transfer four drivers apiece to the 24-car field for the main event.