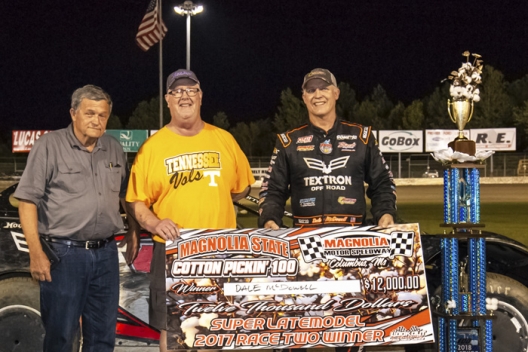 COLUMBUS, Miss. — After rallying from 13th to finish second in Friday’s Magnolia State Cotton Pickin’ 100 opener at Magnolia Motor Speedway, Dale McDowell said he needed to qualify a bit better if he wanted to increase his odds of winning. On Saturday the Chickamauga, Ga., driver did qualify slightly better — sixth in his group as opposed to 16th. And he did start the 70-lap feature in a slightly better spot — 11th rather than 13th.

McDowell’s feature result, as it turns out, was slightly better as well. Improving one position from Friday’s runner-up finish, McDowell capped a stellar weekend at the 3/8-mile Mississippi oval with his first career triumph in the annual event.

“We were a little tight,” said McDowell. “(Car owner and brother) Shane (McDowell) and them made some last-minute changes on the car so I could rotate the bottom there. (I) moved out last night and passed kinda in the middle. Tonight I kinda just stayed around the bottom … tried to take care of my tires and just be patient. That was the biggest thing.”

Working his way forward from the sixth row, McDowell caught and passed Austin Rettig of Sikeston, Mo., on lap 54 and led the final 16 laps for a $12,000 victory. The Hall of Famer had to hold off Rettig during a two-lap shootout following a late caution, but managed to keep him at bay. Rettig — who had paced the field for a dozen laps after driving by Cory Hedgecock of Loudon, Tenn., on lap 42 — settled for second, while Billy Moyer of Batesville, Ark., rallied from 20th to finish third. Fifth-starting Brian Rickman of Columbus, Miss., hung around the top five all night and registered a fourth-place finish while Dane Dacus of Lakeland, Tenn., marched forward from 21st to complete the top five.

McDowell, who was inside the top five by lap 10, had to wait his turn while four others spent time at the front of the pack. Friday winner Chris Ferguson of Mount Holly, N.C., lead the first eight laps after starting from the pole position. He gave way to Cade Dillard on lap nine, but Dillard’s time out front was short-lived when he was forced pitside with mechanical problems on lap 14.

Ferguson led another lap before Hedgecock took over and led the next 27 circuits. Rettig, who started sixth, grabbed the lead on lap 42 and showed the way over the next 12 laps until he slipped up the track in turn two, allowing McDowell to get a solid run on the inside. McDowell drove alongside as they raced down the back stretch, taking a lead he’d never give up.

When the final cation came out with two laps remaining, McDowell had a comfortable advantage, but he knew that anything was possible over the final dash to the checkers.

“Really I thought dadgummit because I felt like that top … when you’re the leader, you really don’t know where to go, so I just ran my same line that I had been running,” McDowell said. “I moved out a little bit down the straightaways to carry a little momentum. But you’re a sitting duck if you’re the leader. If you go to the right place you’re OK, if you don’t, you’re not.

“And they’re gonna go where you aren’t most of the time. It just worked out for us tonight. The good Lord meant for it to be on our side tonight and we appreciate that.”

Though McDowell denied Rettig his first win of the season, the 24-year-old runner up wasn’t ready to use his bumper to get a victory.

“I really thought about it,” admitted Rettig during his post-race interview with Magnolia Motor Speedway Ben Shelton on the front stretch. “I thought man I could shove him up, but he’s such a good guy and he treats me well and clean racing … that’s just the way we want to do it. To be able to run with Dale McDowell here, that’s pretty awesome.”

While Moyer finished third for the second straight night, his path to another podium finish was much different. Rather than giving up two spots in the final two laps like he did in a disheartening defeat on Friday, Moyer charged around the outside to pass Rickman and Dacus on the final two laps Saturday. It completed a rally that started with a victory in the final consolation race.

“We’ll take it I guess,” said Moyer. “It was a lot of work tonight. We had some luck go our way there with a couple guys falling out in front of me or whatever … they wrecked or whatever.

“We had a pretty decent car. We’ll take it. (After) that B-main we didn’t get to work on nothing … barely got my tearoffs on to get ready for the race, so we didn’t get to tune on it like I would’ve like to. Anyway it all come out OK. Maybe we would’ve made the wrong moves on it anyway. So we’re happy with that.”

Notes: McDowell finished 0.123 seconds ahead of Rettig. … Fourteen cars were running at the finish, with 10 completing all 70 laps. … The two-day event drew 62 cars total for the two separate shows, with 57 competing each day. … Driver’s competing in Friday’s opener but not in attendance Saturday included David Doherty of Sydney, Australia; Brad Couch of Bossier City, La.; Mike Myers of Ruleville, Miss.; Ryan Carter of Blackshear, Ga.; and Craig Scott of Newnan, Ga. … Drivers joining Saturday’s program after missing Friday’s action included Jay Scott, Daniel Miller, Jadon Frame, Wayne Southernland and Mark Edwards. … Friday winner Chris Ferguson led early but eventually slipped out of contention and out of the top five. “We pinned the nose under the car a little bit, but we were really just way too tight,” said Ferguson. “I just couldn’t turn like I could last night.” … The race was slowed by five cautions: Tanner English slowed on lap 10; Cade Dillard slowed on lap 14; Jack Sullivan stopped in turn three on lap 14; Cory Hedgecock had left rear flat on lap 56; and Jared Landers slowed on lap 68.