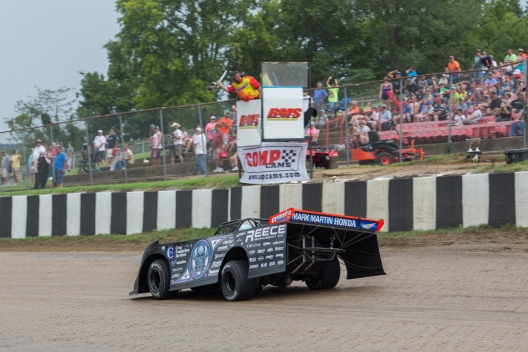 Advancing from the 23rd starting position, Bloomquist assumed the point when race leader Austin Rettig of Sikeston, Mo., slowed with a flat tire, outrunning Gregg Satterlee of Indiana, Pa., at the checkers for his fifth career Topless 100 victory.

“The car was awesome,” Bloomquist said. “Once we moved out and got outside, we got by a bunch of cars. Just had to take it easy on the tires.”

Polesitter Tim McCreadie of Watertown, N.Y., charged to the lead at the drop of the green flag, holding command of the field as drivers worked around the bottom of the racetrack. With several competitors pitting early to change tires, McCreadie maintained his lead at the halfway mark.

It was just past the halfway point of the 100-lapper that Rettig began his charge. Powering around the high side of the racetrack, the Missouri driver rallied from the 21st starting spot to run in third on lap 60, overtaking McCreadie for the lead four circuits later.

But Rettig’s lead was short-lived, as he pitted under a lap-65 yellow to change a tire. Inheriting the point, Bloomquist was never seriously challenged for the lead, scoring his seventh Lucas Oil Series triumph of the season and first Topless 100 victory since 2011.

“We were looking somewhere in the (lap) 40s,” Bloomquist said of his strategy. “That’s what worked out for us. I just kept watching the lead cars, the good cars. They were starting to have trouble on lap 60. I knew we had enough if we just kept the car straight. Everything was great. Everything ran smooth today."

As Bloomquist led the way out front, the battle from second was far from over. Shannon Babb of Moweaqua, Ill., overtook Jimmy Owens of Newport, Tenn., late race, only to fall to Satterlee on lap 83. Slowing in turn three, Babb drew the final caution on lap 98.

Satterlee finished runner-up, with Dennis Erb Jr. of Carpentersville, Ill., improving from the 13th starting spot to run third. David Breazeale of Four Corners, Miss., finished fourth, with McCreadie rallying back to the front of the field to round out the top five.

“We had a really good car,” Satterlee said. “I was really just happy to be up here and get a top-five. We’ve had a little bit of a struggle with our season here lately, so we’re working, trying to get better and made good decisions on the car.

"I was a little bit tight after hot laps and we tried to just make the car drive as freely as possible so we could save tires. We had a lot of tire left on the right-rear. We pitted 60-some laps in and just kind of took a guess at when we needed to get a new tire. I was able to get in and out quick and was able to get ahead of a bunch of cars and really was able to make the middle of the racetrack work really well and was able to get right to second. Scott (Bloomquist) was awful good. I thought maybe I’d be able to roll him on the outside, but there was a fine line of too high and not being high enough."

His pit strategy proving to be the right decision, Erb was pleased to come away with a podium finish in the caution-plauged 100-lapper.

“We had a good run,” Erb said. “We pitted there about halfway and got some fresh tires and was able to conserve them there towards the end. We didn’t have much left at the end, but we were able to hold on for third."

Notes: Bloomquist, who previously won the Topless 100 in 1999, 2001, 2006 and 2011, has a series-best 84 career Lucas Oil victories. ... The caution-plagued feature took well over an hour to complete. ... Polesitter Tim McCreadie led the first 63 laps; Austin Rettig led a single lap following McCreadie. ... The duo of McCreadie and Rettig were each forced pitside for tires on lap 65. ... Among other drivers that held the runner-up spot during the feature before suffering a demise were Don O'Neal, Josh Richards, Jimmy Owens and Shannon Babb. ... The crown jewel event was co-sanctioned by the Comp Cams Super Dirt Series. ... Time trials and heat races were contested Friday. ... Feature action was originally scheduled for Saturday before Mother Nature intervened.

Lap 93: Owens slows to draw a caution. He was the last car to pit.

Lap 88: Darrell Lanigan slows with a flat tire. Bloomquist leads Satterlee, Babb, Dennis Erb Jr. and Owens. Owens and Pearson are the only two cars that have no yet pitted.

Lap 64: Rettig pulls ahead of McCreadie down the backstretch to take the lead.

Lap 60: Rettig is up to third from 21st, with Scott Bloomquist in tow.

Lap 55: Charging around the top side, Austin Rettig has improved from a consolation transfer spot to run among the top 10.

Lap 44: Richards pulls ahead of O'Neal to run in second.

Lap 43: Another yellow flag flew when Shannon Babb slowed off the pace.

Lap 40: McCreadie holds his lead, with O'Neal and Richards running a close second and third. The majority of the competitors are running the bottom line.

Lap one: Polesitter Tim McCreadie charges ahead of Don O'Neal to lead the opening lap.

3:03 p.m.: Feature cars roll on to the racetrack and get set for pace laps. With a chance of rmore rain later this afternoon, there will be no driver introductions.

Polesitter Jon Mitchell took an early lead, with third-starting Timothy Culp charging ahead of outside polesitter Robbie Stuart in turns one and two. As the race reached the halfway mark, Mitchell and Culp distanced themselves from the field, with Scott Bloomquist attempting to move forward after starting on the tail. With Mitchell shredding a tire coming to the white flag, Culp won the consolation. Mitchell and Kellick grabbed the final two transfer spots. With the flat tire, Mitchell was declared light at the scales, forfeiting his transfer spot.

Slipping ahead of polesitter David Breazeale in turns one and two, second-starting Steve Francis led the opening lap, with fourth-starting Jack Sullivan spinning in turn two to draw a caution on the first circuit. Francis held his lead through the restart, with Breazeale and Austin Rettig holding their transfer spots. Francis stretched his at the halfway mark, picking up the win in the consolation. Breazeale and Rettig rounded out the podium.

Despite the track crew’s tireless efforts to get the racing surface rolled in, heavy evening rains have forced the postponement of Saturday’s Comp Cams Topless 100 finale. The program has been reset for Sunday, with gates opening at 11 a.m. and racing set to begin at 2 p.m.

Rain started falling around 6:15 p.m., delaying Saturday’s program by a couple of hours. … Because of heavy rains hitting the track shortly after Friday’s heat races concluded, DirtonDirt.com did not have post-race interviews from the Topless 100 prelims. … Losing a motor during Friday’s first heat race, Mike Marlar of Winfield, Tenn., has scratched from Saturday’s program. … Among other drivers scratching from Saturday’s show are Shannon Scott of Henryetta, Okla., and Scott Crigler of Monticello, Ark. … … Scott Bloomquist of Mooresburg, Tenn., was among Friday’s heat race winners, but was disqualified after weighing in 45 pounds light at the scales. … Wendell Wallace of Batesville, Ark., was also light at the scales following his heat race, forfeiting a feature transfer spot. … Jack Sullivan of Greenbriar, Ark., made the short trip home on Friday night to change an engine. He’ll start fourth in the first consolation. … Among drivers qualifying for the Topless 100 for the first time are Josh Richards of Shinnston, W.Va., Hudson O’Neal of Martinsville, Ind., Gregg Satterlee of Indiana, Pa., and Bobby Pierce of Oakwood, Ill. … Former Topless 100 winners locked in to Saturday’s feature event through Friday’s prelims are Tim McCreadie of Watertown, N.Y., Jimmy Owens of Newport, Tenn., Shannon Babb of Moweaqua, Ill., Jared Landers of Batesville, Ark., and Billy Moyer of Batesville, Ark. … Babb is the defending Topless 100 winner, while McCreadie scored a $20,000 victory in Batesville’s Bad Boy 98 back in April. … Modifieds will also be in action with a complete racing program.

The top four finishers from each of Friday’s heat races transferred to the weekend’s main event. Saturday’s program will include a pair of consolations, which a long with provisionals, will set the remainder of the field.