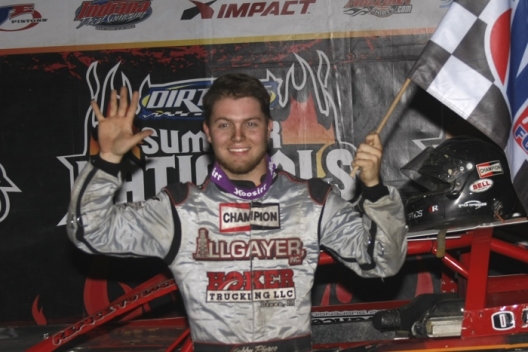 WAUSEON, Ohio (July 14) — Bobby Pierce of Oakwood, Ill., already had his third consecutive UMP DIRTcar Summernationals championship clinched before taking the green flag in Friday night’s 40-lap feature at Oakshade Raceway. He celebrated by adding another victory to his ledger.

Surging past race-long pacesetter Rusty Schlenk of McClure, Ohio, in lapped traffic on lap 32, Pierce assumed command and turned back a furious comeback bid from Schlenk over the final circuits to kick off the 3/8-mile oval’s Birthday Race weekend with a $5,000 score.

The 20-year-old sensation registered his fifth Hell Tour triumph of 2017 — tying him with Brandon Sheppard of New Berlin, Ill., for winningest-driver status — and his first-ever victory at the down-home track located about a half-hour’s drive west of Toledo.

Schlenk, who turns 31 on July 20, settled for a runner-up finish, 0.509 of a second behind Pierce. The race’s polesitter had kept his self-owned Rayburn No. 91 at the front of the pack until a miscue while negotiating slower traffic through turns three and four on lap 32 opened the door for Pierce, who started fourth, to vault ahead for good.

Pierce had a simple synopsis of his winning move: “I was in the right spot at the right time.”

Indeed, Pierce, who reached second place with a lap-21 pass of Unzicker and caught Schlenk about 10 circuits later, was perfectly positioned to take advantage of Schlenk’s slip on lap 32. When Schlenk made contact with the lapped Gordy Gundaker of St. Charles, Mo., between turns three and four, he slipped out of the prime lower groove and could only watch Pierce grab the top spot.

“Rusty was having trouble with lapped traffic,” Pierce related. “It’s really hard sometimes for the leader — do I go to the outside of him, or do I dive to the inside? When it started rubbering up a little bit, I’m sure it got hard for him to know where to go. Then he dove down in there and he got into Gordy a little bit … I think he just overshot it a little bit. It doesn’t take much. When he hit him, I think he let off the gas because Gordy almost was spinning, they both kind of shoved up, and at that time I was right there and just shot right by them.

“After that I was just trying to hang onto the lead. Luckily, we held on, but (Schlenk) was right there on my bumper the whole time.”

Schlenk was able to get completely underneath Pierce off turn two on lap 37, but he couldn’t complete the pass.

“He almost got me back,” Pierce said of Schlenk. “I was trying to get around (Bob) Gardner there (to lap the East Peoria, Ill., driver in the closing laps), and, every single time in (turns) one and two, when you’d hit it wrong it would be like you were on ice coming off of two. I realized I had to get lower and lower and lower … I thought I was low enough, but obviously I wasn’t because (Schlenk) peaked his nose in there, but he gave me enough room to get back down to the bottom in front of him (entering turn three).”

With the Summernationals crown in his back pocket before the start of Thursday night’s series event at Merritt Speedway in Lake City, Mich., Pierce was a driver totally at ease while celebrating his triumph.

“It’s really nice,” Pierce said when asked about his early clinching of the title. “My first time I won the Summernationals (in 2015) it came down to the final night (at Oakshade) with me and Little Billy (Moyer Jr.). I think I was running like eighth in the feature while he was leading it and at that time I would’ve lost the points, but I got up to fifth or fourth in that race and won by only 10 points. It was a really close battle, but this year, we don’t have to worry about points. We can kind of just relax this whole weekend and go for the win.”

Schlenk, meanwhile, thought he was destined to secure his first Summernationals victory since the 2010 Birthday Race at Oakshade until he made a critical mistake on lap 32.

“Driver error,” said Schlenk, a six-time Oakshade points champion. “I missed my entry into three. My entry into three was four, five car lengths better than everybody’s, and when I got to lapped traffic I had to try and figure out how to get through there. Well, I set the car down too early trying to keep from getting into the back of the 11 car (Gundaker) and I just got tight and pushed up out of the rubber. Once I pushed up out of the rubber I left Bobby the whole bottom, so I was a sitting duck until I could get back down in it.

“I think we were still better than (Pierce) at the end … we were better in the slick. It wasn’t quite rubbered up down in one and two, so I could roll through there a little bit better than him. The whole bottom half of the racetrack was slick, and all of one and two was slick because those crumbs kind of kept it clean.

“About three to go there I was about half a car ahead of him,” he added. “But he caught that rubber out by the wall (on the backstretch) and put two, three car lengths on me. That was about it. I didn’t want to get in there and door him. He never runs me like that, so I wasn’t gonna do that to him.”

The race’s lone caution flag flew on lap 18 when Brent Larson of Lake Elmo, Minn., spun in turn two right in front of the leaders. Schlenk had Unzicker in position to challenge when the incident occurred.

Six-time Oakshade champion Rusty Schlenk drew the pole position for the 40-lap feature. He has one Summernationals victory at his home track, in 2010 — the last of his two career Hell Tour triumphs. … Bobby Pierce will go for a sweep of the evening’s program from the fourth starting spot. He’s gunning for his first-ever Summernationals win at Oakshade. … Mathew Chapman was scheduled to start fifth in the feature, but he will instead take the green flag from the rear because mechanical trouble forced him to pull out a backup car. … Provisionals starters are Gordy Gundaker and Brent Larson (Summernationals), Michael Kloos (UMP national points) and Dusty Moore (track).

After swapping the lead on each of the race’s first three laps, Brandon Thirlby surged ahead of Brian Ruhlman on the fourth circuit and pulled away to a convincing victory. Ruhlman finished 1.729 seconds behind in the runner-up spot and Jason Feger claimed the final transfer position.

Mathew Chapman ran away with the prelim, leading from wire-to-wire to defeat Curtis Deisenroth by a commanding margin of 3.093 seconds. Deisenroth’s teammate, Steve Kester, finished third.

A caution flag flew on the opening lap for a tangle in turns one and two involving Graeme Short and Bob Mayer.

Rusty Schlenk led all the way, surviving a last-lap restart to defeat Billy Moyer Jr. by 0.707 of a second. Travis Stemler was close behind Moyer in third at the finish. JR Gooden brought out the race’s lone caution flag when he stopped in turn two on lap nine.

Jon Henry outdueld Brad Eitniear for the lead at the start and never looked back en route to capturing the prelim by 0.920 of a second over Eitniear. The race was slowed by a caution flag on the opening lap for Dan Gehring’s spin off turn two and another on lap seven when Gehring and Cody Houston spun between turns one and two.

Cody Mahoney cruised to a flag-to-flag triumph, maintaining a steady edge over Kent Robinson throughout the distance. Jeff Babcock passed Bob Gardner for third midway through the race and finished in the final transfer spot.

Bobby Pierce dominated the event, leading the entire distance without facing a serious challenge. He beat Ryan Unzicker to the finish line by 1.483 seconds and Curtis Roberts was another second behind in the third at the checkered flag. A caution flag flew on lap four when Ryan Missler spun in turn three while battling for second with Rob Anderzack and Ryan Unzicker; officials sent Anderzack to the rear of the field with Missler for initiating the contact.

Bobby Pierce of Oakwood, Ill., was the overall fastest qualifier among 59 entrants, turning a lap of 15.702 seconds in the first group. He will start from the pole position in the first of six 10-lap heat races.

Rusty Schlenk of McClure, Ohio, was quickest in the second group, clicking off a circuit of 15.755 seconds to grab the pole for the fourth heat.

The significance of the Birthday Race weekend at Oakshade Raceway for the local racing community is abundantly clear from the car count for Friday night’s opener. A huge field of 59 Dirt Late Models is signed in for action — easily the largest of the 2017 UMP DIRTcar Summernationals. … Oakshade was deluged by heavy rain in recent days — leaving big collections of water in the infield — but Friday has brought beautiful weather. Sun has been peeking out of puffy clouds all day and the high temperature has reached about 80. … There will be no Hell Tour championship drama this weekend as Bobby Pierce of Oakwood, Ill., has already clinched his third consecutive title. The battle for the $2,000 Champions Week crown sponsored by FK Rod Ends, however, will be decided at Oakshade; Billy Moyer Jr. of Batesville, Ark., leads the standings on the strength of his back-to-back wins in Michigan. … Jon Henry of Ada, Ohio, is back hoping to repeat his memorable victory in last year’s Birthday Race finale. He’s only made about a half-dozen starts this year with his Club 29 Race Car — the same machine he drove to a $10,000 triumph last year at Oakshade — but he wouldn’t miss this show. “This is one of my favorite races of the year,” Henry said. … Cody Mahoney of Hanover, Ind., is entered in the Bowman Motorsports mount after experiencing a frustrating fate in Thursday night’s Summernationals feature at Merritt Speedway in Lake City, Mich. After a mid-race caution period, he went from challenging Moyer Jr. for the lead to fading to a seventh-place finish because his LM30-compound right-rear tire sealed over. … Rusty Schlenk of McClure, Ohio, is driving his own No. 91 Rayburn car in the weekend’s doubleheader. … Dustin Nobbe of Batesville, Ind., will close out his first complete tour of duty on the Summernationals with his first-ever start at Oakshade. The 21-year-old has visited the track before, however — two years ago when he attended the Birthday Race as a crewman for fellow Hoosier State driver Scott James. … Nobbe is one of seven drivers on the verge of attaining perfect attendance on the ’17 Summernationals, joining Pierce, Moyer Jr., Gordy Gundaker of St. Charles, Mo., Brent Larson of Lake Elmo, Minn., Bob Gardner of East Peoria, Ill., and Australia’s Paul Stubber.

The UMP DIRTcar Summernationals begins into its last weekend of points racing with a two-day program at Oakshade Raceway, a series stalwart that will host a pair of complete Hell Tour events for the second straight year. Friday night’s $5,000-to-win show leads into Saturday evening’s traditional 60-lap Birthday Race that boasts a $10,000 top prize.