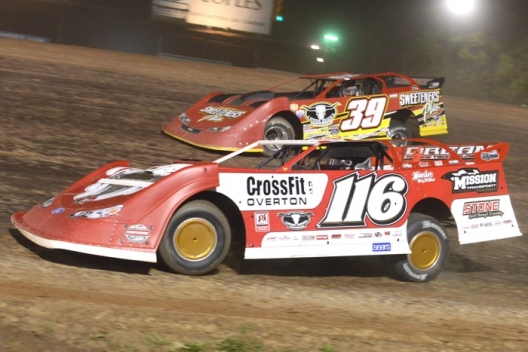 One year after winning his first-ever World of Outlaws Craftsman Late Model Series A-main in a Firecracker 100 preliminary, the 26-year-old sensation from Evans, Ga., upped the ante Saturday night by capturing the 11th annual event’s grand finale with a flawless flag-to-flag run at the front of the field.

“I won my first Outlaw race here and this is the biggest win of my career so far,” Overton said after pocketing a personal-best $30,000 paycheck. “This place is treating me real good.”

In a 100-lap race that ran caution-free from start-to-finish, Overton steered his Dream Racing Longhorn Race Car into the lead from the pole position at the initial green flag and never officially relinquished the it. Tim McCreadie of Watertown, N.Y., did briefly surge ahead of Overton off turn two on lap 21, but Overton crossed over his 43-year-old challenger exiting turn four to main command as the 22nd circuit was scored.

Shortly thereafter, on lap 36, Mike Marlar of Winfield, Tenn., slipped past McCreadie for second place and never let Overton out of his sight for the remainder of the distance. But, with the 4/10-mile oval’s surface locked down at the end of a long day that began with an afternoon preliminary program postponed from Thursday night, Marlar couldn’t find a route to overtake Overton and settled for a runner-up finish, 0.456 of a second behind the victor.

McCreadie was a close third at the race’s conclusion, just over 1 second in arrears of Overton. Sixth-starter Don O’Neal of Martinsville, Ind., caught the lead trio in the final laps after racing more than a straightaway behind them most of the way and finished fourth and eighth-starter Chris Madden of Gray Court, S.C., completed the top five after dropping out of the afternoon 30-lapper due to a broken driveshaft.

WoO points leader Brandon Sheppard of New Berlin, Ill., who scored a $6,000 triumph in the day’s preliminary A-main, finished a quiet eighth. He gained the position with a lap-34 pass of Sarver, Pa.’s Michael Norris but his advance from the 12th starting spot stalled there as the track turned one lane.

For Overton, the race’s most critical moment was undoubtedly lap 21 when McCreadie, who started fourth, snuck by him on the inside of turns one and two and lurched ahead. The young driver felt fortunate he was able get back in front of McCreadie off turn four because at that point the track was in the process of really locking down.

“McCreadie passed me, and then I slid McCreadie back and got on the bottom,” Overton said. “That’s when it started rubbering, right there. Like I just told somebody, if I wouldn’t have passed him back, he probably would’ve won the race. After that, there was nothing you could do.”

Overton proceeded to alter his line around the speedway, staying “down there (on the inside) instead of me swinging out and running around the top,” he said.

McCreadie, who made his first start in a Longhorn car that Justin Labonte plans to drive this year because his primary machine was sidelined during the preliminary program by a carburetor booster that broke off and lodged in the engine, also understood the significance of that circuit.

“It was rubbered in (entering turn three) and to the middle of four, and then down the straightaway all the way into one and then about halfway down the backstretch,” said McCreadie, who fell one spot short of matching his career-best Firecracker 100 finish of second, in 2013. “If you got beside somebody, it wasn’t rubbered wide. It was like a strip, and I kind of didn’t have my right-rear in it when I got by (Overton). So he crossed me over, and when he did, he actually caught it and I just didn’t catch it.”

Overton spent there last three-quarters of the century grind calmly circling the track, constantly reminding himself to remain patient rather than force the issue to pass lapped cars. He actually came up to lap Eric Wells of Hazard, Ky., around the halfway mark and smartly opted to cool his jets and stay behind the WoO regular — even with Marlar and McCreadie right on his tail — because attempting to overtake Wells could have caused him to slip out of the groove and give the race away.

“One time we started getting real slow (pacing himself behind Wells) and I seen Mikey (Marlar) come blast in there beside me and then all of sudden I didn’t see him no more,” said Overton, who best finish in two previous Firecracker 100 starts was 11th, in 2016. “After that, I was like, ‘Look, if he can’t pass me and he was a car length ahead of me getting in, they ain’t gonna be able to get around me.’ Then I just calmed down, and (crewman) Josh (Gunter) kept pointing them sticks on the ground telling me to get on the bottom.”

Overton also knew that Marlar, who started from the outside pole, wouldn’t pull any crazy stunts to overtake him.

“I gotta thank Mikey Marlar,” Overton commented. “Me and him race so good together. We don’t ever run each other over, so I can’t thank him enough. I felt him nudge me there a little bit (once late in the race), but I knew he wasn’t gonna take me out to win.”

Marlar, 39, made some attempts to maneuver his Ronnie Delk-owned XR1 Rocket by Overton but simply didn’t have the racetrack available to accomplish a pass.

“There wasn’t a lot there, a lot of room to pass him,” said Marlar, whose best Firecracker 100 finish in four previous feature starts was sixth, in 2012. “I was right under him there multiple times, but we was definitely taking care of each other. I know T-Mac got under me a couple times and could’ve probably laid on me and didn’t.

“They just had that one little sweet spot in the track,” he added. “I tip-toed left of it and right of it, and just couldn’t make anything happen. We got so bottled up with that (lapped) traffic there that I thought, I might be able to roll Brandon here, but I stepped out there and tried it 15 laps earlier and it just wasn’t there. So I had to follow him, but congratulations to him.”

Notes: Overton registered his second WoO win of 2017 — his previous came on May 13 at Smoky Mountain Speedway in Maryville, Tenn. — and third of his career on the national tour. It was also his 10th overall triumph of the season. … Overton competed without his bosses — team owner Chip Stone and team manager Randy Weaver — at Lernerville. Stone and Weaver also weren’t in attendance when Overton scored a $20,000 win in the April 8 Aaron’s King of the Commonwealth at Virginia Motor Speedway. … Three-time and defending Firecracker 100 champion Scott Bloomquist of Mooresburg, Tenn., slowed with a busted fuel pump as the 100-lapper was rolling toward the initial green flag and limped into the pit area, ending his hopes before even completing a lap. … Former Firecracker 100 winner Darrell Lanigan of Union, Ky., was running second on lap four when he retired to the infield because a power steering pump stripped out the oil pump in his Clint Bowyer Racing Club 29 machine. … Sixteen cars were running on the lead lap at the finish of the race, which was run in just over 32 minutes.

Lap 85: Overton continues to calmly follow Wells rather than make a move to pass ... track has become one lane, leaving Marlar and McCreadie in line behind Overton.

Lap 75: Overton running behind Eric Wells rather than attempting to lap him ... Marlar and McCreadie close behind, with O'Neal and Madden closing in.

Lap 60: Overton, Marlar and McCreadie remain very close in traffic ... O'Neal over 6 seconds behind in fourth.

Lap 36: Marlar slips underneath McCreadie in turns one and two for second.

Lap 4: Second-place Lanigan slows and pulls off the track without bringing out a caution ... Overton has solid lead over McCreadie.

11 p.m.: As the field was headed to the green flag, fifth-starter Scott Bloomquist suddenly slowed and pulled to the infield. The race started one pace lap later — with Bloomquist in the infield with terminal trouble.

10:50 p.m.: The 26-car field is lined up on the homestretch and WoO announcer Rick Eshelman — dressed as Uncle Sam for the occasion — is introducing each driver.

G.R. Smith of Cornelius, N.C., grabbed the lead from teenager Michael Lake of Uniontown, Pa., on lap eight and never looked back en route to winning the Uncle Sam 30 for non-qualifiers.

Combining his home track knowledge with his qualifying prowess, Michael Norris of Sarver, Pa., earned overall fast-time honors with a lap of 16.889 seconds in the first group. The performance put him on the pole position for the first heat.

“Hopefully tonight is gonna go smooth,” Norris said, “and I don’t drive like a bonehead.”

Norris’s “bonehead” comment referred to his performance in a heat-race Saturday afternoon. He wasn’t happy that he missed a transfer spot after having some trouble staying on the racetrack.

“I got off to a bad start,” Norris said of the heat, “and then I kind of lost my head and drove too hard. I should have just stayed calm.”

First-time Lernerville visitor Kyle Bronson of Brandon, Fla., was fastest in the second group, turning a lap of 17.445 seconds. He will start on the pole of the third heat.

Other heat polesitters are Mike Marlar of Winfield, Tenn., and Don O’Neal of Martinsville, Ind.

Hot laps for the evening program started right on schedule at 8 p.m. … A 44-car field is signed in for the Firecracker 100 finale. The only afternoon entrant not continuing to race is Mike Pegher Jr. of Wexford, Pa., who broke a motor in time trials. … Dale McDowell of Chickamauga, Ga., is hoping that the mechanical problem that dive-bombed his afternoon feature effort is solved. His car’s motor shut off as he drove onto the track to line up on the homestretch in the 13th starting spot and wouldn’t restart; he was pushed to the pit area where his crew got the powerplant retired so he could take one lap at the rear of the field. McDowell’s brother and car owner, Shane, thinks it was a transmission or clutch malfunction. … Tim McCreadie of Watertown, N.Y., slid over the turn-two bank on lap nine of the afternoon’s fourth heat because his throttle stuck. “It was scary for a second there,” said McCreadie, who was able to hit the kill switch in time to avoid crashing. His crew discovered after McCreadie transferred through a B-main that the carburetor booster broke off and hung the throttle open; with the booster falling into the engine, the car was parked, T-Mac took a lap in the A-main in Charles Powell Jr.’s car and the team’s second Sweeteners Plus Longhorn house car was prepared for Saturday-night duty. … Chris Madden of Gray Court, S.C., lost a potential top-10 finish in the preliminary feature due to a broken driveshaft on lap 23. … Colton Flinner of Allison Park, Pa., switched to his Rocket car for the evening card after the engine in his Kryptonite machine sustained a broken rocker arm this afternoon.

The Firecracker 100 weekend — condensed to one jam-packed day of action after the Thursday and Friday preliminary programs were washed out — concludes Saturday night with the $30,000-to-win finale.

After Saturday afternoon’s preliminary program ended at 5:30 p.m., the grandstands and pit area were quickly cleared and reopened and driver registration began at the World of Outlaws trailer. The drivers’ meeting was set for 7:30 p.m. and officials were hoping to send cars onto to reworked track for hot laps at 8 p.m.