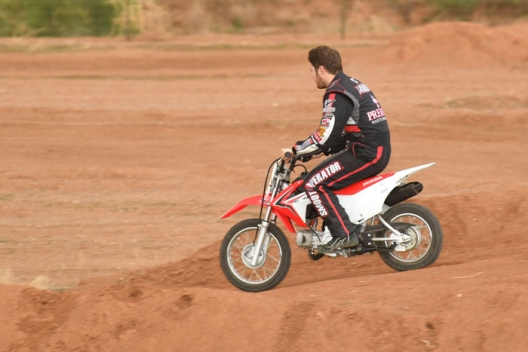 Tom Macht/photofinishphotos.com
Bobby Pierce tries out the motocross track during a rain delay.
Key notes: Watch every lap live on pay-per-view at DirtonDirt.com (click upper righthand corner of site for details and ordering). ... Bobby Pierce of Oakwood, Ill., has three victories and is on the cusp of a $50,000 Keyser-sponsored bonus for four victories. He'd get $100,000 if he can win the final two events.
Who to watch: Chris Simpson of Oxford, Iowa, who has three runner-up finishes and a third-place finish in his four starts.
Points chase: After four races, Bobby Pierce (273 points) leads Chris Simpson (260) in miniseries points. The champ receives $3,000 from a $10,000 points fund.
Car count: 42
Editor's note: Results and race details are unofficial.
By Todd Turner
DirtonDirt.com managing editor

Spotty afternoon showers forced the postponement of the fifth round of the Keyser Manufacturing Wild West Shootout, requiring a split doubleheader on Sunday to complete the event.

Bobby Pierce of Oakwood, Ill., continues his pursuit of a $100,000 bonus today at Arizona Speedway for the fifth round of the Keyser Manufacturing Wild West Shootout.

The 20-year-old on Friday notched his third miniseries victory in four starts and is on the cusp of a $50,000 bonus paid out to any driver who can win four desert races. A Saturday-Sunday sweep at the third-mile mile oval would bump that bonus to $100,000 as part of the program for the Keyser Quarter-Million Challenge, which also offered $250,000 to any driver who could win all six races.

Billy Moyer of Batesville, Ark., is the only driver to break through against Pierce, winning Wednesday’s race, and he’ll try along with three-time runner-up Chris Simpson of Oxford, Iowa, to derail Pierce’s bonus chance.

Saturday's program is in hurry-up mode and starting an hour earlier with rain in the forecast later in the day. Hot laps are scheduled for 2:30 p.m. and racing at 4.

Saturday's event is the fifth of six races over nine days at the third-mile oval southeast of Phoenix.

After a few early afternoon sprinkles, a light and brief rain shower hit the track just before the 2:30 p.m. scheduled hot laps, delaying on-track action. Scattered showers were on the radar with a 50 percent of rain most of the day. … Officials called for cars from all divisions to help pack the track after the rain shower. …. As part of the hurry-up mode with weather threatening, the program has been tightened up, including moving the Pro Power Racing Engines non-qualifiers’ dash to Sunday. ... Jason Krohn of Slayton, Minn., isn’t competing Saturday with plans to fly home because of a family member's medical condition. … Modified ace Kyle Strickler’s ride in the Darren Coffell No. 46 ended after Friday night as the team didn’t unload Saturday.